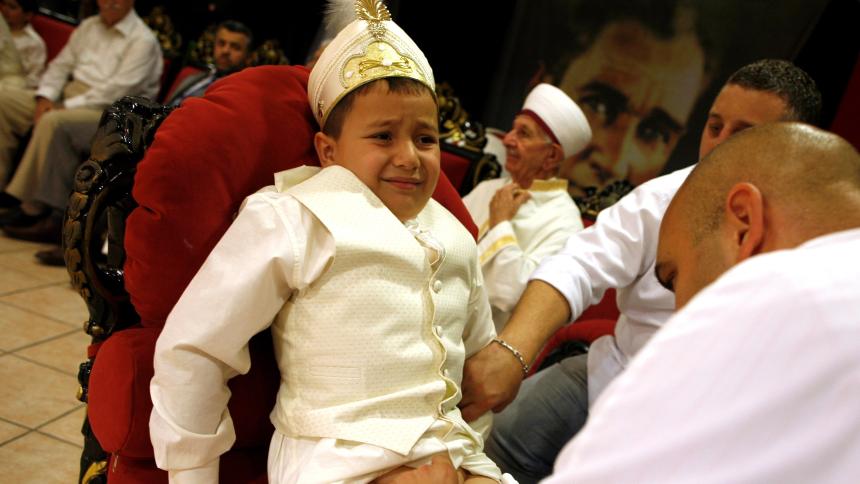 Those of you giggling right now won’t be by the end of this I promise you. No pictures for reasons that are going to become frighteningly obvious.

Before you think I’m on a wind-up, with it being International Women’s Day (at time of posting)….read it all.

Surgical removal of the foreskin of the penis, but you presumably already knew that.

It’s perhaps more usually associated as a religious obligation for Jewish (brit milah/bris) and Muslim (Khatna) males. On Jews, it’s usually done when the boy is 8 days old. For Muslims it varies, but is usually carried out before puberty.

It clearly states in the Tanakh (Jewish canon) that all Jewish males should be circumcised. While it’s not explicitly stated in the Qur’an, it’s generally considered “good practice” (hadith). In both cases it’s generally done for reasons of “cleanliness” or mark of a “covenant”. It’s also carried out amongst some African tribal groups.

There’s no similar requirement for Christians, but it’s not forbidden either. The US and Canada have some of the highest male circumcision rates outside of Africa and the Middle East, but it’s relatively uncommon in Europe and the rest of the world.

Removing the foreskin makes the area easier to keep clean, so there are straight-up hygiene benefits. Sometimes it’s carried out for medical reasons too – for example, to treat phimosis (“tight foreskin”) or balanitis (inflammation of the glans).

There’s also a link (but I don’t think it’s ever been conclusively proven) between circumcision and reduced risk of transmitting HIV. Cells that act as a primary entry point for HIV (Langerhans cells) are removed via circumcision, as well as there being a reduced risk of things like micro-cuts which could spread infection because the glans would become less susceptible to abrasion.

Of course, it doesn’t completely eliminate the risk for obvious reasons and I think far too much is made of this point.

Why is male circumcision controversial?

Firstly, the foreskin is there for a reason. It might not be the most important part of the body – and losing it doesn’t really cause much harm – but it still has a function, namely to – how shall I put it, “improve friction”– by keeping the glans moist. An exposed glans, over time, might become less sensitive as it “thickens” (keratinisation) in response. The foreskin itself also has many nerve endings that could prove useful.

There’s no “loss of reproductive function”. However, removing a foreskin when a male is an infant could be considered a violation of individual rights. An infant can’t, in any way, give informed consent to the procedure. Barring underlying reasons, it’s not clinically necessary. Some anti-circumcision activists describe it as a mutilation.

The procedure for circumcision is simple and straightforward (around 5 minutes). Infant circumcision is pretty safe. As you might expect, like any medical procedure it does go wrong sometimes, with life – sometimes gender – changing consequences.

Actually, trying to place limits on male circumcision is perhaps more controversial. During the German debate, there were accusations of underlying anti-Semitic or anti-Islam sentiments.

As noted at the start, some of you might’ve thought I’m on a wind up for posting this today of all days as circumcision is heavily associated with men, or considered a possible injustice against men. Some of you might’ve thought, “He’s done this as some sort of ‘men have issues tooooooo’ rant to undermine International Women’s Day.” Nothing could be further from the truth.

In fact, this is the “main event”. It’ll probably be painful to read regardless of what’s between your legs. You’ve been warned.

Now, I know how all these things are wired up so I can draw a rough male-female equivalence, which is useful.

Foetuses are female by default. Sex-determining genes decide whether a foetus will mature into a male or female (or in rare cases an intersex). Because this doesn’t happen until a certain stage of development, large parts of genital anatomy between males and females are similar (but not completely identical) in terms of tissues and blood/nerve supply. The major differences are in the arrangement, function and size. Women even have an “equivalent”of a prostate gland (Skene’s glands) for example.

The internal genitalia involved in creating eggs and sperm are different – obviously – but even then they’re similar in terms of overall function. There are also, of course, organs that are gender-specific (uterus, testes etc.).

Female circumcision is prevalent in the Horn of Africa, parts of sub-Saharan Africa and tribal areas of the Islamic world. It’s usually considered a “rite of passage” towards becoming a “clean woman” ready for motherhood.

On a man, that would be the sensory equivalent of cutting off the glans of the penis in its entirety. It would almost certainly be carried out without anaesthetic, with unsterilised equipment and by someone with no medical training.

It’s mainly carried out on girls nearing puberty – so 8-10 year olds, sometimes older. In some cases they’ll die, whether from infections or bleeding to death. Women that refuse to undergo it may be shunned by their families or communities, and may be prevented from getting married – which is as good as a death sentence in some parts of the world.

Short of rare cancers, there’s no medical reason at all, nor any spin-off “benefits” like improved hygiene as with regard male circumcision. It’s done exclusively to eliminate all trace of female sexuality.

Around 85% of female “circumcisions” stop with the clitoris or clitoral hood. It gets worse.

For that other 15%, it involves removing not only the clitoris, but the labia minora and majora too (infibulation). On a man, that would be like putting the scrotum up for the chop. Then, whatever’s left is sewn together, or held together (for example, by binding the legs closed) to allow the scars to “fuse” – ensuring virginity – leaving a small hole for urination and menstruation.

To have sex, the “fused” parts are forced open – sometimes with a knife. That causes a whole host of problems and complications by itself.

As you can probably deduce, “female circumcision” is a euphemism. It’s commonly referred to as “female genital mutilation” (FGM) which is far more accurate. It’s estimated that around 130 million women have had this done to them one way or another. It’s also treated with the highest level of seriousness by organisations like the UN and World Health Organisation (WHO).

After a debate in the UN in December, and a renewed commitment to funding, there could be hope of a global ban on FGM “within a generation.”

In parts of Europe this is beginning to become a problem. That’s usually amongst immigrant groups from the parts of the world mentioned who travel “home” to have this done, or arrive and want to surgery to repair any damage. It’s estimated there are around 60-70,000 women living with this in the UK alone.

Is there a double standard here?

If female circumcision only ever involved removing the clitoral hood – the female equivalent of a foreskin – and was still deemed “genital mutilation” then you would have a point. I doubt you can compare this with women making an informed and conscious choice to have genital piercings either.

Just read the description of what happens again. I’m all for cultural sensitivity and respecting traditions, but….

The point I’m trying to make here is that perceived injustices that might be deemed “the same cause” for both sexes might not be similar at all. It’s issues like this that mean we have/need an International Women’s Day in the first place.

There are millions of women who currently have to endure some of the worst abuses humankind can throw at them for simply being born the “wrong gender” and who don’t have much of a voice – except on days like today.

There is some good news. Female circumcision is completely outlawed in the UK, though it took until 1985 for a law to be passed, updated in the 2000s in both EnglandandWales and Scotland. It’s even against the law for a UK citizen to travel somewhere for the procedure.

Let’s just say that whenever Wales becomes independent we should maintain that policy. However, it appears as though those laws are failing.

Believe it or not, this issue has been brought up in the Assembly a few times by AMs within the context of violence against women, but I doubt anyone would really want to debate this in any real detail now let alone post-independence.

The broader point is that it’s probably worth considering whether routinely “cutting off” parts of the body for no medical reason – for anyone – is really worth it.