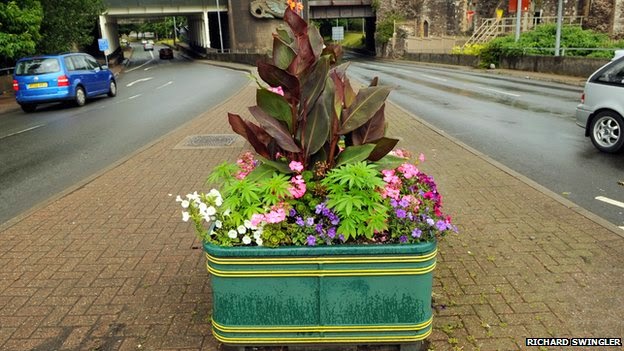 What drugs do people use? The National Crime Survey from 2013 gives a good outline of the sorts of drugs people aged 16-59 use. There are, as far as I can tell, no breakdown of figures for Wales alone, so the following charts represent EnglandandWales.Firstly, it’s worth looking at lifetime drug use to determine long-term trends (spreadsheet Table 1). The figures from the National Crime Survey start in 1996, and also leave some gaps in coverage. 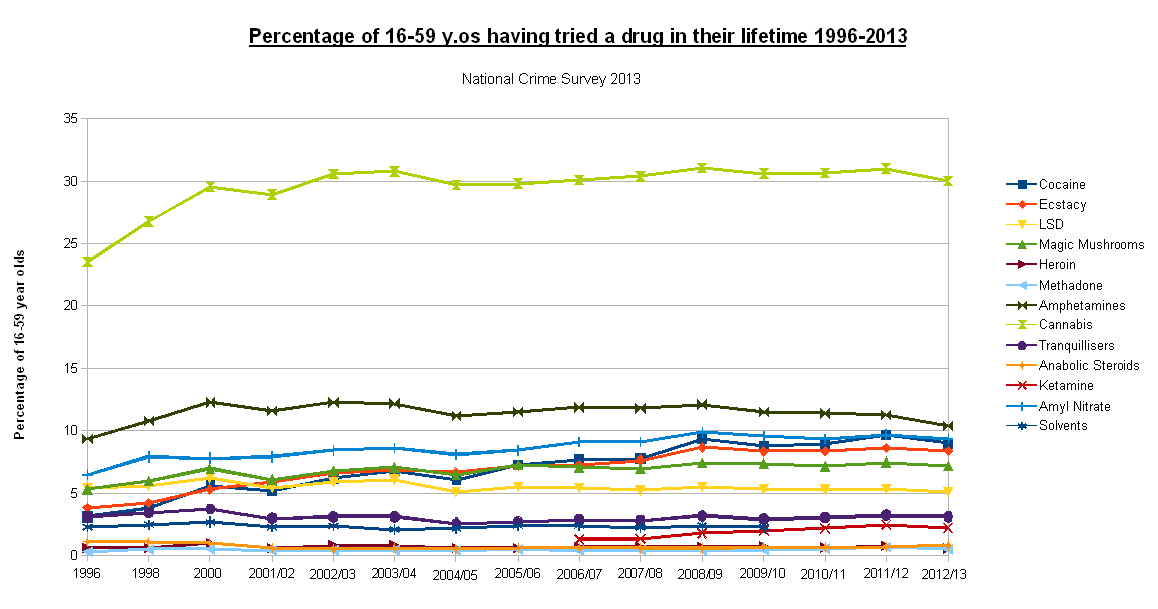 The obvious thing that stands out is that cannabis is by far and away the most popular illegal drug, with around 30% of 16-59 year olds saying they’ve used it in their lifetime. The next most popular drugs are amphetamines and cocaine. The original figures show that the vast majority of cocaine users (around 90% of those who’ve tried it in their lifetime) use the powder form, with the other 10% using the more potent and destructive crack cocaine.

Next, those who’ve taken drugs in the last year (spreadsheet Table 2), and the trends are consistently downwards. 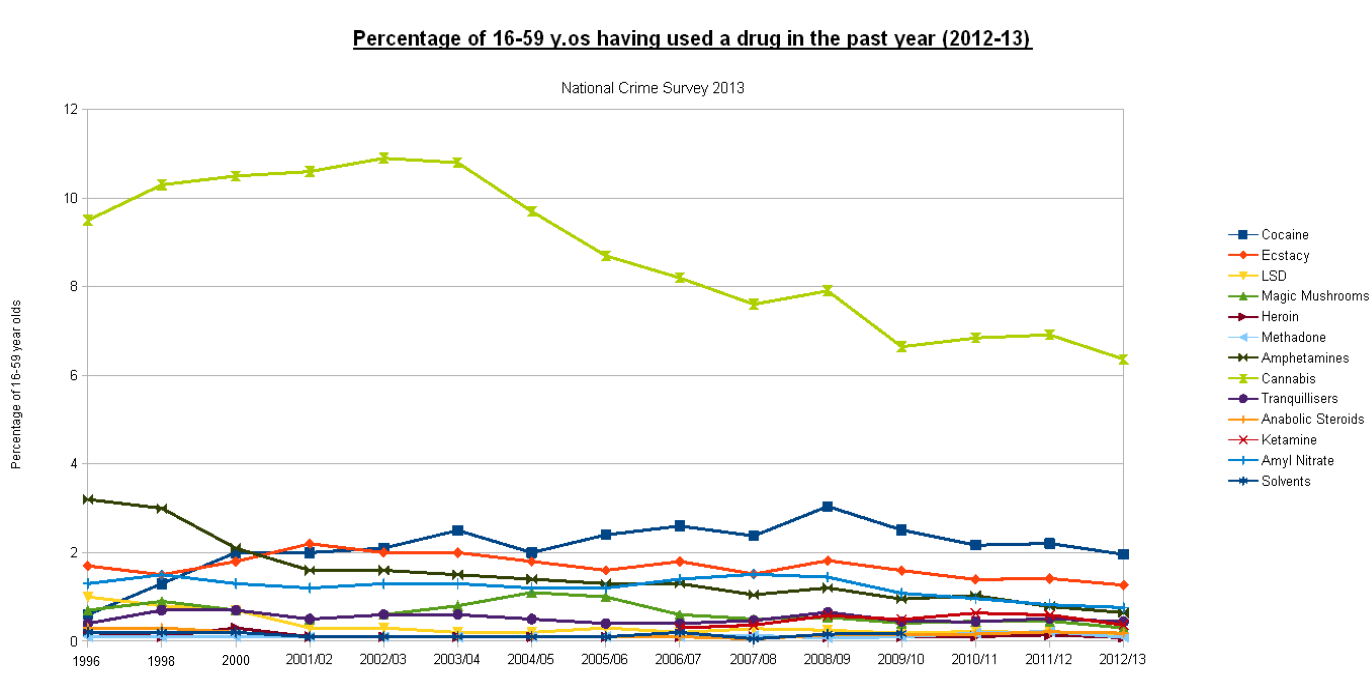 Cannabis, again, remains the most popular illegal drug, with cocaine and ecstasy in a distant second and third place. Similar to the lifetime use figures above, powder cocaine is more popular than crack. It appears cocaine is the only drug that’s more popular now than it was in 1996 (amongst those taking drugs in the past year).

What’s also striking is how low levels of drug use are on the whole. For drugs like heroin and methadone, we’re talking only 0.1% of 16-59 year olds using either in the last year. So there’s no sign of any sort of “epidemic” of drug use – more a low level endemic – and some drugs fail to register in any significant way. The mental image created in some sections of the media of urban decay resulting in streets lined with junkies and drug labs is an exaggeration, if not an outright myth.

So the two sets of data are slightly contradictory. On the one hand, it’s clear the numbers experimenting with drugs at some point in their lifetimes has increased. However, the short-term trends – numbers using in the last year – point to a fall in drug use.

The reasons why I’ll explore in later parts, but now it’s worth looking at where drugs come from and how they get here.

Many drugs are derivatives of plants or fungi.

Some, like psylocibins (magic mushrooms), grow naturally and can just be picked if you know what you’re looking for, though they’re usually dried out before use. In the UK they usually spawn from late spring through to early autumn, though as far as I can tell there are only two types. They’re quite common on moorland grazed by sheep and cows. More exotic varieties only grow in tropical rain forests. Cultivating magic mushrooms is illegal in the UK.

Then there’s drugs like cannabis and salvia divinorium (which is a “legal high”). Cannabis can sometimes be grown from bird seed because the seeds are from the hemp plant, which is a tall-growing variety of cannabis often seen as useful because it has plenty of “legitimate” purposes. Although it sometimes grows wild – or not so wild in the case of Newport – in terms of the drugs market, it’s often grown on an industrial scale in illegal hydroponic factories located in ordinary homes or isolated buildings like barns. Cannabis seeds in themselves aren’t illegal, but it’s illegal to cultivate them.

The “strength” of the cannabis depends on the concentration of tetrahydrocannabinol (THC). Some processes, like those used to create cannabis resin, result in higher concentrations of THC. Some grown strains of cannabis – like “skunk” – do too.

Drugs like LSD, ecstacy, amphetamines and methedrone can be made from widely-available industrial chemicals.

Some of them – like methamphetamines and its various forms like crystal meth – can be synthesised by pure chemical reaction from a series of precursor chemicals.

However, you need a degree-level foundation in organic chemistry to even attempt to manufacture these drugs, often requiring something approaching an industrial laboratory to make it economical. Most illegal drug operations might appear – on the surface – not too dissimilar from legitimate pharmaceutical companies. Others are a bit more amateur, with plastic bottles and what not.

I’m defining “exotic drugs”as those narcotics, and their raw materials, that can’t be produced/grown in Wales naturally from start to finish. The obvious examples would be cocaine (a derivative of the tropical coca plant) and opiates like heroin (which come from opium poppies, which aren’t grown in Europe).

It’s worth remembering that crops like coca aren’t exclusively used to manufacture drugs, and have other legitimate uses – like cosmetics, teas and as a commonly-used stimulant (by chewing) in some parts of South America. Coca is no longer used in cola soft drinks as far as I can tell. The use of raw coca leaves is heavily restricted, often to traditional uses or for scientific research – though it’s still legal in some countries like Bolivia and Peru.

Although it’s difficult to pin down exact figures, the closest firm estimate (from the United Nations) is that the illegal drugs market was worth $320billion (£192billion) annually in 2003 – roughly four times the entire Welsh economy, and more than the world’s film ($90bn) and gaming ($80bn) industries combined.

So how can such an illicit “industry” thrive when there’s been concerted global efforts – a “war” no less – to stamp it out?

A potential 467 tons of opium poppies were processed into drugs like heroin in 2011, dominated in terms of production by Afghanistan (another glorious war), Myanmar, Pakistan and Guatemala.

Most of the world’s coca was produced in Colombia, Peru and Bolivia (total of 149,200 hectares). In 2008, the best estimate for the potential amount of 100% pure cocaine produced in South America was 865 tons. Based on a price at the time of $200 per gram (p38 of the report), that’s potentially worth $157billion.

So as you can see, coca plants and other drug crops have become so lucrative, and are in such high demand, that in parts of South America and Africa it’s an economic necessity for farmers to grow them. Despite the best attempts by authorities to stamp it out – going as far as using herbicides – it’s unlikely to end soon. Some strains of the coca plant have even shown resistance to herbicides.

These drugs have to get to market too. Drugs trafficking is often treated as an incredibly serious offence – regardless of your legal jurisdiction – carrying the death penalty in parts of south east Asia, or life imprisonment.

So the next time someone wealthy, powerful and – most importantly – middle class decides to dabble in a cheeky bit of Colombian marching powder in a wine bar, it’s worth remembering precisely who’s getting it to them : some of the most unpleasant people imaginable.

That’s exemplified further by today’s news of £1.9million worth of drug seizures from organised criminal gangs in Wales in the past year – 0.001% of the global drugs trade. Think of how much effort and manpower went into that. I’ll return to it in more detail in Part IV.

There are very clear “trade routes” not unlike other historic examples such as silk, spices and slaves. Cocaine from South America and West Africa gets into North America via Mexico and the Caribbean; and to Europe across the Atlantic or via North Africa. Opiates make their way through Central Asia and Eastern Europe, or across the Pacific to Mexico.

As to precisely how they’re moved, there are less creative ways – like straightforward bribery or corruption. Then there are “brute force” ways like digging tunnelsunder the US-Mexico border, or smuggling them via a body cavity or luggage. There are also more creative ways like fake breast implants, submarines or using cannons to physically launch drugs over borders.

The market will always find a way, even when said market’s blacker than black.

The Drugs Market at Home

When I were’t lad, ice cream men would be more than willing to sell us fags. That’s evolved down the years, and I’ve heard stories of pizza deliveries coming with many different types of “cheese” and “toppings”.

Narcotics aren’t something you can pop down the shop to buy obviously, but what’s clear is that if you know where – or, more accurately, who – to go to, you can get them pretty easily. Sometimes they’ll come to you.

The latest statistics I could find for drug availability are, again, from the 2012-13 Crime Survey for EnglandandWales (spreadsheet). 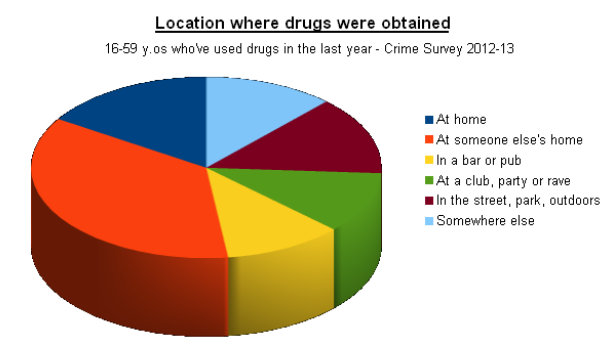 Where you buy drugs is also partly dependant on your neighbourhood. You’re least likely to buy drugs at home if you live in “Prospering Suburbs” (11%), and most likely if you live in a “Multicultural”, “City Living”, “Blue Collar” or “Constrained by Circumstances” area (18-20%).

This could be down to policing strategies, with more high-visibility patrols taking place in built up areas at the expense of more prosperous areas like suburbs. That might mean drugs can be openly sold outdoors in a suburb with little risk because the police don’t expect to see it or aren’t looking out for it.

And it’s plainly obvious that someone living in your Lisvanes and Radyrs won’t want a known dealer in their home, while in an urban high rise there’s little choice in the matter. 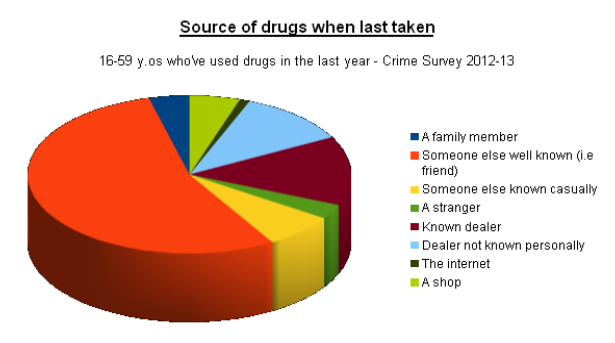 As for the sorts of people drugs are bought from, the vast majority get drugs through friends (54%) or known dealers (14%). The internet (1%) and shops (5%) are hardly going to advertise the fact they sell narcotics, so their low score is unsurprising, even with the moral panic caused by websites like The Silk Road. It’s too risky for all involved, though I’m surprised the shop figure is that high (excuse the pun).

There are no major differences in terms of who you buy drugs from based on demographics or socio-economic background – though you’re significantly more likely to buy drugs through friends if you live in a city (66%) and more likely to buy via known dealer as opposed to a friend if you’re a man (17%) compared to a woman (9%).

It’s also worth pointing out that someone who uses drugs regularly might consider a known dealer to be a friend anyway.

64% of users took drugs either at home or in someone else’s home, 12% at a rave or party, 9% in a pub or bar and just 7% in the street/outdoors. These figures are fairly uniform across all demographic and socio-economic profiles.

With the exception of those who take drugs outside –only 39% of people who bought drugs outdoors took drugs outdoors – drugs are usually taken at point of purchase or at home.

To conclude, it appears illegal drugs:

All this has a logic behind it. Buying and selling drugs in someone’s home or at a party makes it harder to prove wrongdoing and harder for the police to monitor. As long as it’s inconspicuous, it won’t draw attention from other people either, like neighbours. It also implies organised criminal groups aren’t as involved in the actual sale of drugs, but solely in trafficking and supply, leaving sales for others on the ground.

Part IV looks at the role current Welsh public policy is playing in the “War on Drugs”.