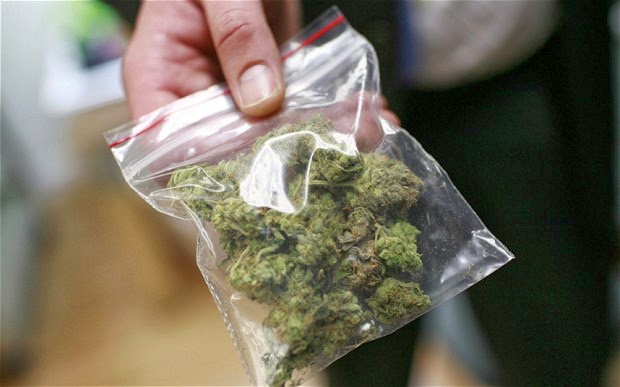 As well as material considerations (covered in Part III & Part IV) , the biggest psychological/sociological indicator as to whether prohibition is having an effect are attitudes towards drugs.

The Home Office have data on this from 2012-13, covering attitudes towards cannabis, cocaine, ecstasy, heroin and “getting drunk” (spreadsheet).

It points towards a hypothesis that if you use a drug, you’re more likely to think it’s acceptable to do so, regardless of the relative health risks posed by the drug itself. So attitudes towards drug-taking might not be influenced by warnings on safety or legal concerns, but by personal experience of using the drug, social proofing and conformity.What again stands out are the socio-economic differences. Drugs are more tolerated amongst the wealthy, professionals and the well-educated; and less so amongst the deprived, blue collar communities and less-educated. There are also hints that messages regarding alcohol consumption are going unheeded amongst younger age groups, despite a hardening attitude against other drugs.An explanation could be that the chattering classes don’t live cheek-by-jowl with the negative side effects of the illegal drugs trade – in itself is a result of prohibition. So those who come into contact with that side of drugs on a more regular basis – abandoned houses used as factories, high levels of burglary, street dealers, police raids and street gangs – are likely to take a harsher line.It could mean that attempts to educate people about drugs have predominantly been focused on less well off communities, whilst falling on deaf ears in posh suburbs, sixth forms, colleges, universities and swanky urban residences.

It could also mean that the professional classes don’t see drug-taking and getting drunk as much “their problem” as the deprived. That could be due to media portrayals of drugs or a form of indirect classism (Part VI).

Drugs: How do we determine their safety?

All drugs – even prescription medicines and legal drugs like caffeine – carry risks. They just affect the body and mind in different ways and in different doses.

As mentioned in Part I, illegal drugs are placed into three categories (A, B, C) based on the advice of the Advisory Council on Misuse of Drugs(ACMD). The ACMD includes doctors, pharmacologists, police and people from third sector agencies involved in substance misuse. UK Home Secretaries are obliged to consult with the ACMD before introducing new regulations before the UK Parliament.

The ACMD’s job is to review each and every illegal drug and determine their harmful physical and social effects, then advise the UK Home Office as to what class the drugs should be placed into, and what measures should be taken in legal and health terms.

Prof. Nutt set up his own Independent Scientific Committee on Drugs after being sacked from the ACMD for his criticism of political involvement in the classification process (in this case cannabis and ecstasy) at the expense of scientific evidence. There’s a case in point where former Home Secretary, Alan Johnson, said he would ban methedrone (meow-meow) as soon as he received the ACMD report. I believe that’s known as predetermination.

Prof. Nutt developed a rational scale to determine the relative harm of recreational drugs by plotting the risk of dependence versus the risk of physical harm. The result was this chart, related to what was published in The Lancet: 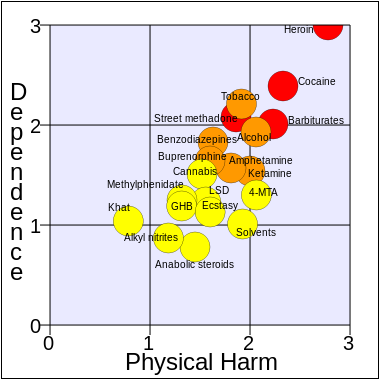 Three drugs that would almost certainly be controlled substances if they appeared on the street today are caffeine, nicotine and alcohol.Alcohol and nicotine would arguably be Class A drugs, both being a moderate step down from cocaine in terms of dependency and lethal dosage. According to research published in Scientific American, you’re almost four times more likely to become addicted to tobacco (32% who try it go on to become addicted) than cannabis (9%), while tobacco is very close to being as addictive as cocaine.

Caffeine would probably be a Class C drug due to its stimulant effects, dependency potential and dangers to the heart if over consumed.

LSD, ecstasy, cannabis, magic mushrooms, khat, GHB, poppers, ketamine….all of them are less dangerous to a user and wider society than tobacco and alcohol – supported by hard evidence.

The drugs that stand up to the “dangerous drug” label are cocaine, heroin, barbiturates, methadone and methamphetamines. You have to include alcohol and tobacco in that too.

One thing we should take from this is that there’s absolutely no difference in danger between “natural” and“synthetic” drugs – and it’s perhaps one of the most dangerous myths about drugs out there. Opiates are as natural as they come – poppy seeds – but will easily kill a person if abused and are amongst the most addictive narcotics. Meanwhile, there’s hardly any harm at all from pure chemical LSD as long as you’re in a safe environment.

It’s almost funny that a psychoactive mushroom is a Class A drug. You’re not even allowed to grow them accidentally “for your own safety”, even though they’ll do little harm to you at all.  A Dutch study (here) on psilocybins found that although toxicity was “moderate”, the potential for physical and psychological dependence was low, and “criminal aspects negligible”.

Meanwhile, a death cap will kill you in a day or two but is completely legal to cultivate.

All this underlines a culture clash between science and politics; not only on the issue of drugs, but other areas of public policy like climate change, abortion laws, genetic engineering….

On drugs, we currently don’t have evidence-based policy making, but policy-based evidence making.

Scientists don’t have the luxury of cherry-picking data to present an argument, and science is largely immune from public pressure and spin.  Ultimately, that’s where you find the truth on the harm drugs really do cause. Absolutely everything points to many commonly-vilified drugs being far less harmful to users and society than their current criminal status implies.

However, nobody elects scientists, there’s no responsibility to the public as a public official, and no wider moral or ethical considerations to take into account when drafting policies or deciding actions.

With pressure from the media, constituents whose lives are blighted by the drugs trade and the electorate at large – most of whom are scientifically illiterate – politics, almost always, wins in the end. That’s even if scientific evidence screams the opposite course of action.

For whatever reason, no politician wants to be seen to be “soft on drugs” – I’ll go into more detail in Part VI. If clear scientific evidence on harm and risk is overridden, it makes you wonder what the point of the ACMD is.

We may as well leave the decision on drugs classification to the police and press. Think of how many things would be illegal now if that were the case?

Drug-taking is generally seen as socially unacceptable – …..though attitudes are softer towards cannabis (in particular), as well as cocaine and ecstasy depending on your social group. The hardening attitudes amongst younger age groups stand out, and it could be that information about drugs has improved to such an extent that young people are able to make a more informed decision, and decide against taking drugs like ecstasy. This is also exemplified in the numbers taking drugs in private – because it’s not something people want to be seen to do, unlike alcohol and tobacco.

Drug taking is generally viewed as “unsafe” – Even with the best evidence possible pointing in the opposite direction, the public at large still believe drugs like cannabis and ecstasy are more dangerous than alcohol and tobacco. Scare tactics sometimes work, and it’s very easy to create soundbite headlines about people dying from the latest street drug – even if those claims aren’t true. Add the reluctance amongst politicians to challenge failing, but popular, policies and you can certainly say prohibition is well in control, but based on (in scientific and some medical terms) a false premise.

Drug convictions have risen and overall drug use is falling – Drug education and law enforcement efforts to clamp down on the domestic supply and manufacture of drugs are clearly working, as highlighted in Part III and Part IV. The falls in drug use could even be a direct impact of increasing drug seizures by police, making drugs harder – but not impossible – to buy. That does, however, increase the risk that drugs could be mixed with more dangerous cutting agents, or drugs produced here will me made stronger in order for supplies to last longer – both being contributing factors in the increases in drug-related deaths in Wales.

The number of people experimenting with drugs is rising – One of the stand out findings in Part III is that while the number of people using drugs in the last year has definitely shown a decline, the number of people actually trying drugs in their lifetime has risen. Clearly, despite all the education programmes, scare tactics, headlines and education programmes, it hasn’t made a difference in terms of people accessing and taking drugs. In fact, the problem seems to have gotten worse in the case of cocaine and ecstasy, and it hasn’t made a dent in cannabis use. So all the fuss over whether cannabis should be Class B or C was worthless.

The drugs trade’s as big as it’s ever been….and growing – If one of the key goals of drug prohibition was to restrict supply it’s been a catastrophic failure (Part III). A single police raid on a factory, or assault in the jungles of South America, might take several million pounds worth of cannabis or cocaine off the streets. That won’t make a dent in the multi-billions organised drugs gangs make each year, and it won’t stop poor subsistence farmers growing drug crops. The War on Drugs is too lucrative to too many people – and that includes the authorities. Drug raids and putting kilos of cocaine on the table are excellent PR – as are successful convictions. But they do absolutely nothing to protect people or their communities. At the end of the day, they’re just numbers.

Hypocrisy on legal drugs – If prohibition were working, we wouldn’t tolerate the use of any recreational drug. Abusing alcohol is seen as an unpleasant, but largely acceptable, vice. Smoking is almost viewed as heroic since laws clamped down on public use. Nobody mentions caffeine, yet it some aspects it’s arguably on level pegging with amphetamines in terms of physical harm – especially if mixed with alcohol. None are seen as criminal for largely pragmatic cultural and traditional reasons. They’ve done more damage to the health and well-being of wider society than all other recreational drug use combined, yet they’re completely legal, regulated and taxed – tolerated even. Perhaps not even considered drugs. Beer’s a drink, innit?

If drug powers were devolved, or if Wales were independent, and if the government of the day decided to continue with drug prohibition, what sort of policies could they enact?

The best way to reduce drug use is to solve the big socio-economic and health issues where drug use is a symptom (Part II):

In terms of specific drug-related policies, there no real need to diverge away from the current track (Part I and Part IV), but here’s some ideas.

Repeating what I said in Part IV, the War on Drugs is at a stalemate.

It’s increasingly coming down to whether policy makers should admit defeat on prohibition? Or where, and in what form, the next “big push” to win the war will come from?

I suppose I’m saving the best till last. Part VI – Why haven’t drugs been decriminalised or legalised? Should they be? How could drugs be legalised in an independent Wales?