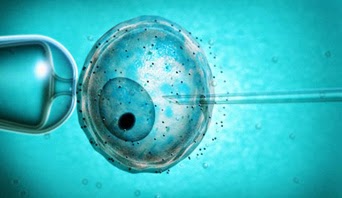 In this final part of (and last minute addition to) the “Life, Ethics & Independence” series, I’m looking at the touchy issues of fertility treatment and surrogacy.

As much as I would like to draw you a picture, I don’t think I need to.

When a man and a woman love each other very much, so much so they forget to use contraception, you end up with a screeching, defecating bag of flesh known as a baby. That’s how it’s supposed to go, but biology has a nasty habit of playing dirty tricks.

A woman’s peak fertility is during their mid-20s, and starts to decline more rapidly after age 35. The quality of the eggs decreases, and the chances of conceiving diminish even though the women themselves haven’t hit menopause.

After age 40, the chances of a woman conceiving are usually way below 50% .The risk of carrying a child with serious abnormalities increases due to the declining quality of the eggs and their genetic material. For conditions like Down Syndrome, for example, the chances of it occuring increase exponentially if the mother is aged 35+.

There are a number of factors which impact female fertility, such as androgen/hormone sensitivity, endometriosis, polycystic ovaries, various forms of cancer (including use of chemotherapy generally), lifestyle problems and sexually transmitted diseases (STDs) like chlamydia.

Although men are broadly capable of fathering children until the day they die, there’s also a decline in sperm quality with age. So contrary to popular opinion, men have a “biological clock” of sorts too, and sperm quality is just as much a factor in birth abnormalities as egg quality. The factors affecting fertility in men are also broadly similar to women (substitute menopause with erectile dysfunction) – cancers, poor lifestyle (like wearing skinny jeans – I’m not kidding), genetic disorders (like Kleinefelter Syndrome) and STDs.

Fertility is important from a socio-economic perspective. The total fertility rate (TFR) measures the average number of children born to a woman over her lifetime. In 2012, the Welsh TFR was 1.88 (pdf), and in 2010 this varied across different local authorities as you’ll see below. 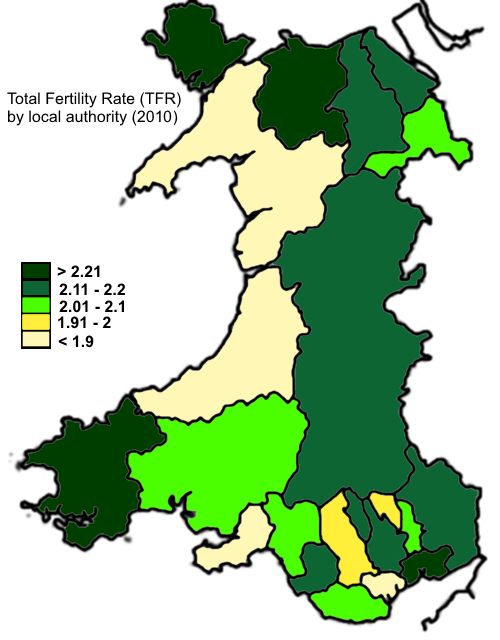 One of the first things that pops out is the higher fertility rate in Anglicised parts of Wales – SE Wales and the border. I’ve said it a few times but this will inevitably have an impact on things like the Welsh language. You’ll probably also notice that local authorities with higher proportions of resident university students (Gwynedd, Ceredigion, Swansea, Cardiff, RCT) have lower fertility rates.

At the moment the Welsh population is in a natural moderate decline.  So forget “Offa’s Gap“, we have another problem in “Offa’s Chap” too.

In some parts of Europe (countries like Italy and Germany) and countries like Japan and Singapore (Google data link) there’s a much sharper fertility decline. This means populations will become older and the dependency ratio will increase (Census 2011: Demographics II), meaning people of working age will have more older people and retirees to support financially, putting pressure on social security and social care systems.

The reasons why fertility rates are falling in the developed world could include:

Traditionally, governments have attempted to shore up birth rates through financial incentives – whether things like tax breaks, tax credits, or welfare payments like child benefit. Other options include increased immigration of adults of childbearing age.Post-independence, tax incentives and managed immigration would probably be the easiest way to do this without stoking fears of welfare dependency – but you would also have to factor in things like affordable housing, fair rents, higher wages, affordable childcare, reducing student debts and even things like free or subsidised relationship counselling. It’s about “happiness”, “well being” and a feeling of security as much as money.Do people have a “right” to reproduce?When discussing bodily functions – like it or not, having children is no more or less a biological function than going to the toilet – you have to separate natural rights from civil/legal rights. Natural rights govern all those rights that are innate and can’t be policed by society. Legal and civil rights govern all those things that can be policed by society based on what society decides as a whole is right or wrong.

With the impact every single newborn has on society and the environment, having children needs to be carefully considered; and in the developed world it’s as much a lifestyle choice than an absolute necessity. It might well be a “natural law” right, but it should never be considered a fundamental human or civil right, extending to include access to fertility treatments.

There are several high and low-tech fertility treatment methods. Each completed procedure (which results in successful fertilisation) is called a “cycle”:

Fertility treatments are commissioned by Health Commission Wales. In 2010, the Welsh Government decided that women were eligible for two cycles of fertility treatment on the NHS. In all other cases, fertility treatment is carried out privately. Each cycle of IVF costs around £5,000, but research into new techniques in Belgium could bring the costs dramatically down to just £170 per cycle.There are currently four centres that treat Welsh patients – Liverpool Women’s Hospital (North Wales), Royal Shropshire Hospital (Mid Wales), University Hospital Cardiff and Neath Port Talbot Hospital.In 2011 (pdf p8), the waiting times for the first cycle fertility treatment were between 12-18 months, and 26 weeks for a second cycle. Also in 2011, around 3,000 couples went to GPs with fertility problems, and around 630 of those would be referred to specialists for high-end treatments like IVF.

The Embryology Act & The Sperm CrisisPowers over embryology, surrogacy and human genetics are matters reserved to Westminster (Schedule 7, Government of Wales Act 2006) and would likely only ever come to Wales through independence.

The UK law currently governing fertility treatments (and other things, like the use of sperm and eggs) is the Human Fertilisation & Embryology Act 2008, and the body empowered with policing it is the Human Fertilisation and Embryology Authority. The law regulates the use of embryos, bans things like sex-selection of children and grants same-sex couples the right to become the legal parents of a child conceived artificially.

What it also did is (effectively) remove the anonymity of sperm donors. Since the Act, any man whose sperm is used to inseminate a woman privately (as opposed to in a licenced clinic) is legally the child’s father. Being a legal parent means the sperm donor and the child will have a right to contact each other, while the father is possibly liable to pay child support.

However, any man who donated sperm (or woman who donates eggs or embryos) after April 2005 – even if done through a licenced fertility clinic – is identifiable and traceable, meaning any child conceived artificially now has a right to the contact details of their donor parent when they turn 18.

It’s believed these changes to the law have resulted in falls in the number of men donating sperm, and a near-critical shortage in the UK. The situation has become so bad that sperm is being imported. Fertility clinics are reportedly accepting lower quality sperm, while there’s a growing, completely unregulated, “market” for sperm donation on the internet.

A single donor’s sperm sample is currently limited to the creation of 10 families, but there are calls for that to be relaxed too due to the shortage.

With independence, Wales could re-grant sperm donating men the right to anonymity, and regulate what can or can’t be done with sperm and eggs (including selection criteria). This could include offering financial incentives to boost sperm and egg donation – both for fertility treatment and scientific research (stem cells, for example – Part IV).

While there are sperm shortages, and relatively low levels of success from multiple rounds of IVF (plus heavy expense), publicly-funded fertility treatments need to be carefully rationed.

The Welsh NHS already has a strict set of access criteria that determine whether a woman is eligible for IVF treatment, based off NICE guidelines:

At the moment, it looks like fertility treatment is open to any woman who wants it and meets the criteria. In light of problems and shortages, is that right and fair?

There are going to be women and couples who have a medical reason that prevents them from conceiving naturally. Then there would be couples who’ve perhaps left it too long and need help to have a first child. A third high-priority group would be women whose partner has frozen their sperm (i.e due to testicular cancer) and who agreed – jointly – to conceive this way.

Then you’re starting to get into social infertility and involuntary celibacy, where women are unable to conceive either due to their sexuality or for personal reasons. This would include same-sex couples (with or without a willing donor) and single women who haven’t found a partner.

If it’s necessary to establish a “triage” for fertility treatment on the NHS, then it’s reasonable that individual cases be prioritised based on the underlying relative medical need.

The first question should be : If fertility treatment didn’t exist, and the patient/couple were otherwise healthy, would they still be able to conceive naturally? If the answer’s “yes”, then medical intervention would be justified because it would be addressing a medical problem. If the answer’s “no”, then the NHS shouldn’t prioritise treatment that would be going beyond the realms of medicine and into lifestyle/elective parenthood.

This is going to sound completely heartless, but children shouldn’t be considered a “right” for every person just because the technology to artificially create them is there. Lacking a conveniently available penis and testicles (or uterus) isn’t a medical problem, and we should consider whether same-sex couples and single women should be excluded from NHS fertility treatment until shortages lift and/or treatments become cheaper.

That doesn’t mean private fertility treatment should exclude anyone, and should probably be the first option for those who can’t conceive but have no underlying medical issues, in the same way as elective cosmetic surgery.

Beyond options like IUI and IVF, the other major option left open to couples with fertility problems (other than adoption – a topic in itself) is surrogacy, where a woman carries a child for another set of legal parents, usually conceived from the sperm of the adoptive father (or one of the adoptive fathers if a gay couple, a sperm donor for lesbian couples).

Sometimes the embryo is created by IVF from the egg and sperm of the adoptive parents, and the surrogate only serves as a “host” (gestational surrogacy).

Surrogacy is legal in the UK as long as the mother isn’t paid, as set out by the Surrogacy Arrangements Act 1985. “For profit” surrogacy is illegal with the exception of reasonable expenses.

In other countries – like India, Thailand and some US states – “for profit surrogacy” is legal.

Other legal issues around surrogacy are very complex. For example, a surrogate mother has the right to keep the child, and is the child’s legal mother until a formal parental order is completed by the adoptive parents.

The issue of commercial surrogacy came to the fore earlier this year when an Australian couple was reported to have left a baby twin with Down Syndrome with their surrogate mother – effectively reducing a surrogate baby to “faulty goods”. Though there are conflicting claims on whether the story’s true or not.

I don’t think there’s anything wrong at all with surrogacy itself, but women renting out their wombs to create children for profit is more than a little distasteful.

If Wales had the powers, through independence, we could consider policies such as: