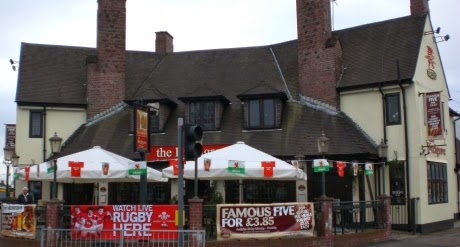 The Alcohol Industry Alcohol remains an important part of the hospitality and manufacturing sectors. The most obvious example would be Brains, based in Cardiff – one of Wales’ largest companies with a turnover of £122million in 2014. Brains, of course, isn’t only a brewery but a wider hospitality company running pubs, hotels and coffee chain Coffee #1.

Other significant Welsh brewers include Hurns (Tomos Watkin) of Swansea, Otley Brewery in Pontypridd and the famous Wrexham Lager (both previous and recent incarnations). There’s been a noticeable growth in “micro breweries” in Wales over the last 5-10 years – often highly niche, small operations that might produce a few hundred caskets a year. According to Drinks Wales – an industry body which represents Welsh alcoholic drink producers – Wales has:

It’s hard to calculate the numbers working in pubs and clubs, or serving alcohol in hotels. Based on a figure from the Institute of Alcohol Studies (pdf) that suggests 650,000 people around the UK are employed directly in the alcohol industry, it’s safe to assume ~32,000 people in Wales are employed directly in the industry.Alcohols are easily combustible and clean-burning (often producing between 25-70% less carbon dioxide emissions than petrol), so are often used as fuels. Because they’re produced from plants, alcohol fuels can be carbon neutral, as any carbon emissions produced through combustion are simply reabsorbed by the next generation of crops.

This does, of course, also mean that agricultural crops make way for fuel crops in a world already suffering serious food distribution problems.Brazil has pioneered alcohol fuel due to large sugarcane plantations, and is one of the world’s largest producers of ethanol, introducing alcohol-fuelled cars as early as the 1970s, which were in turn subsidised through the 1980s. Brazilian car manufacturers developed a “flexi” engine which can run on ethanol or a mix of ethanol and petrol.

In the United States, ethanol produced from corn – widely grown in mid-western states – is blended with petrol to help meet environmental regulations and reduce overseas oil dependence. It’s often sold cheaper than petrol due to government subsidies to corn producers, although said subsidies have proven highly controversial.In Europe; Germany, France, Sweden, Spain and the UK topped the table of bio-ethanol consumption in 2012. Sweden stands out in particular as they introduced financial incentives (like lower car insurance and exemption from congestion charges) to encourage people to buy flexi-fuel cars, as well as converting a large chunk of Stockholm’s bus fleet to run on ethanol.In Wales, the Institute of Biological, Environmental and Rural Sciences (IBERS) at Aberystwyth University is researching the use of crops to produce fuel, in particular breeds of tall grasses. The project has received UK and Welsh Government funding.

According to the Institute of Alcohol Studies report (pdf), UK alcohol sales were worth £38.1billion in 2011 (proportional Welsh share ~ £1.9billion). In terms of exports, however, some 87.9% of the total export value of alcoholic drinks in the UK were whiskeys – which disproportionately favours Scotland.

The Welsh Government aim to increase Welsh food and drink exports by 30% by 2020, with the entire food and drink industry in Wales said to have a combined turnover of £5.2billion a year. It’s unclear how much of this is alcoholic drinks.

In terms of tax revenues, alcohol is liable to both alcohol duties and VAT (20% standard rate). Alcohol duties are based on a litre of pure alcohol. In 2014:

Importing alcohol (in any quantity) also requires some form of declaration unless duty has already been paid by the exporting nation. Importing alcohol from an EU member state requires designation as a Registered Consignee or being part of a Registered Commercial Importer scheme. All alcohol imports from outside the EU are liable to excise duties, customs duties and VAT.

The Economic & Social Costs of Alcohol

The only detailed study in Wales on the costs to the NHS dates from 2011 (doc) and suggests the cost of treating alcohol-related illnesses and injuries ranges from £69.9-73.3million per year – with the bulk of that (around £37million) falling on accident and emergency departments. As mentioned in Part I, Sheffield University research suggests a minimum 50p per-unit price could save the Welsh NHS £131million over 20 years (£6.6million per year).

I also mentioned crime in Part I. Alcohol Concern figures suggest that alcohol-related crime cost England £11billion in 2010-11. There are no separate figures for Wales as far as I can tell, but based on the English figure you would expect a Wales-only figure to be around £620million per year.

So you can estimate that the direct cost of alcohol to Welsh public services is at least £690million per year – more than Wales raises in alcohol duties. However, when you add VAT, employment and business taxes from the alcohol and hospitality industries, it’s reasonable to assume alcohol is – in real terms – close to cost neutral, but that doesn’t account for the human toll.

It’s important to stress the following is based on a moderate/recommended amount of alcohol intake (men 3-4 units, women 2-3 units), once you go over that, the positives are wiped out.

But, as you all well know, there are numerous negative health impacts associated with alcohol:

The three most serious negative health impacts of alcohol use are liver disease, alcoholism/alcohol-related injuries and foetal alcohol syndrome.The liver’s an underrated organ, acting as the body’s “chemical plant”, turning dangerous chemicals (like alcohol) into more harmless chemicals that can be put to use elsewhere, or dealt with more easily by the kidneys and excreted. As a result it’s incredibly resilient.

The liver is absolutely essential for survival and can’t be replaced artificially (unlike the kidneys). The good news is the liver is the only organ that can regenerate itself and compensate for loss of tissue. The bad news is that its very complicated set of functions expose it to a number of diseases, and excessive alcohol intake is one of the leading causes of liver disease.

Once a liver has been damaged to an immediately life-threatening extent, the only option is a liver transplant. Waiting lists are usually shorter than other organs (kidneys, heart, lungs) at around 145 days, but no liver transplants are carried out in Wales, although University Hospital, Cardiff has a general liver surgery unit.

The cruel irony is that people who are unable to abstain from drinking are often removed from liver transplant waiting lists.

The 2014 Wales Health Observatory report (pdf p23) states that there were 34,000 broadly-defined alcohol-attributable (injuries and illnesses where alcohol is a factor but not a cause) hospital admissions in 2012-13. Admission rates for men are almost double those of women.

With regard alcohol-specific hospital admissions, according to the report (p22), the percentage of alcoholism-related admissions are broadly similar between women and men (15.1%-15.2% – 1,628 admissions in total). Women are significantly more likely to be admitted specifically for alcohol poisoning, though nearly twice as many men(6,700) are admitted to hospital than women (3,500) in general terms. Though for both sexes, mental health and behavioural problems are by far and away the main reason for admission.

According to the latest statistics, in 2013-14 (pdf p3), 54% (13,395) of all referrals for substance abuse treatment were related to alcohol. That compares to just 15% for heroin, 9% for cannabis and 3% for cocaine. Alcohol treatment does have some success, with patients, on average, seeing their alcohol consumption drop by 39%, and around 40% manage to abstain completely in the month before leaving treatment.(p33)

Between 2010-2012, alcohol-specific diseases killed 250 men and 140 women in Wales, and at least 1,520 deaths in total were at least partially attributable to alcohol. Mortality from alcohol is heavily-linked to deprivation, though mortality rates from alcohol in Wales are slightly lower than comparable English regions.

Between 2011 and 2014 there’s been a sharp rise in the number of babies born with foetal alcohol syndrome (FAS) across the UK. I couldn’t find any hard figures, but the number of cases in Wales each year are likely to be small – maybe at most 5-10. It’s serious because excessive drinking during pregnancy can cause brain damage, stunted growth and physical deformities.

There are clear guidelines on drinking whilst pregnant, and I’m willing to bet 99.9% of prospective mothers know not to do it. Last year there was an attempt to determine whether a daughter with FAS was entitled to criminal compensationafter her mother drank heavily during pregnancy. The case was dismissed after judges ruled no criminal offence had been committed.