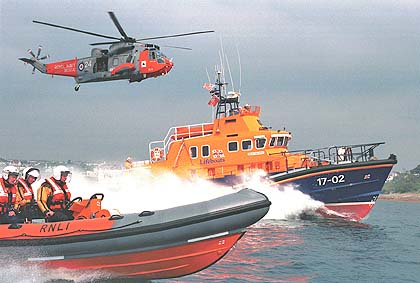 The final “main”branch of a Welsh military to cover is, of course, the naval branch.

The structure of a navy is likely to be a lot simpler than that of the other branches as it’s essentially down to ships and crews – there are no major subdivisions like battalions or squadrons. In terms of crew numbers, you’re probably looking at somewhere between 800 and 1,200 (figure including reservists and lifeboat crews). A Welsh Naval Service could consist of a central headquarters unit, but then three sub-units :

A Specialist Naval Support Division – Services such as diving operations, mine clearance, obstruction clearance, maritime engineering/repairs and the paperwork and regulatory burden of fisheries monitoring, maritime law and marine conservation.

Fleet – An offshore patrol element, which would include the flagship and larger patrol vessels. These would be staffed by their own engineering, signals and other specialists so there’s no need to have land-based support units (though some would exist to carry out dry-dock repairs).

Coastguard – Responsible for inshore patrols and operations (shoreline, rivers, lakes, beaches, shoal/sandbanks), as well as search and rescue and beach lifeguard duties. I’m going to suggest this would be made up of the existing RNLI and HM Coastguard after being brought “in-house”. Precisely how that would happen I don’t know, but it would mean lifeboats would be state-funded and no longer reliant on charity.

The fleet and specialist units are relatively straightforward, but when it comes to the Coastguard, I’m going to suggest that some lifeboat/ Coastguard stations would go full-time with full-time member/members of staff – probably what we now call the coxswain.

Lifeboat crews and lifeguards would be given naval ranks, and part-time staff would be considered naval reservists and eligible for reservist pay and benefits (Part X). The Coastguard would also be able to call on air support from the Air Corp’s Civil Support Wing (Part V) as and when required. 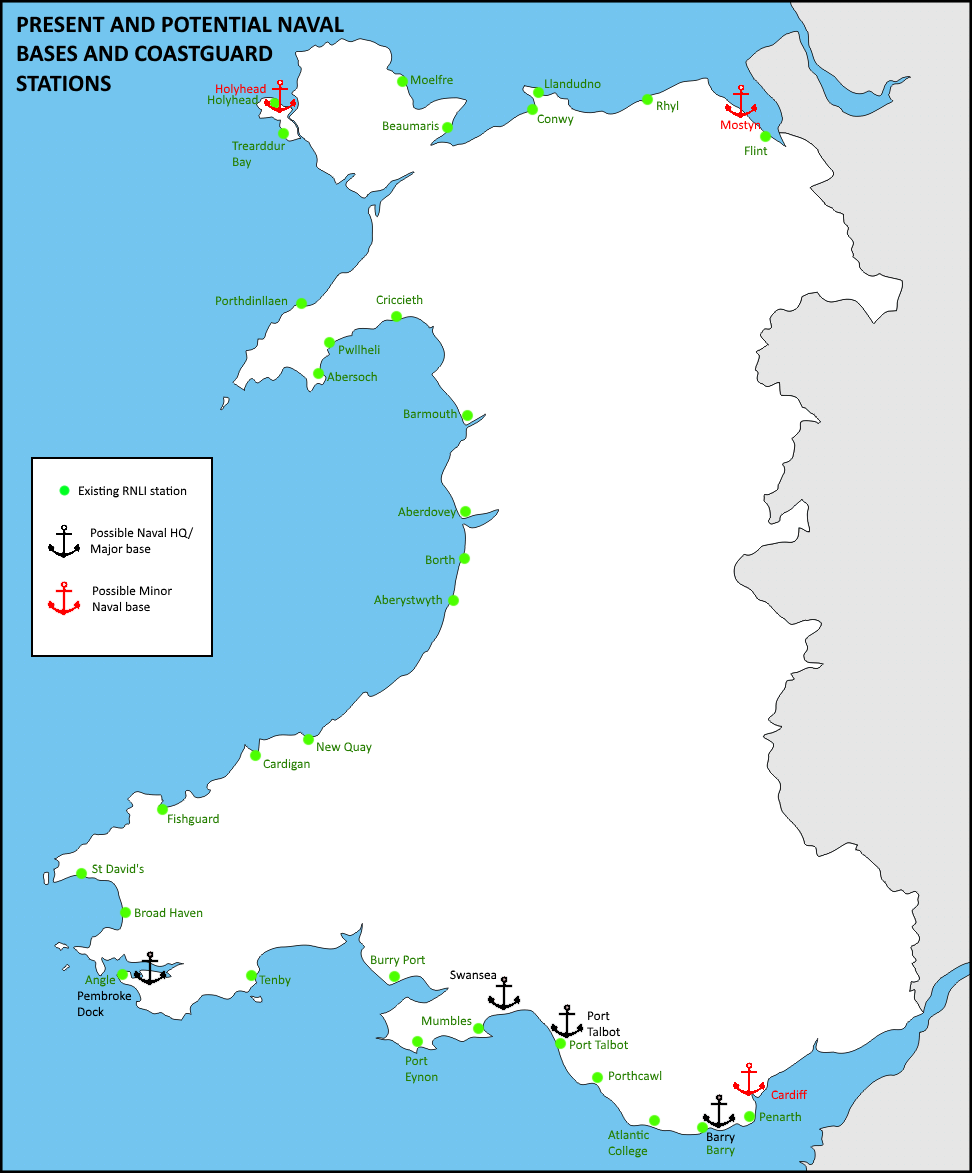 The first thing to consider is a main headquarters and naval base. There are several candidates (pointed out on the map), but the final location needs to have a dry dock for maintenance and repair, enough clearance for ships’ draught and big enough docks for a frigate or destroyer-sized vessel.Port Talbot is a blank canvas and could have a dry dock built, plus is used to dealing with large vessels – but this would require too much capital up-front. Pembroke Dock used to have a small naval base and has a dry dock, but it’s too small for military vessels. So that leaves the three best candidates – Barry, Newport and Swansea.

Newport is Wales’ main commercial port so it’s not worth putting military uses there as they could interfere with operations. Barry would be suitable but is perhaps too cramped. Swansea would be my preference because the docks are easier to access and it’s close to the Atlantic. It would be easy to build a naval headquarters, support facilities and training centre in SA1 too – perhaps based out of one of the proposed developments from Trinity St David’s University.

Holyhead and Mostyn could be used as resupply/refuelling ports but realistically couldn’t be used as full-time naval bases.As said earlier, some coastguard stations would go full time or be manned with at least one full-time member of staff. For the sake of argument – and based on the available facilities and lifeboats – I’m going to suggest : Barry, Mumbles, Tenby, Fishguard, Barmouth, Pwllheli, Holyhead, Llandudno.

There are gaps in coverage where extra coastguard stations could be considered, particularly the southern Gwent coast between Chepstow and Cardiff (which would be covered by Weston-super-Mare presently) and the south western coast of Anglesey stretching across to Porthdinllaen on the Llyn peninsula (the station probably best placed in Caernarfon).

There are, broadly-speaking, three different types of navy.

Superpowers and global powers have navies that can operate in all three environments – even the UK’s Royal Navy has brown and green water elements.

For Wales, we’re probably looking at a green-water navy which can, with some preparation, cross an ocean or two in an emergency. Routine naval operations would be confined to the Irish Sea, Celtic Sea, North Sea, English Channel, Mediterranean and parts of the North Atlantic.

As for how far vessels would be able to go outside of routine patrols, based on the UK’s naval fleet, larger vessels are normally expected to be able to travel 12-13,000km at 33km/h (18 knots). If ships are expected to spend 30 days at seat at a time before needing resupply, the effective range of a Welsh navy would extend to most of the northern Atlantic Ocean, the Mediterranean and the Indian Ocean (via Suez Canal) – though with refuelling stops the range is effectively global.

Range is important because it determines how quickly and how far the navy can respond to things like natural disasters – which is a role you would assume the Defence Forces would be expected to fulfil. At the speeds described, it would take a flagship 9 days to get to a disaster in the Caribbean (which is about 6,700km away) from a Welsh port.

Naval (fleet) vessels – The core of the navy, made up of surface vessels (there would be no need for Wales to have a submarine fleet, though smaller submarines might be appropriate for non-combat purposes). Wales would probably need a minimum of two vessels at sea at any one time; one to patrol the sea and coast to the north, one to the south. I’m going to suggest that over the course of a decade the naval capability is built up to:

Lifeboats – There are two broad types used by the RNLI; all-weather lifeboats that are usually covered and can take on large numbers of survivors (Trent-class, Severn-class, Tyne-class) and rigid inflatable lifeboats that are usually only used in calmer weather (Atlantic-75, D-class). Assuming the RNLI transferred to a Coastguard that’s unlikely to change, though there are plenty of manufacturers to choose from.

Support vessels – This depends largely on whether Wales decides to play to a specific niche – for example, a hospital ship to aid in disaster relief or a minesweeper. The majority of such ships are in the Royal Fleet Auxiliary and you would expect Wales to need at least one large supply ship which could double-up as an emergency hospital ship. Alternativelt, these functions could be contracted out on a commercial basis, with the ships “commandeered” as military vessels when needed – which is how the Royal Navy’s auxiliary ships – particularly roll-on, roll-off vessels – are managed presently.

Based on the Irish Naval Service, you would generally expect fleet vessels to stay at sea for between 28-30 days at a time, perhaps longer in an emergency. Inshore patrols would have a more regimented routine operating on a weekly schedule. Nevertheless, naval personnel will spend extended time away from their families when compared to the other branches. As for their role:

Search & Rescue – Same role as outlined for the Air Corps. While on patrol, naval vessels might be the first on the scene at a maritime accident, while the role of the Coastguard in search and rescue is obvious. If Wales has a corvette then in some circumstances it could serve as a launch pad for quick emergency evacuations by air to the mainland.

Counter-smuggling – With lots of remote beaches, the Irish Sea is a prime avenue for smuggling contraband, particularly drugs, into Britain and Ireland. The Irish Naval Service already intercepts millions of pounds worth of drugs each year, and it would be worth Wales either co-operating with the Irish at a high level or even running joint operations that include the English and Scottish too.

Fisheries protection – Even if Wales remains outside the EU, there’ll still be an obligation to ensure fishermen stick to within set quotas for conservation purposes and to to protect stocks. There’s also an obligation to protect Welsh fishermen from illegal fishing in Welsh waters. The Welsh Government is already responsible for fisheries protection within Welsh waters, with the Royal Navy responsible further out to sea. However, at present the Welsh fishing industry is mostly confined to inshore fishing, with very few deep sea trawlers – probably due to Wales’ small territorial waters.

Logistical support to other branches of the military on water – Self-explanatory. This would include maritime surveillance, sea lifts, taking part in training exercises, amphibious/littoral landings etc.

Protect the public and maritime workers whether at sea or near the shore – This would primarily be the role of a Coastguard and is fairly obvious.

How can the Naval Service protect Wales?

The most likely interaction the public would have with the Welsh navy would be lifeguards and lifeboats, but in territorial waters and further afield, the navy would play a crucial and wide-ranging role – they’d have to be a police force, armed service, search and rescue organisation and  environmental protection agency all at the same time.

Although attacks from the air are lightning fast, due to the vast scale of the sea, the water is any nation’s most vulnerable front – particularly on an island, and even in circumstances where territorial waters are small like Wales.

The obvious military means by which to protect Wales is police action to prevent smuggling and illegal immigration by sea – the odds of a foreign power attacking Wales by sea are slim and would probably come long after an air attack anyway.

The naval service would also play a vital economic role. They would help protect, and perhaps lead a revival of, the Welsh fishing industry, while having an effective Coastguard service would provide reassurance to domestic and foreign tourists that they would be safe on Welsh beaches or near to shore.

Part VII looks at special forces, security/intelligence services and the role of national security in defence and public policy. 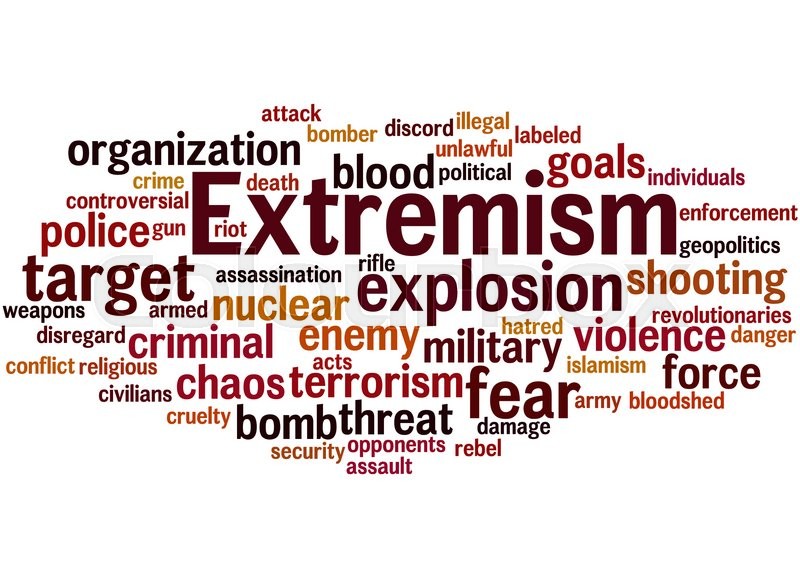 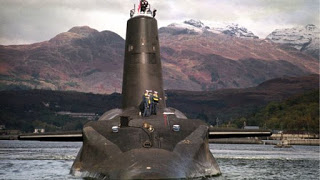 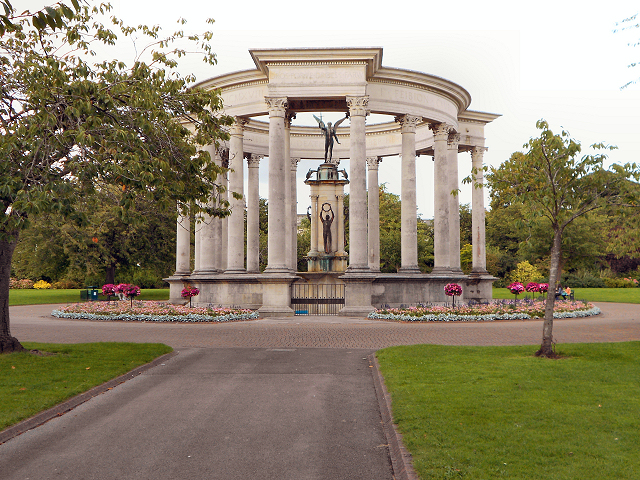