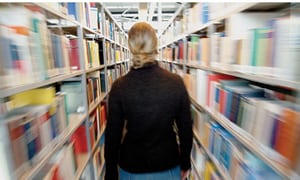 If you’ve ever borrowed books from a public library, you’ve taken advantage of this little known scheme. It’s also one of the plethora of policy areas that are non-devolved and unlikely to be the responsibility of Wales unless we choose independence one day.

What is the Public Lending Right (PLR)?

In short,it’s a royalties scheme by which authors/illustrators/translators receive payment from the government for their works to be loaned by public libraries. Most libraries charge to borrow other mediums like DVDs, while musicians have their own public royalties scheme called the PRS – which isn’t statutory AFAIK.

The rules governing public lending of works are partly the result of an EU directive (2006/115/EC – pdf) which harmonised provisions across the EU. UK legislation – the Public Lending Right Act 1979 – pre-dates this, following a lengthy campaign by writers to receive royalties for publicly-loaned works, which resulted in ten attempts to enshrine it in law.

Between 2010 and 2013 it looked like the PLR would be scrapped by the Conservative-Lib Dem coalition UK government, but it was saved and is now was run as a part of the British Library, receiving £6million from the UK’s Department of Culture, Media & Sport in 2015-16 (pdf).

As for how it works, the PLR maintains a register of libraries which fall under the PLR scheme (university, school and hospital libraries usually don’t fall under it) and can be used to calculate the royalties owed. The PLR does this by recording the number of loans of specific works from a sample of library authorities (usually local councils). The library authorities themselves rotate every four years.

After applying to the scheme, to be awarded a payment under PLR the author’s name has to be on its title page or otherwise be entitled to a royalty from a publisher. Where two or more contributors are involved, the royalties are divided between them, but some contributors (like translators, illustrators and ghost writers) are entitled to fixed shares.

28 countries operate some sort of a PLR scheme, with some notable absentees such as the United States and France.

Maintain the status quo – The Republic of Ireland and UK run a joint PLR scheme, and it’s administered on behalf of the Irish Government from the PLR office in London. So the most obvious answer here is for Wales to simply join the scheme and make a proportional contribution to its running costs (which would be around £300,000 a year).

A bespoke Welsh PLR Scheme – This would have an advantage in that there would be better monitoring of loans from within Wales (instead of crossing our fingers and hoping Welsh library authorities are included in the 4-year sample). More accurate royalties can be awarded as a result. The downside is the increase in bureaucracy and the “if it ain’t broke” factor. Presumably it would be run by the National Library and/or Welsh Books Council and would have a similar budget to that of our contribution to a UK & Ireland scheme (plus administration costs).

Scrap PLR – Considering the rather poxy sums of money authors and contributors get on the whole it’s probably worth considering whether PLR is worth it. I’d imagine many Welsh authors will just be happy someone’s reading their work than trying to make serious money out of it. It might be better to boost the number, quality and amount of money awarded in grants and advances via the Welsh Books Council instead (with an agreement that in exchange for grants, works can be loaned by Welsh libraries in perpetuity). Or, sums of money can be negotiated with individual “big name” authors and their agents/publishers to loan their works in libraries. This could be more expensive but might be a more efficient and fair use of funding.

An automated PLR scheme – Registered authors and contributors would receive a flat-rate automatic payment from the Welsh Government every time their works are loaned (with a minimum payment threshold and no cap on payments). This would require up-front capital to get it off the ground (and would likely cost more in terms of royalty payments) but it would provide far more accurate payments if every single transaction is recorded.

I doubt it would make much difference, but consideration could also be given to making PLR payments to Welsh authors tax-deductible too. Don’t spend it all at once!