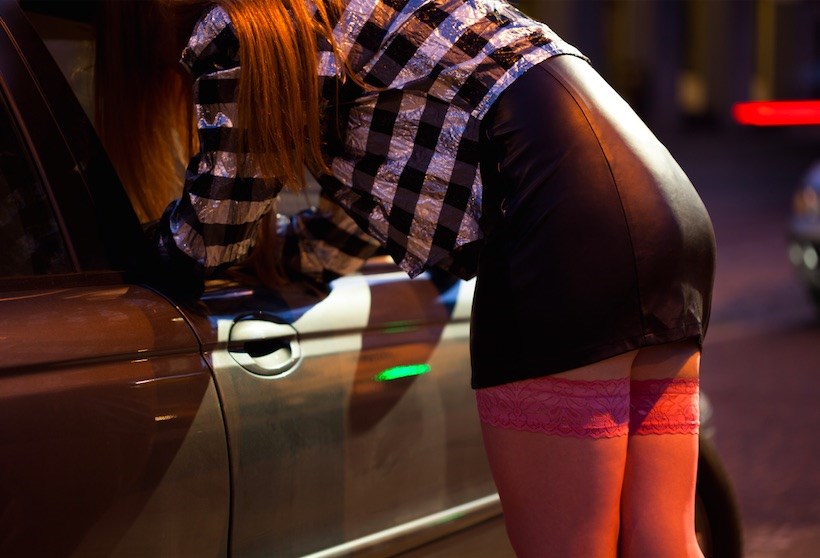 Oh boy. Well I had to come to it eventually (excuse the pun). For perhaps the first time I’m genuinely worried about how this is going to go down (excuse the pun again) because I have a sizable audience of women (40%+) for a political blog….though probably not for much longer.

This is easily going to rank amongst the most controversial posts I’ve ever published, though I’m fortunate to go under the radar 99% of the time. You’ve been warned.

In my defence – and not wanting to get too far off topic – doing a sizable chunk of the heavy lifting with the whole independence thing (and, subsequently, saying and doing things that could get me into serious trouble because nobody else is willing to touch them) is a lot harder than just saying you support independence then not offering any idea on what sort of country an independent Wales should be.

While this would’ve otherwise have been a simple “prostitution is bad” post, some of the things I’ve found here have been an eye-opener.

Breakdown of “The Oldest Profession”Whatever you want to call them – escorts, sex workers, brass, hookers, whores, ho, rent boys – prostitution is as old as civilisation itself. It’s always been associated with the downtrodden, many of whom were slaves or in some sort of indentured servitude, which sadly continues today.In 2014, the Office of National Statistics included data relating to illicit activities – including prostitution – to provide more accurate economic/GDP figures. Another site also analysed data from one of the leading prostitution sites in the UK (which I probably can’t name or link to or I’ll get into trouble).Firstly, a word of warning. The ONS study seems flawed, mainly because of the workload attached to each prostitute. It was based on Dutch figures where laws and rules relating to prostitution are far more liberal – I return to this later.

Anyway, the headline figures are: 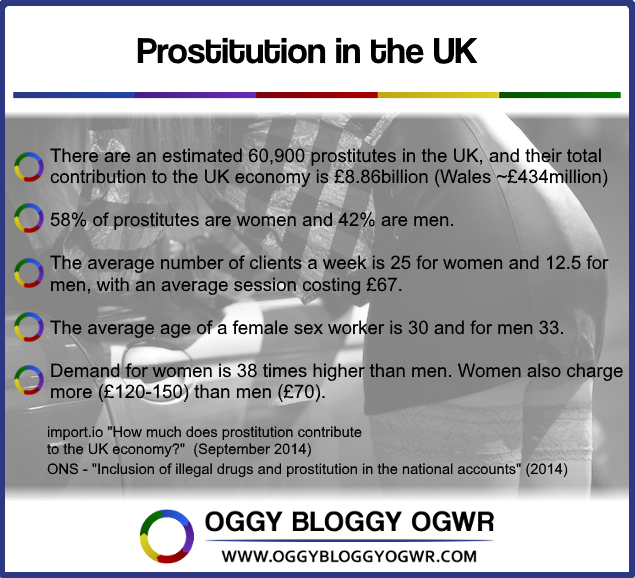 There are also other statistics from multiple sources, but mainly a report from Swansea University (pdf):

Wow. This is one of those rare occasions I’ve been taken aback by something whilst doing this blog. I thought, “None of this can be true”. Clearly I need to get out more. The two things that stand out in particular are the economic contribution of prostitution and the relatively high numbers of men doing it – it’s almost always stereotyped as a women’s issue in the same way as domestic violence.

To put things in perspective, according to these figures there’s a higher proportion of men in the prostitution workforce (42%) than there are working as teachers (24.6% – Table 1.2), though when you take into consideration demand, then that will lean the overall workload heavily in favour of women.

Prostitution and the Law

Prostitution is currently a legal grey area in EnglandandWales. In terms of law enforcement, the police are far more interested in breaking down people trafficking rings and links to serious and organised crime than dealing with massage parlours (which may sometimes be legitimate fronts for brothels) or prostitutes and clients who stay off the streets.

What’s illegal:
The laws are almost identical in Scotland. Northern Ireland has stricter laws and in 2015 banned the purchase of sexual services, with people doing so liable to a year’s imprisonment and a fine of £1,000.In 2007, the then Labour UK Government considered making it illegal to pay for sex, citing similar laws in Sweden (and, subsequently, Northern Ireland). Meanwhile, in 2014 a UK parliamentary committee said current laws were “confusing”. In January 2016 the Home Affairs Select Committee began an inquiry into the legalisation of prostitution….then the Chair, Keith Vaz, was – as you well know – caught hiring male prostitutes. Maybe he’s been playing too much Grand Theft Auto.You have consensual sex for money and film it – that’s legal. You have consensual sex for money and not film it – that’s sort of legal but somehow worse? The Case for Prostitution
Ultimately – your body, your choice. If you want me to be really controversial, then you can – to a certain extent – argue that all sex is a form of prostitution; is spending a large amount of time and money on several dates and then having sex afterwards any different? Prostitutes just cut out the date bit (though escorts usually don’t), while no-strings-attached sex is tolerated and accepted, even fuelled by the dating apps like Tinder and Grindr.Of course that’s an over-simplification and there’s a world of difference between a person who makes selling sex their job and sex in a relationship. Prostitutes perhaps use their head more (excuse the pun) and ignore the heart. I don’t think it’s anything someone would really set out to do unless they’re desperate, see themselves as some sort of sex therapist or are a nymphomaniac – but why not as long as they’re making an informed choice to do so? The Case against Prostitution
If prostitution is exploitative and immoral, with close ties to criminality, then the argument goes that it should be stamped out – regardless of an individual’s rights to do what they want with their bodies, similarly to illegal drugs (Wales on Drugs). Even if the numbers of active prostitutes are perhaps more gender balanced than people might think, a feminist opponent of prostitution may argue (correctly) that the workload is still primarily borne by women, and the purchasers are almost always men – so prostitution is both patriarchal and objectifies/commodifies women.People with more conservative attitudes towards sex and relationships might also believe sex should be reserved for someone you have feelings for, or at least with a view to a commitment of some sort – not bought and sold like a commodity, which cheapens the body. Prostitution, or rather legitimised prostitution, may also encourage cheating.Prostitution & Independence

Devolution of criminal justice would give the Senedd powers here, not necessarily independence – though independence would allow Wales to make a break from the status quo.There are some things that needn’t change so much:

As for what else, there are two broad policy options. Firstly, a clampdown on prostitution because it exploits the people involved (anti-exploitation). Secondly, the approach of tolerance, regulation and legalisation (sex-positive).
Anti-Exploitation (Ban)
Sex-Positive (Full Legalisation)

How much could legalised prostitution raise in taxes? 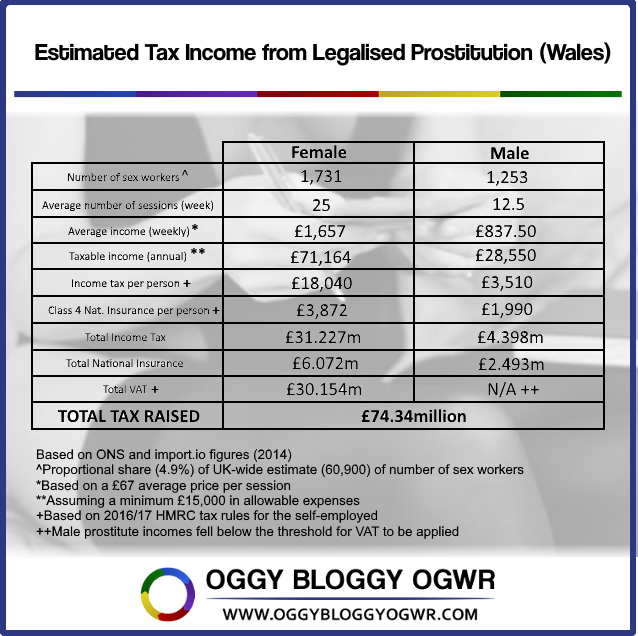 Even if the above figures are a gross over-estimate, then when you add business rates and other tax revenues from alcohol etc. then the £74million figure is likely to hold up. There would presumably be public spending savings in terms of reductions in policing costs, costs to social services and treating health problems too.

My libertarian instincts favour the sex-positive approach. No society has ever managed to eliminate prostitution even when it’s punishable by death, so for the safety of the people involved it has to be properly regulated whilst at the same time offering some measure of reasonable flexibility.

That doesn’t mean the anti-exploitation measures are any less legitimate – if I had a son or daughter I’d hardly be jumping for joy if they chose to become a rent boy or escort, but it’s not as if people dream of working in fast food or cleaning toilets. If that makes me a hypocrite so be it, but it’s not for society to tell people what they should or shouldn’t do if it causes themselves or other people no harm. It’s just more likely to push/keep prostitution underground (which could result in more criminality and danger to [mainly] women).

Before you think I’ve gone nuts, the first reactive sex robots (as opposed to inanimate sex dolls) will be going on sale this year. The future is now.This will probably be worth coming back to in its own right and has been briefly explored in Humans and Westworld: is a realistic sex robot nothing more than a glorified sex toy? Can it consent? Does that matter?We’re still some way away from creating self-aware artificial intelligence, but the prospect of robots being able to respond in a human-like way raises serious questions. A sex bot can’t say no and isn’t a person so wouldn’t be subject to the same laws of consent or sexual impropriety as a human would. Likewise – and much darker – a sex bot created to have the appearance of an animal, child or young teenager would be, in legal terms, nothing more than a dildo.So it may be worth having pre-emptive laws that forbid sex bot manufacturers from selling products in Wales that: have the physical appearance of a child or animal, look like any real person living or dead, and fail to meet minimum hygiene/environmental health standards if used in an“e-brothel”.

Part V will look at sexual health in Wales and what can be done to support the NHS in addressing STDs, at-risk groups and teen mothers.