Like anything involving contact with bodily fluids, there’s always some measure of risk attached. This is going to be a pleasure to bring to you.

What is “safe sex” in the first place?Ultimately, it means reducing the risk of catching or exposing yourself to sexually-transmitted diseases (STDs) or an unplanned pregnancy. Most of it’s common sense and basic decency, but could include:

Some of the more common STDs include:

Herpes – Viral infection caused by variants of herpes simplex virus transmitted by contact with skin or bodily fluids carrying the virus. The outward symptoms are blisters and sores. There’s no cure as such, but the symptoms can be treated with anti-virals and topical creams.

Chlamydia – The most common STD. A bacterial infection that causes discharges from the genitals and pain during urination. It can be treated with antibiotics, but if left untreated complications can cause infertility in women and blindness (traucoma). It can also be passed from mother to child during childbirth.

Gonorrhoea – Aka. “The Clap”. Another bacterial infection that has symptoms similar to chlamydia and can also be passed from mother to child during childbirth. Although it can be treated with antibiotics, the disease is rapidly becoming resistant and may soon be untreatable.

Syphilis – Bacterial infection that causes ulcers, rashes and sores all around the body, as well as other symptoms like fever and joint pain that can last for several weeks. It can be treated with antibiotics, but if left untreated it can re-emerge decades after the original infection to cause serious deformities and attack the nervous system (neurosyphilis).

Hepatitis B & C – Viral infection that causes inflammation of the liver resulting in number of symptoms such as jaundice, tiredness and abdominal pain. It’s transmitted through contact with infected blood or bodily fluids. It’s usually not fatal but can develop into cirrhosis. There’s a vaccination available against Hep. B, but none for Hep. C.

Acquired Immunodeficiency Syndrome (AIDS) – The disease caused by the Human Immunodeficiency Virus (HIV). As the name suggests it reduces the effectiveness of the immune system, leaving sufferers more vulnerable to common infections and certain forms of cancer. Retro-viral treatments have improved to the extent that people with AIDS can live relatively normal lives (similar to diabetics), but there’s no cure and as HIV is present in the blood as well as sexual fluids it can be transmitted through shared needles, blood transfusions or from mother to child during pregnancy – not just sex.

The following is based on Public Health Wales’ quarterly sexual disease monitoring report from October 2016 (pdf). 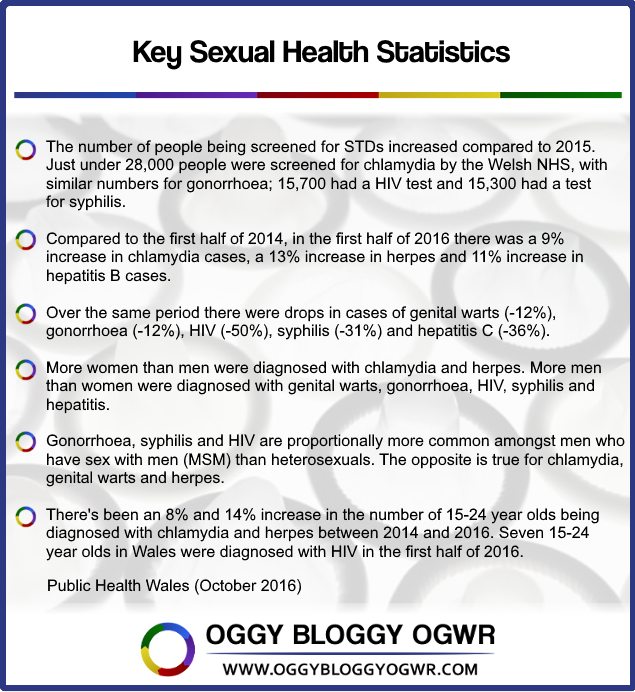 So overall, there’s probably more good news than bad with rate of STDs generally falling across the board.  However, the more worrying aspect is that the most common STD – chlamydia – is continuing to see year-on-year increases and, as mentioned earlier, it can cause serious problems if left untreated.

So another bit of good news is that more people are being screened overall, and there’ve been improvements in the Hywel Dda health board region (Carmarthenshire, Pembrokeshire, Ceredigion) in particular.

Maybe there’s still a level of ignorance in the population about risks from oral sex too – it’s far from “safe”. This suggests safe sex campaigns have been too focused on avoiding pregnancy and not enough has been done to target relevant information at LGBTs (and, indeed, straight couples) on forms of sex other than vaginal.

Generally though, although HIV/AIDS is probably the STD everyone’s most worried about, the number of cases each year are relatively small. The same goes for syphilis and hepatitis. This is a sign that the aggressively bleak public information campaign in the 1980s (Don’t Die of Ignorance) did the trick – and counts as one of Margaret Thatcher’s positive legacies.

The job of monitoring sexual infections is the responsibility of Public Health Wales, who publish quarterly reports on rates of STDs (as utilised earlier).

The first port of call for anyone who suspects they have an STD will probably be their GP or pharmacist as soon as symptoms develop.

After that, patients will probably be referred to one of NHS Wales’ integrated genito-urinary medicine (GUM) clinics, which provide STD testing, contraception and family planning advice, vaccinations as well as preventative services and emergency assistance such as emergency contraception or dealing with sexual assaults (Part II).

In many cases GUM clinics are nurse-led, but often have limited appointment-only opening hours with staff shared between multiple sites.

There’s an All-Wales Sexual Health Network and an All-Wales AIDS Network, both of which are now under Public Health Network Cymru. The goal is to share information and best practice between people working in sexual health – whether in the NHS or other organisations.

At time of writing this the Welsh Government’s five-year sexual health strategy was still under review, the previous one running between 2010-2015. As you might expect the overarching goal of the strategy is to – shock, horror – improve sexual health.

Third Sector bodies also play a vital role, in particular when it comes to AIDS patients and people who’ve contracted HIV. The stigma perhaps isn’t quite as bad as it was when HIV and AIDS first appeared, but it’s still there, and organisations like the Terrence Higgins Trust and Body Positive Cheshire & North Wales promote HIV testing and advocate on behalf of patients.

Most treatments will be standard medicines like antibiotics and creams, whether delivered through pharmacies or in hospital.

AIDS is perhaps the big exception. As mentioned earlier, retro-virals can be used effectively when treating AIDS, but there are also newly-emerging treatments which can reduce the chances of at-risk groups catching HIV (i.e. sexually-active gay and bisexual men, drug addicts).

These pre-exposure prophylaxis (PrEP) drugs can reduce the risk of contracting HIV by between 70-90% – but they’re pricey, often costing between £40-80 a month (£480-960 a year), and despite being trialled are currently not available on the NHS in Wales – though they were approved for the NHS in England in December 2016. The Liberal Democrats have argued they should be available and a three-year trial of PrEP in Wales was announced by the Welsh Government in April 2017.

Although not strictly STDs, there’s a routine screening programme for cervical cancer via Cervical Screening Wales. All women between the ages of 25 and 65 are invited for smear tests either every three or five years depending on age. There are tests for ovarian cancer as well, but it’s not done routinely. This means that although the disease is often relatively easy to treat when caught early, many women don’t get tested until the symptoms are obvious and by then it may be too late.

There have been concerns that women under the age of 25 find it hard to get smear tests following a raising of the age at which women are invited from 20 to 25 in 2013 (because cervical cancer is incredibly rare in the under-25s). Meanwhile, the Assembly’s Petitions Committee recently flagged up limited access to blood tests for ovarian cancer because of concerns over the test’s reliability.

Underage conceptions remain rare with only 248 recorded in Wales in 2014 (though three local authority figures remained confidential). 55.2% of Welsh underage conceptions were aborted – a much lower proportion than theEnglandandWales average of 62.5%. 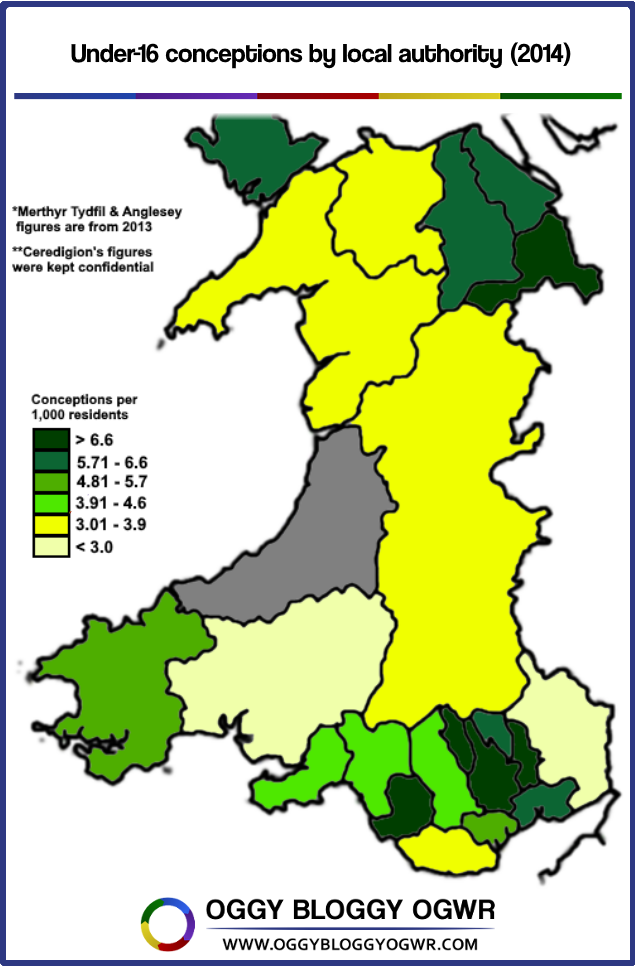 Top of the pile is Bridgend, at 7.5 underage conceptions per 1,000 people, closely followed by Caerphilly (7.2) and Torfaen (7.1). Teen mothers in Bridgend also kept more of their babies than anyone else with only 22.2% of conceptions resulting in abortion, compared to 55.9% in Neath Port Talbot, 78.9% in Rhondda Cynon Taf and 100% in Monmouthshire.

When it comes to conceptions amongst under-18s (so including 16, 17 and 18 year old mothers) the picture changes. 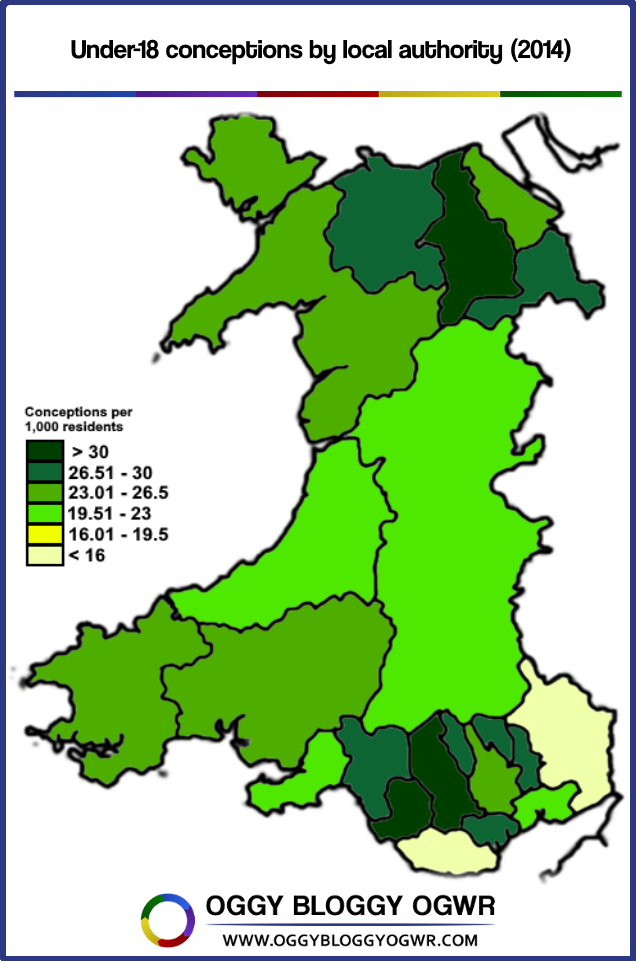 Being a parent at such a young age will obviously limit opportunities, and that explains the high abortion rate for under-16s. Pregnancy and childbirth makes staying in full-time education more difficult and, as a result, might lead to limited career opportunities or, it has to be said, a life of welfare dependency.

Nearly all matters relating to sexual and public health are devolved (abortion is the big exception), so independence isn’t required here. However, independence might lead to a break from the prevailing wisdom in the UK and encourage public health officials and governments to learn from examples around the world.As for what could be done differently: 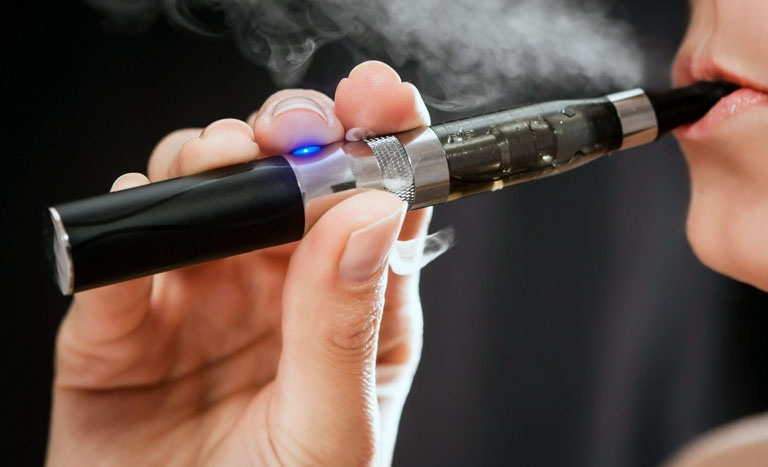