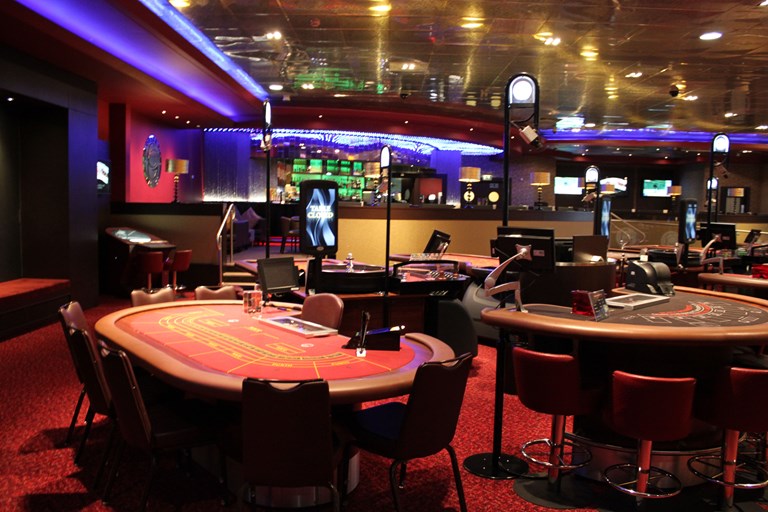 This final part of the Vice Nation series looks at something that when you get right can be fun and profitable, but when you get it wrong can leave you out in the gutter or, at best, in a Louis Theroux documentary.

Gambling has been discussed on this blog and in the Senedd before:

As you can see I’ve already covered The Lottery/lotteries. The focus of this post will be on betting, casinos, high street bookies, gambling’s socio-economic impact and regulation/legislation.

Gambling law in Great Britain is set out in the Gambling Act 2005. Betting/gambling/lotteries etc. are non-devolved to Scotland and Wales – with some exceptions regarding fixed-odds betting machines – but are generally devolved to Northern Ireland (with the exception of the National Lottery).

Although most types of gambling were legalised in 1960, prior to the Act – which came into force in 2007 – gambling laws were archaic, with the industry attracting an organised crime element. Attempts to crack down on that were successful, but following the introduction of the National Lottery in 1993, technological changes – such as online gambling and fixed-odds betting machines – mean the law needed to be updated.

The Act created the Gambling Commission, a Great Britain-wide statutory body tasked with regulating the gambling industry to make sure games were fair, that criminal elements were kept out of gambling and to prevent exploitation of children and vulnerable adults.

There are multiple gambling duties/taxes levied, including specific ones for bingo, machines, lotteries, betting and casino gaming. There’s too many to list here, but HMRC estimate the total raised across the UK in 2015-16 was £2.67billion (pdf – p52).

In a Gambling Commission report from October 2016 (pdf): 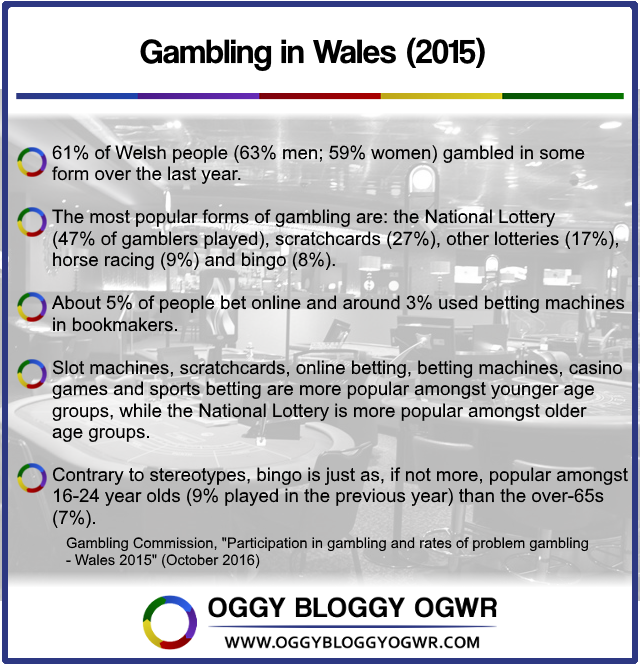 People considered to be at risk gamblers are more likely to use slot machines, casinos, fixed-odds machines and bet on dog racing. The opposite is true for the National Lottery, other lotteries and bingo.

In terms of the economic contribution, in 2013 it was said gambling supports 2,000 jobs and contributes at least £100million to the Welsh economy. In addition, according to disaggregated HMRC figures (pdf – p52), Wales raised £123million in gambling duties in 2015-16, which as a proportion of the UK-wide share (4.6%) is slightly below our population share (4.9%).

Powers over new licenses (as opposed to existing licenses) for fixed-odds betting machines with a maximum stake of £10 (B2) will be devolved to Wales in the Wales Act 2017. As usual when it comes to devolution this is a salami-slicing of relevant powers which render them near useless, as challenges by the Welsh Government or local authorities could lead to lengthy legal battles with betting companies.

Why Wales can have control over this very precise matter, but do nothing material over betting shops or gambling itself is just typical of how the UK works.

The Problems of Gambling

Gambling addiction – Gambling addiction (formally called gambling disorder) is a recognised psychological condition that includes behaviours over a 12 month period such as: gambling with increased amounts of money, making unsuccessful attempts to cut back, returning to gambling after losing a significant amount of money, relying on others to fund their habit. As mentioned earlier the number of problem gamblers is relatively small, but the introduction of no-limit stakes betting machines (where nobody can tell you “you’ve had enough”) is believed to make the problem worse.

Match-fixing – There’ve been a catalogue of incidents where sports matches have been rigged to favour one result, sometimes to the benefit of the players. No sport is immune: cricket, horse racing, football, tennis and boxing have all had high-profile incidents of match-fixing. The close relationship between betting and sport inevitable fuels it, though it’s mainly down to….

Organised crime and off-shore accounting – The Russian Mafia, Sicilian Mafia, Triads and Yakuza have all been implicated in illegal betting syndicates, and despite dramatic portrayals in the likes of The Godfather it is true to say the Cosa Nostra played a big role in the development of Las Vegas and Atlantic City as gambling havens. One of the few organised crime syndicates not to be implicated thus far is Carmarthenshire Council, so I don’t think we should expect a stallion to race against donkeys at Ffos Las any time soon.

Rigged games – Any game that operates outside of the laws of probability is probably rigged – like the Champions League draw. This is more a potential problem with online casino games than at a casino table itself. However, most bookmakers and casino operators don’t need to rig games due to the house edge – as long as they get the right volume of customers and bets, the odds will always be in the house’s favour because they’ll always take a certain percentage of each bet. So the answer is games are unlikely to be rigged, but are simultaneously always rigged. You only win when you’re “up” and know when to walk away – but people don’t work like that.

Concentration of bookmakers on the high street – High street bookmakers are to the 2010s what the card shop was to the 2000s. Rules which kept betting shops further apart from each other were radically altered in 2008 meaning they could open pretty much wherever they liked, with the idea being it would improve competition. It’s not a question of numbers – according to the Association of British Bookmakers the number of high street betting shops has halved since the 1980s – it’s about whether having rows of them encourages gamblers to go out of one shop and straight into another.

As mentioned earlier, some limited powers over gambling – in particular fixed-odds betting machines – are due to be devolved to Wales. Licensing powers are retained by Welsh local authorities, while the Welsh Government can assist in areas like financial education.

However, complete control over gambling – including the law, regulations, setting licence terms etc., as well as the National Lottery – would almost certainly require independence.

The do-minimum option would be to retain the current Gambling Commission as the regulatory authority in Wales. As it’s effectively self-financing there would be no impact. However, it’s reliant on Wales trying to keep the same gambling laws as we currently do, so it would hamstring the Senedd and Welsh Government’s ability to make changes.

The Commissioner would require start-up costs, but would presumably be sustained by licence fee income. Based on the annual accounts of the Older People’s Commissioner, you would expect a Gambling Commissioner to cost ~£1.9million a year, assuming there were up to 20 support staff.

I’m not in favour of banning betting on sport, banning betting machines or closing casinos and bookmakers – and I doubt many reading this are either. As far as I’m concerned people can do what they want with their own money, but there are measures an independent Wales could take to rein in the industry to protect the public whilst maintaining liberal licensing laws.