Before delving into the prospects for the parties and key contests etc. it’s worth looking at the current state of local government in Wales and what conclusions we can draw.

The Present Map of Local Government 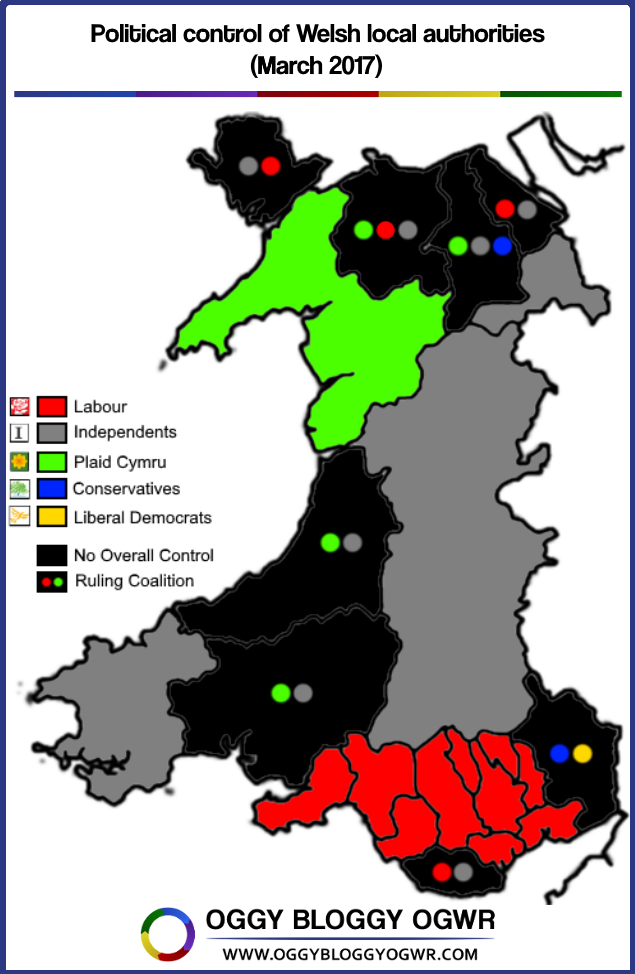 If you were to look objectively at the map you could draw a few conclusions:

Labour dominate (but don’t have it all their own way) – Labour dominate the south, do sod all in the bit between the A465 and A55, then have a scattering of influence across the northern coast. Even their most optimistic expectations were exceeded in 2012, but most of their growth came in places where the party were already strong: the south Wales valleys and north east.To hold on to their southern heartlands with such an iron grip is impressive, predictable and depressing in equal measure – aided no doubt by the electoral system. But the fact that a party with such political dominance can’t make headway in places like Powys, Pembrokeshire and Gwynedd does suggest the “Three Wales Model” is a psychological barrier to a truly national polity, hurting Labour as much as the other parties and Welsh politics as a whole.

Independents: The “Second Party” of Local Government – I’m not sure how things are elsewhere in the UK, but Independent candidates are a popular choice at local elections, to the extent they control three authorities and are part of ruling coalitions in a further seven. Some counties – like Pembrokeshire, Anglesey and Powys – have a long-standing tradition of voting for Independents, while others – like Wrexham and Vale of Glamorgan – end up with large independent blocks due to a failure of party politics at a local level leading either to defections or“hyper-local” parties and groups forming (like the Llantwit Major Independents and Porthcawl First).It seems to be a mainly rural phenomenon, and it wouldn’t surprise me if there’s a correlation between low population densities and voting for Independents. As for why Independents do better in local elections than national ones: perhaps smaller wards distant from centres of power lend themselves to voters backing “truly local candidates”; maybe there’s a belief amongst many people that party politics should stay out of local government; there’s a failure of party politics on the ground (lack of canvassing/intelligence gathering, lack of candidates, poor performance by dominant parties).

Plaid Cymru still struggle outside Y Fro Gymraeg – Try as they might Plaid still can’t shake off the “Party for Welsh-speakers” tag. Whenever they come close to doing so, there’ll be some incident to drag them firmly back into that box – the Llangennech school row being 2017’s. It’ll go down well in Ceredigion, Angelsey and Gwynedd, will probably win them control of Carmarthenshire and shore up the vote in Pontcanna. Will it win them any votes in Rhondda or Merthyr or Blaenau Gwent? Places they need to take from Labour? Of course not.It always seems Plaid are too keen to reinforce the vote they’ve already got instead of trying to break new ground and that looks like it’s going to be the strategy again this year. The electoral system doesn’t help them in the south, but they should be trying to put up as many candidates as possible to give people a choice and say “We are here”. It could even be a condition of membership that members put themselves forward for, at the very least, town and community council seats.Like him or loathe him, this is what Plaid need to learn from Neil McEvoy in spirit if not in practice: campaign on local issues not trendy “grandcauses”, don’t bang on about institutions nobody outside the Welsh-speaking middle class care about (i.e. S4C, Welsh language standards), don’t be afraid to call Labour out (but do it smartly). The only thing Neil isn’t doing is tying things – no matter how minor – to the national cause. Many of the powers to deal effectively with drug-related litter, for example, are likely to only come via independence.

Very little influence for the Conservatives and Lib Dems – The last local elections took place during the middle of the previous Coalition Westminster government and amidst the Lib Dem’s infamous u-turn on tuition fee caps. Both parties were going to get punished, but the Lib Dems came off worse, losing control (or joint control) of Swansea, Cardiff and Wrexham. That left them forming an unlikely ruling coalition with the Tories in Monmouthshire, where the Conservatives performed particularly poorly themselves – Tories losing Monmouthshire is like Labour losing control of Neath Port Talbot.You could even say both parties, despite having a reasonable number of councillors between them, are a near irrelevance in local politics. Again, victims of the electoral system to an extent.Will that change? That’s for another post. What’s becoming clear though is that this election will either seal the fate of the Lib Dems as a “dead on their feet party” in Wales, or start their revival. As I said after last year’s Assembly election, as long as they pick their targets carefully they’ll make progress – but the dream of them taking large numbers of seats in the likes of Bridgend, Ceredigion, RCT etc. are long over.

How have things changed since 2012?

I’m going to go into a more detailed look at the expectations each of the parties will have another time, but it’s still worth looking at how things are at the moment and how they’ve changed over the last five years.I should point out I’ve used total votes cast to calculate the vote share – that means counting every vote in every ward under the multiple member system (i.e. if Plaid put up three candidates in a ward, I count the combined vote received for all three). Personally, I think it’s more accurate.

At a more local level, another Labour “purge” in Neath Port Talbot has increased the number of sitting Independents from 5 to 13, while the recent untimely death of long-standing Brackla Labour councillor, David Sage, has left a (technical) vacancy in Bridgend.

Labour have net-lost around 30 council seats since 2012 (2013 once Anglesey is included) – mainly through defections and suspensions than by-election defeats. They’ve also lost positions in ruling coalitions in two local authorities – Carmarthenshire and Wrexham. As Labour were way out in front in 2012, losing some ground isn’t surprising and not bad news in itself. The real question is whether their current dire polling, or the creation of large number of spurned Independents through internal “purges” will “cause the dam to break”.

Independents have made gains since 2012/2013 – some 47 councillors and also seizing overall control of Wrexham. Most of those gains will have come through defections and suspensions, though I don’t remember any significant by-election victories for Independents.

Plaid Cymru have made modest progress – a net gain of 6 councillors since 2013, in addition to taking overall control of Gwynedd and forming a ruling coalition in Carmarthenshire. More positives than negatives, but they perhaps haven’t made the progress they would’ve liked in the Cardiff by-elections.

The Conservatives and Liberal Democrats are pretty much exactly where they were in 2012. Nothing more to add, really. That does, however, also mean they’ve managed to keep their respective numbers despite everything that’s been thrown at the Lib Dems in particular – which is probably a good sign for them all things considered as it displays loyalty.

UKIP and the Greens aren’t really doing much either. Technically UKIP has no councillors (they won seats in the Vale of Glamorgan and Merthyr Tydfil but have since lost them, their only councillor in Ceredigion sits as an Independent) and the Greens only one. The only other major talking point is the disintegration of Llais Gwynedd, having lost 6 councillors since 2012, including one of their leading figures in Louise Hughes.

Finances – The Welsh Government decide the combined budget for local authorities, and the budget for the Welsh Government is in turn decided by the UK Parliament. If Westminster cuts the budget to Wales then inevitably Cardiff will pass those on to county halls (though they have a choice whether to do so or not). Once inflation is taken into account all Welsh local authorities have seen their budgets cut every year for the last five years – amounting to hundreds of millions of pounds – and despite the relatively “good” settlement for 2017-18, the cuts are likely to continue for the foreseeable future.

Social Services & Social Care – Due to a population that’s living longer but not necessarily living healthier, there are a number of pressures facing social services departments across the UK, but particularly in Wales where the population is older and sicker than the UK average. A new law was passed by the National Assembly in 2014 which intends to provide more personally appropriate assessments of a person’s social care needs and greater protection for vulnerable children and adults. Trying to fully implement those measures rests of the shoulders of local councils, amidst growing budget pressures and long-standing issues over the cost of full-time residential care.

Schools – During the Fourth Assembly it was Labour policy to protect school budgets at 1% above any change to the Welsh block grant. That policy has since been abandoned and it means that at a local level, schools budget are now “fair game”. That doesn’t mean councils will automatically cut there, but with the budgets having been largely protected for the last five years, some councils – Bridgend included – will make cuts. In the long run that could mean teaching redundancies, bigger class sizes and more pressure to do more with less when it comes to the curriculum.

Regional Working & Pursuit of Reforms – One moment it looked like we would see the number of local authorities cut, but in a typical Welsh Government fudge, that’s been replaced with a new policy of closer regional working. It’s already done with schools (Regional Educational Consortia) and some aspects of health, but it could also be coming in for other areas. Will this cause confusion? Is it just delaying the inevitable (mergers)? Will some councils – like Conwy and Denbighshire – press ahead with mergers by themselves?