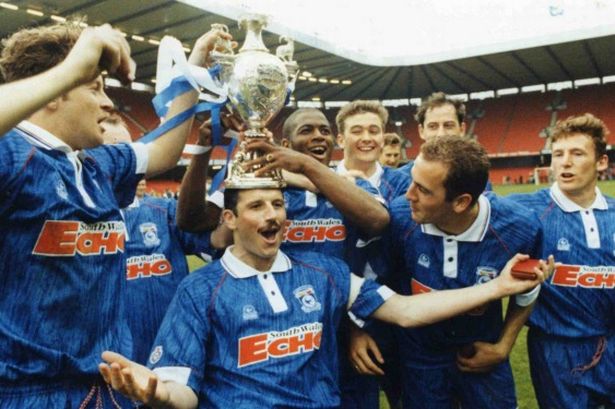 State of Wales has provided an opportunity to revisit, revamp and update the “Independence Minutiae” posts from Oggy Bloggy Ogwr. The goal of that series was to try and answer questions about independence that aren’t as urgent, but no less important.

The first re-write focuses on the most important thing of all: football.

TL;DR version: No. But if you want a more detailed look, strap in….

Why do Welsh football clubs play in the English pyramid?

When The Football League was established in the 19th Century it was done so with the aim of becoming a British league.

After Scotland and (pre-partition) Ireland went their own way, several Welsh clubs were left in what had become the English league by default. Nobody bats an eyelid, and even today the Welsh clubs are largely accepted as being in the English pyramid on merit.

The existence of Welsh national teams was threatened when a number of FIFA members grumbled that Wales had a place at the top table – like the rule-making IFAB – whilst not having a national league. As a result, the League of Wales (now called the Cymru Premier League) was established by the FAW in 1992.

Until the 1995-96 season, all Welsh clubs competed in the Welsh FA Cup, providing an avenue into European competitions for Welsh clubs playing in the English pyramid.

After “The Exiles” were blocked from competing in the Welsh FA Cup, the coefficients used by UEFA to calculate the number of Welsh sides entering UEFA competitions (and at what round) have slumped to embarrassing levels, while cup finals that used to get five-figure crowds are now lucky to get more than 1,500.

Although the standard of football in the Cymru Premier League has improved over the years (the bigger sides could hold their own in the National League Premier or Scottish Championship, while the days of double-figure thumpings in European qualifiers are almost over), the lack of money, lack of teams in major urban areas, low attendances, poor media coverage, competition with rugby union in the south and poor facilities mean the Welsh league’s public image massively underplays the popularity and strength of football in Wales.

Wales has one of the strongest national men’s teams in Europe at the moment, but one of the weakest domestic competitions. It’s a bit silly, isn’t it?

Do other countries have teams that play in foreign leagues?

Are Welsh clubs guaranteed to remain in the English pyramid post-independence?

The only way “The Exiles” would end up in the Welsh pyramid is if they voluntarily joined (as if that’s going to happen), or they were forced into doing so by being expelled from the English pyramid by the English FA.

Even when Merthyr Tydfil folded, the phoenix club that succeeded them (Merthyr Town) opted to stay in the English pyramid. At the time of posting they were three promotions away from English League Two.

FIFA also takes a very dim view of what they consider “political interference” in domestic football by governments. So a Welsh government can’t force clubs into the Welsh pyramid without the risk of Wales being suspended from international competitions.

Could there be an all-Wales competition in the future?

I should add that this already happens with the women’s teams. Cardiff, Swansea etc. field teams in the Welsh Women’s Premier League.

The FAW Premier Cup (which involved The Exiles and ran from 1997-2008) got a lot of media exposure but wasn’t a runaway success.

I’d be lying if I said I wouldn’t like to see all of the Welsh (men’s) clubs play in Wales. As an interesting thought experiment, would I (and others like me) have grown up supporting an English club if the old Bridgend Town were similar to Motherwell or Falkirk in the Scottish League and playing in front of 3-4,000 every week?

I know full well it’s neither practical nor desirable. It impossible to see the likes of Swansea and Cardiff turning down the £millions on offer in the Premier League or Championship in exchange for near-guaranteed European football every season.

One way to get an all-Wales competition would be for all Welsh clubs to compete in the Welsh FA Cup again – The Exiles joining at a later round – with a Europa League/Conference League place guaranteed to the winner. I don’t see that working, however, unless The Exiles either sacrificed competing in the English FA Cup and/or were disqualified from qualifying for UEFA competitions via the English league. It may also cause fixture problems.

Maybe if comparable sponsorship money, TV money and prize money were on offer in the Welsh Cup to that of the third/fourth rounds of the English FA Cup it might be enough to persuade The Exiles to take part – but it’s a big ask.