How the voting system works

European elections in the UK use the D’Hondt method. It’s the same method used to elect regional list members in the Senedd.

In short, all votes a party receives are divided by however many seats they’ve won plus one. Whichever party is ahead after this calculation wins a seat (which is added to their total number of seats won), with the process continuing until all seats in a region are filled (in Wales’ case four seats). Whichever candidate is placed first on the party’s list is elected first and so on.

In practice, this means each MEP elected in Wales needs to secure around 15% of the vote – though the threshold could be higher or lower depending on the distribution of the vote and how many parties stand.

While the vote in the UK is taking place on Thursday (23rd May), the results won’t be announced until Sunday (26th May) at the earliest. 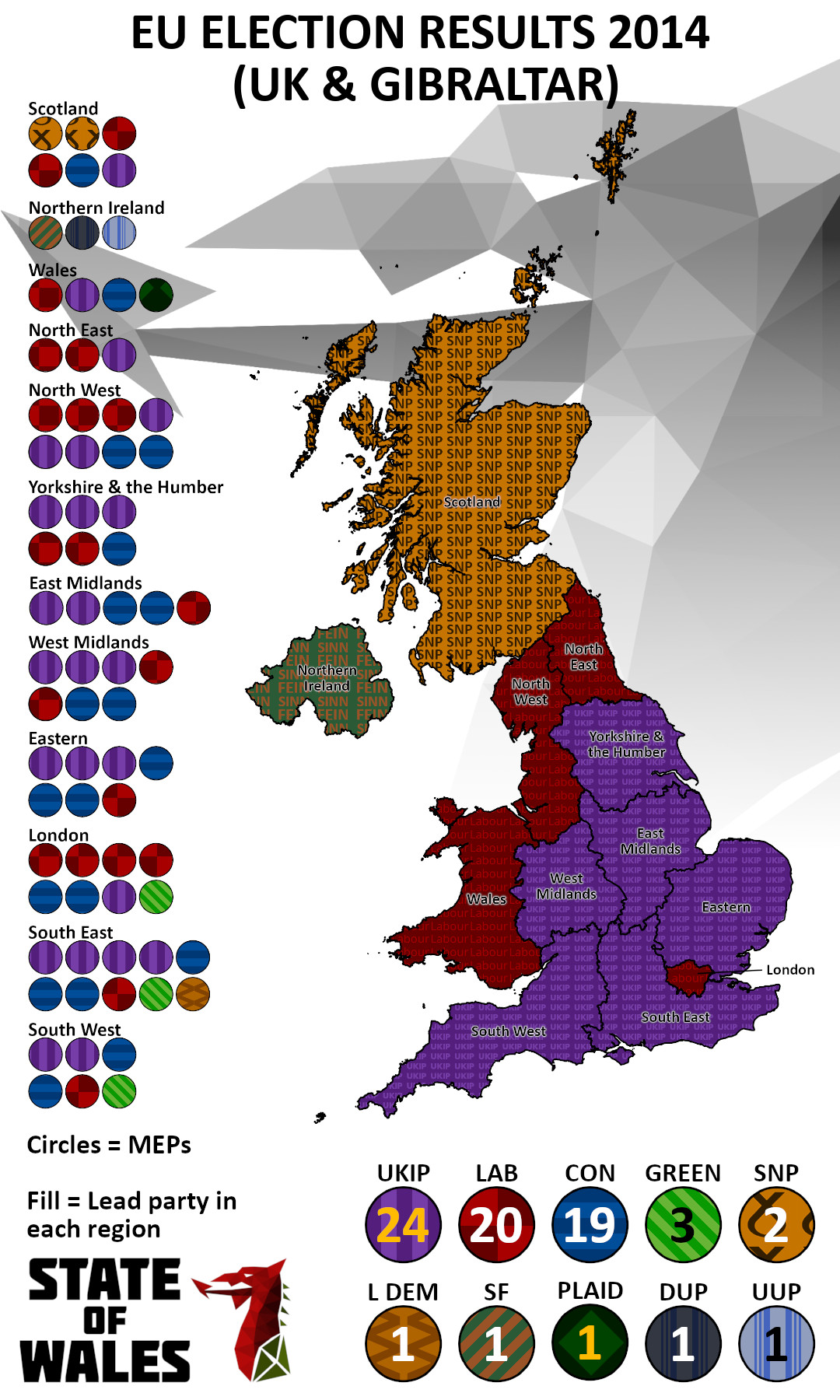 I get the sense that map will look very different next Monday.

The parties are listed in alphabetical order, with their European Parliament political group in brackets. Candidates are listed in the order by which they would be elected. Incumbent MEPs are in italics.

They’re guaranteed at least one seat. If they attract as many disgruntled Brexiteer Tories and Labour supporters as they’re expected to I can easily see them winning 35%+ of the vote in Wales, which would probably be enough for two seats. Nigel Farage. They should finish top across the UK as they’re the obvious choice for everyone who voted Leave in 2016 and the Tories haven’t put in any effort – meaning there’s no competition. Nathan Gill is thoroughly useless, but he’ll be going back to Brussels. And Nigel Farage.

At heart, Change UK doesn’t want anything to change. They’re largely competing on the same turf as the more established Lib Dems but have arrogantly come to the conclusion they’re somehow the vanguard of Remain; as I said the other day the feud between the two parties resembles two hipsters arguing over who liked something first. A strong performance could, ironically, lead to success for the Brexit Party (by dividing the Remain vote) and all signs are Change UK is going to be strangled at birth.

“Dead woman walking!” There’s been absolutely nothing from the Tories, who appear to be haemorrhaging support to the Brexit Party. I don’t think they’ll do quite as badly as the polls suggest but they’re in for a rough ride and we could well have a new Prime Minister by the end of the summer. Another period of chaos looms for Broken Britain.

I honestly don’t know why the Greens are standing in Wales and this is probably 2-5% of the vote that could’ve otherwise have gone to the lead G-EFA party (Plaid Cymru). There may be cause for optimism based on recent polling, which suggests the Greens could be heading for perhaps their best ever performance in a national-level election in Wales. However, history points towards this proving to be another expensive mistake for the Greens – both in terms of finances and the fracturing of the Remain vote.

Despite their confusing campaign message, you would expect Labour to be guaranteed at least one MEP in Wales due to their ingrained support – though indications are that support is going to fall to record low levels. Fingers will point towards Corbyn should Labour flop, but it’s not as if this has ever been a high priority election for the party as they keep their eyes firmly set on a possible early UK General Election.

The Lib Dems have never won a European Parliament seat in Wales and this election doesn’t look like being any different – despite a reported large jump in their polling figures. As I keep saying, all that will do is block Remain-supporting MEPs from being elected despite the Lib Dem’s staple dodgy bar graphs making an appearance on social media. It looks like they’ll do relatively well in metropolitan England having cited the rise in populism as an “attack on liberal values”. But tribalism will always trump common sense and the Lib Dems’ historical hostility towards Plaid will probably hand the Brexit Party a second seat.

Plaid seems to be taking this election relatively seriously and as long as people actually turn out to vote (particularly in their heartlands), Plaid should retain their seat – but they’re unlikely to do much better than that despite the ramping. They’ve put their ball very firmly in the “Remain/People’s Vote” court and will hope they’ll be seen as the party for Welsh Remainers to back – but as I keep saying, it’s a crowded field.

If you’re still considering voting UKIP after what they’ve been up to over the last few months, take a look at yourselves. The headline policies are standard copy-and-paste UKIP fare; scratch the surface though you’ll find something nastier. They’ll probably secure ~5% of the vote or such but will struggle to win seats as the Brexit Party usurps their position as the main party of Leave. Another nail in the coffin?