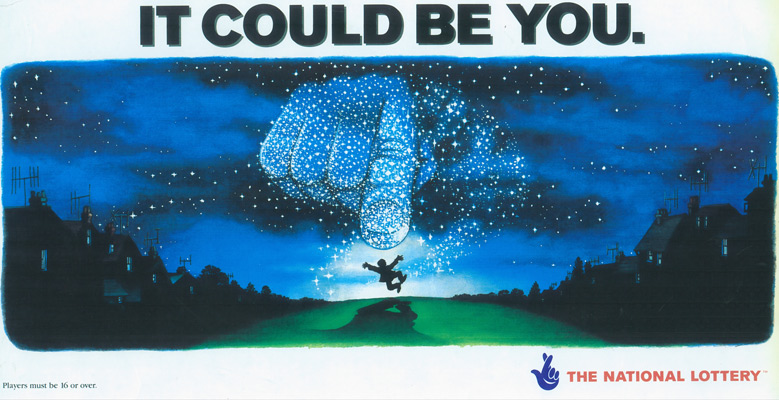 What is the National Lottery?

“Betting, gaming and lotteries” are reserved powers to Westminster in the Wales Act 2017, so could be considered another non-devolved matter Wales would take responsibility for only after independence.

Although general policy with regard gambling and betting is worthy of a more lengthy post at a later date (it took me 4 and a half years, but I eventually got round to it – Vice Nation: Gambling), the National Lottery is the single most significant feature within this category, so I’m looking at it separately.

The National Lottery was established by the Conservative UK Government in 1994. It was the first truly “national” lottery, as before 1994, only smaller, local, lotteries were permissible. Camelot Group were the private company awarded the National Lottery franchise, and have successfully retained that franchise ever since.

One of the more important features of the National Lottery is the Big Lottery Fund, which raises about £600million to distribute to “good causes” annually.

How does it work currently?

There are numerous games, which generally cost £1 per turn. Roughly 28p in every £1 spent goes to good causes. Around 45p goes to the prize fund itself, with the bulk of that going to the jackpot winner(s). Winnings are tax-free.

You have to be aged 16 or over to play the games, and you can be of any nationality to purchase a National Lottery ticket (though online games are restricted to UK bank account holders only). These rules also apply to syndicates.

You all know how the main feature draws work. You select a series of numbers, which are then chosen at random. Depending on the numbers/sequence of numbers you match, you win a varied cash prize. The main jackpot is usually worth several million pounds, “rolling over” to the following week if no-one wins. Prizes have to be claimed within 180 days of the draw, or the money goes to good causes.

Scratchcards have different rules depending on which one you buy, but usually involve matching symbols/numbers etc.

EuroMillions and the independence debate

The EuroMillions game, launched in 2004 by lottery operators in France, Spain and the UK, not only operates in nine different nation-states (UK, Rep. Ireland, France, Belgium, Luxembourg, Switzerland, Austria, Spain & Portugal) but in three different currencies (Pound sterling, Euro and Swiss Franc).The jackpot prizes tend to be huge, running into tens of millions of Euros.

The costs to play differ depending on currency. Due to exchange rates, it’s slightly more expensive to play in the UK (£2 per turn) than the Eurozone members (€2, which is currently around £1.60) but it’s roughly the same as the Swiss franc (CHF3 per turn = £2).

There’s also pan-national lotteries operating in the Nordic and Baltic countries (Viking Lotto) and the bulk of the rest of the EU nations, such as Germany, Italy, Finland, Netherlands (Eurojackpot). Lotteries, based on this evidence, operate quite flexibly across international borders.

So there’s no reason – in principle – why a pan-Great Britain/British Isle lottery couldn’t continue as currently.

The issues that would need to be sorted out would be:

As something of a left-libertarian, I’m in favour of liberalised laws/regulations in areas such as gambling, alcohol licencing, the sex industry and drug laws. All those things I’ll address in more detail at later dates, but it’s worth looking at how “Welsh” lotteries could work.

Alongside the National Lottery, you have to remember there are also smaller “national” ones like the People’s Postcode Lottery and the Health Lottery.

A Welsh lottery has subsequently been established. Loteri Cymru started in April 2017, with an umbrella company established to distribute grants and awards to charities. The jackpot prize is capped at £25,000.

Even if this eventually expanded to become a “Welsh National Lottery”, the prizes would likely remain much smaller. However, with prospectively fewer players, the chances of rollovers would increase and you might – statistically – have an improved chance of winning. Personally, I would prefer a smaller jackpot prize – perhaps capped at around £500,000 (or equivalent) – with a greater spread of winnings for matching fewer balls if there’s a rollover.

Also, any “good cause” money would be spent entirely in Wales. Though, once again, we’re likely to be talking small sums – single-figure millions – but every little helps. Lotteries are a fun way of raising an idiot tax small amounts for the national coffers too.

Perhaps the public can vote on, for arguments sake, 3-5 Welsh-based charities, that would receive an equal split of the “good cause” money raised by any Welsh National Lottery for the whole year. We would also be able to decide/regulate how and why that money is used – an issue raised by Syniadau.

Lotteries are (sometimes) a good way to raise funds for smaller projects too. Bridgend Ravens run a lottery for example. I don’t see any reason why this would change. Regulation, post-independence, should ensure lotteries are carried out fairly, but I wouldn’t like to see regulations overburden small organisations so much that it prevents them using lotteries to raise cash.

It’s likely to be the same. The bigger issue is whether you’ll be using Pounds Sterling, Euros, Coronau Cymreig or local currencies to purchase the tickets.

I wouldn’t be surprised if a “Welsh National Lottery” operated alongside the existing games (as Loteri Cymru or something else), similar to the Irish National Lottery. It might, with time, gradually overtake the pan-British lottery as the “main”/”feature” lottery in Wales.