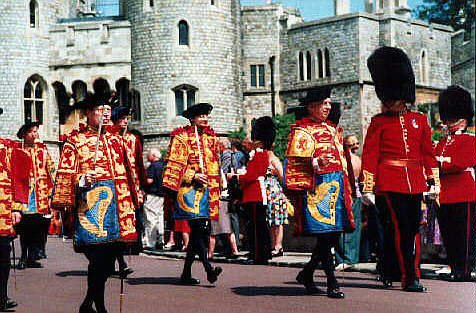 It includes the official record of flags, coats of arms (including those used by corporations, local government and towns), genealogical arms, as well as the process of creating new arms. It stems from the medieval practice of knights using a unique collection of symbols to identify themselves in an age when most people were illiterate. As you can imagine this would be useful on the battlefield.

Over centuries, heraldry has moved from being a practical necessity amongst warrior castes to being more a status symbol. Despite this, arms of governments and officialdom (including the monarchy and presidents) still carry significant weight, and most documents aren’t official unless they’ve been marked with a state seal – which usually includes a coat of arms of some sort.

The modern organisation of heraldry goes back to the 15th century with the creation of the College of Arms in England. The College of Arms is made up of (arguably) the silliest of the “silly hat a coat class” (Independence Minutiae: The Aristocracy), and has thirteen officers of arms, including : three Kings of Arms, six Heralds of Arms and four Persuivants of Arms, all overseen by the hereditary position of Earl Marshal.

Scotland’s Future (pdf) makes no mention of heraldry. Scotland has a separate heraldic tradition, embodied within the Heraldry Society of Scotland and the position of Lord Lyon King of Arms.

Prior to annexation, Wales had its own heraldic tradition, though it’s since been absorbed into the English system. A junior position within the College of Arms is reserved for Wales – the Rouge Dragon Persuivant of Arms in Ordinary (yes, that’s the real name).

The College of Arms is considered part of the Royal Household, and officers of arms play a very prominent ceremonial role in the State Opening of Parliament and other ceremonial events such as the Order of the Garter service, coronations and state funerals.

Professionally, as said, the College of Arms is responsible for maintaining genealogical records on pedigree (to deal with succession to hereditary peerages), recording and maintaining coats of arms, as well as issuing new coats of arms. It’s predominantly self-financing through fees (ranging from £5,500 for personal arms to £17,353 for a commercial company), though officers of arms are paid a nominal annual salary of just £50.

Heraldry is seen as part of a nation’s heritage and in some cases a hobby, so it would continue post-independence in some form, regardless of whether Wales retains the monarchy (with or without retaining other titles of nobility) or becomes a republic.

Many Commonwealth Realms, in particular Canada, have a state official with a responsibility similar to that of the College of Arms. In the Republic of Ireland, there’s a Chief Herald position within the Irish Government – a successor to the Ulster King of Arms.

You would presume a Welsh Government post-independence (in a republic) would establish some sort of register and official, a Chief Herald of Wales, to carry out heraldic functions within the civil service.

If Wales retained the monarchy, you would expect our Rouge Dragon Persuivant of Arms in Ordinary would be “upgraded” to a King of Arms for Wales,and the College of Arms would retain heraldic functions in the same way it does for some Commonwealth Realms like Australia and New Zealand.

In both cases it would be self-financing (as currently). Although with the civil service option, the Chief Herald would presumably be paid a full or part-time salary as any other government employee. So keeping the College of Arms would actually work out cheaper.

This might not seem important, but in January 2015 a row brewed over flags being lowered on National Assembly and Welsh Government estates to mark the death of King Abdullah of Saudi Arabia – an absolute monarch who had an appalling human rights record, but whom the UK had close ties with.

An FOI request to the Welsh Government (pdf) revealed that the UK Government (Department of Culture, Media & Sport to be specific) requested that all flags be lowered to half-mast from 8am to 8pm on 23rd January. The First Minister’s office were asked whether to proceed; their response being “Yes please”.

The Welsh Government have their own internal guidance on lowering flags to half-mast (included with the FOI request above). It’s mainly restricted to official periods of mourning (such as the death of a senior royal, serving and former Prime Ministers and serving or former First Ministers). Other occasions are determined in consultation with DCMS.

So one issue would be whether the criteria for flags being flown at half-mast should be determined by a Chief Herald, the head of state (monarch or president) or the head of government. Usual international practice is for the head of state to have the power, but not lowering flags at the right time could be interpreted as a diplomatic slight.

Should Wales have an official flag?

What would be one of the more noticeable things in a hypothetical post-independence Wales is that the union flag would no longer be flown outside public buildings, and things like military commemorations would look very different.

National flags are usually included in a nation’s written constitution (Welshness in a Welsh Constitution), though the exact details (for international standards) might be set out in an executive order or regulations.

You would presume Y Ddraig Goch would be retained as the national flag as it’s synonymous with Wales already and highly-distinctive.

The St David’s Cross could be an alternative. The Christian Party infamously proposechanging the national flag to the latter because the dragon is “a sign of Satan” (though the guy behind it has since moved to UKIP).

There was also an petition to the National Assembly in 2012 (pdf – p22) which called for the flag to be changed to the cross as it’s a symbol of ancient Britons and a mythical red dragon was defeated by (English patron saint) St George. The petition was deemed inadmissible because flag policy is non-devolved.

If Wales retains the monarchy post-independence, there’s a question on whether there would need to be an official Royal Standard of Wales (in the same way Scotland and Commonwealth Realms have different royal standards). This would presumably be the current Prince of Wales Standard.

If Wales became a republic, a president would need some sort of seal or symbol too, though it would be far more “secular” – even the National Assembly has its own flag. Then there are symbols/seals for the military, police etc.