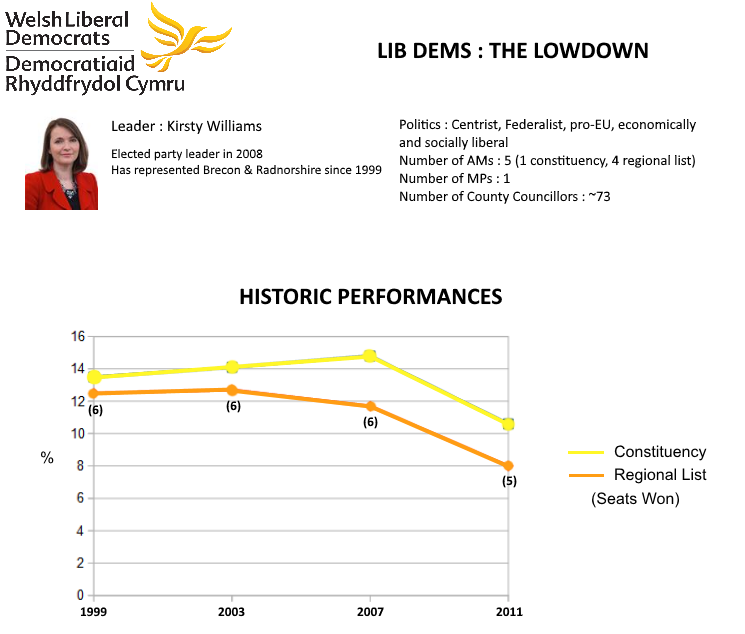 This isn’t the first time the Welsh Lib Dems have been under electoral pressure. Following the anger directed at Nick Clegg after the party reneged on their promise not to lift the cap on tuition fees, it was said the Welsh Lib Dems were due for a pasting in the 2011 National Assembly election. Instead, Plaid Cymru took the brunt and the Lib Dems lost only a single seat – though they retained others by the skin of their teeth.

That wasn’t without embarrassment, with two of their newly-elected AMs being disqualified for failing to resign from public organisations before standing, resulting in their first choice for South Wales Central, John Dixon, being  unceremoniously ejected from the Assembly.

It’s fair to say the Lib Dem Assembly group have ridden out the storm caused by their time in government at Westminster exceptionally well. They’re a tight-knit group (though that’s not difficult with just 5 members), who arguably make the best opposition contributions to Assembly debates and – despite being pragmatic in their approach to dealing with the Welsh Government – stood their ground on more than one occasion and drew major concessions.

This led to two pieces of legislation – on the licensing and administration of mobile homes and nursing levels on hospital wards – being passed. Also, one of their key election pledges in 2011- a ring-fenced grant to be awarded to schools in order to to aid the education of deprived pupils – was introduced as part of budget deals with Labour that run into the hundreds of millions of pounds.

Nevertheless, despite the often exemplary performance of the party in the Assembly, the backlash against the Lib Dems in May 2015 threatened to knock the stuffing out of them.

Over their period in government at UK level, the party were embarrassed by a series of high-profile scandals, with a senior resignation early on in the parliament and paragon of intellectual liberalism, Vince Cable, overseeing an undervalued privatisation of the Royal Mail – having had a pretty underwhelming period as Business Secretary generally. The final insult to injury was Danny Alexander’s yellow box.

Being a federated party, the Welsh Lib Dems and their partners in Westminster often seemed like two completely different parties, but the mud stuck, and they were left humiliated despite fighting off Plaid Cymru in Ceredigion in what quickly became a very dirty election.

With the party decimated they elected….some guy….as leader at UK level meaning, arguably, Kirsty Williams isn’t only the most effective leader in the Assembly, but now the most high-profile and gifted Lib Dems in the whole of Great Britain. It wouldn’t surprise me if senior party figures will be following her progress in Wales very closely and preliminary moves to swap Cardiff for Westminster are made behind the scenes.

Pound-for-pound, they’re the most capable group of AMs – The talent and abilities on the Lib Dem benches have always been impressive. Even their weaker members can out-AM some of the best AMs from the other parties. They always do their homework, make good contributions to Senedd debates and committee sessions and treat the institution with respect. The down side to that is the only people who really notice are those who follow the Assembly closely; every political anorak in Wales will probably rank at least one or two Lib Dem AMs amongst their favourites, but they’re still relatively anonymous to the public.

They produce some genuinely good, well thought through, policies – Everything is done in the open (link), they also have a talent for seeing problems and coming up with well-though through, practical solutions. There’s rarely any “pie in the sky” stuff from them as they’re perhaps not as wedded to ideology as the other parties so can concentrate on workable details. They usually win the argument too.

They’ve delivered some of their policies this term – This is their trump card. Although they never went into formal coalition with Labour, they can at least go to voters and say, “We got this out of Labour” or “We did this”. The jewel in the crown will be the £100million+ Pupil Deprivation Grant, and after the debacle of the tuition fee betrayal, they can point to that as a way of making amends. Also, they can point to the two laws they’ve seen through this term, but the Nurse Staffing Levels Act 2016 in particular could go down well with the public.

The Westminster hangover – In May 2015, the Lib Dems woke up after one of the roughest nights in modern UK political history. Imagine going to bed after a great party in 2010 thinking you were going to change the world for a better, only to wake up five years later with David Cameron snoring next to you and George Osborne pulling the covers over for a Dutch oven. The public are often fickle when it comes to politics, but it’s still all a bit too soon.

A hemorrhaging of support – The only poll that counts is the one on May 5th, but everything’s looking grim. The Lib Dems are now by far and away the smallest of the four main parties currently represented in the Senedd for obvious reasons. UKIP have certainly overtaken them and the Greens aren’t far off on the regional lists. They’ve bounced back a little since then, but outside of traditionally-strong Lib Dem areas there’s little sign of it on the ground.

Hard to take seriously anymore– How many times over the last five years have we heard those immortal words, “Only the Liberal Democrats can/will….” accompanied by a dodgy bar graph. When parties say that “only they” have the solutions to every problem the public usually tell them in big numbers that they don’t. It’s a similar problem to Plaid Cymru (and, to a lesser extent, the Greens and Labour) in that the Lib Dems are excessively prideful and righteous, so it’s always slightly amusing when they inevitably fall flat on their face; though unlike Plaid they do at least have something significant (policy-wise) to show for it all this term. 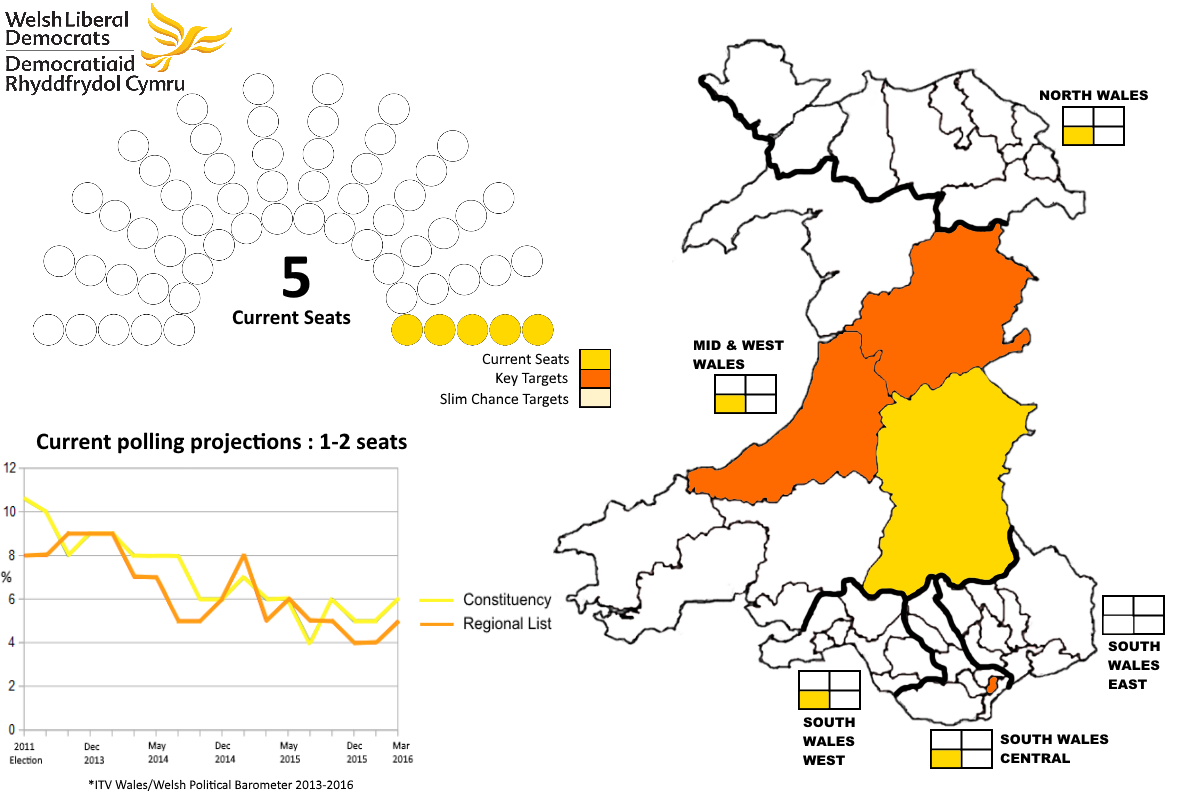 As suggested, this is an incredibly high-stakes election for the Welsh Lib Dems, perhaps the most important one they’ve faced since devolution. They’re fighting for their political lives, maybe even the very future of their party in the short to medium-term.

While it’s quite clear the Lib Dems are going to take a bit of a kicking on May 5th, the good news is that it appears the rot has stopped, things have stabilised and they’re starting to make a very modest comeback, with slight gains in the latest poll.

Cardiff Central is their only realistic target. As negative as it sounds, they’re unlikely to win any extra seats, though they’ll probably be competitive in Ceredigion and the two Powys seats as usual. Even Kirsty Williams’ seat in Brecon and Radnor is likely to come under attack (from the Tories) but I’d expect her to hang on due to a strong personal vote.

The list seats are set to be a wipe-out, with the Greens snapping at their heels and UKIP certain to overtake them in the polls. With only four seats per region, and with the Lib Dems occupying the last spot in a lot of them, it’s not looking good. However, the same thing was said in 2011 and the Lib Dems still managed to hang on.

Based on their vote strength across Mid & West Wales constituencies, you would expect their best chances of holding a list seat to be there.

At a minimum you would expect Lib Dems to hope they can retain enough seats to keep a workable coalition with Labour on the table and get Kirsty Williams into cabinet.

Due to changes brought in by the Assembly’s Remuneration Board, AFAIK parties no longer need a minimum of 3 seats to remain a recognised party group, but psychologically-speaking it’s an important figure. If they can somehow retain all 5 seats, or keep losses to one or two, they ought to be absolutely delighted.

Losing any of the current Lib Dem AMs will harm the Assembly, and we’ll end up regretting it when you look at the Kippers who are on course to replace them.

Having said that I have a very long, often reliable, memory (you have to when you do this) and distinctly remember certain Swansea-based AMs were once fond of saying other parties were “drifting into political irrelevance”. I don’t believe in karma, but….

There’s no floor here, so anything less than 3 seats, up to and including a complete wipe-out – which is an outside possibility, but not the racing certainty it once was now they’re out of government in London.

Winning only 1 or 2 seats (perhaps taking Cardiff Central) would still be a bad night, but enough to save face and would ensure the Lib Dems retain some relevance in the Fifth Assembly.

A wipe-out would be an absolute disaster and crippling blow to the long-term future of the Welsh Lib Dems. The saving grace is the situation wouldn’t get any worse and they can properly rebuild themselves from the ground up for the local elections in 2017 – though there might not be enough time.

So in a backhanded way a wipe-out might be a good thing as it would force a period of introspection and serious analysis of where they’re going wrong (similar to Plaid in 2011-2012). If I were a Lib Dem, I would be concerned that retaining 3 or 4 seats would paper over the cracks and give them the mistaken impression that things aren’t going as bad for them as they seem. Sometimes you have to hit rock bottom before recovering.