After what seemed like decades of torture, the electorate has delivered our verdict on whether the UK should stay in the EU, with EnglandandWalescomprehensively saying : “Out.” 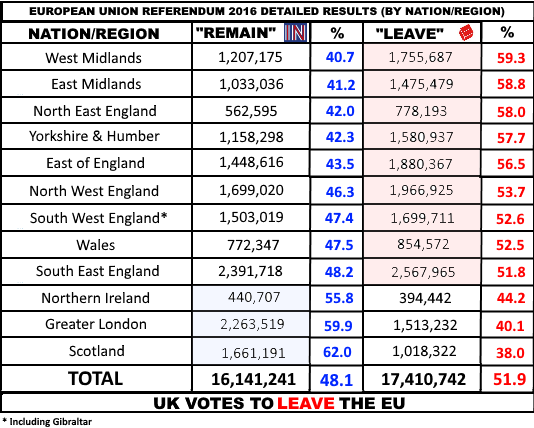 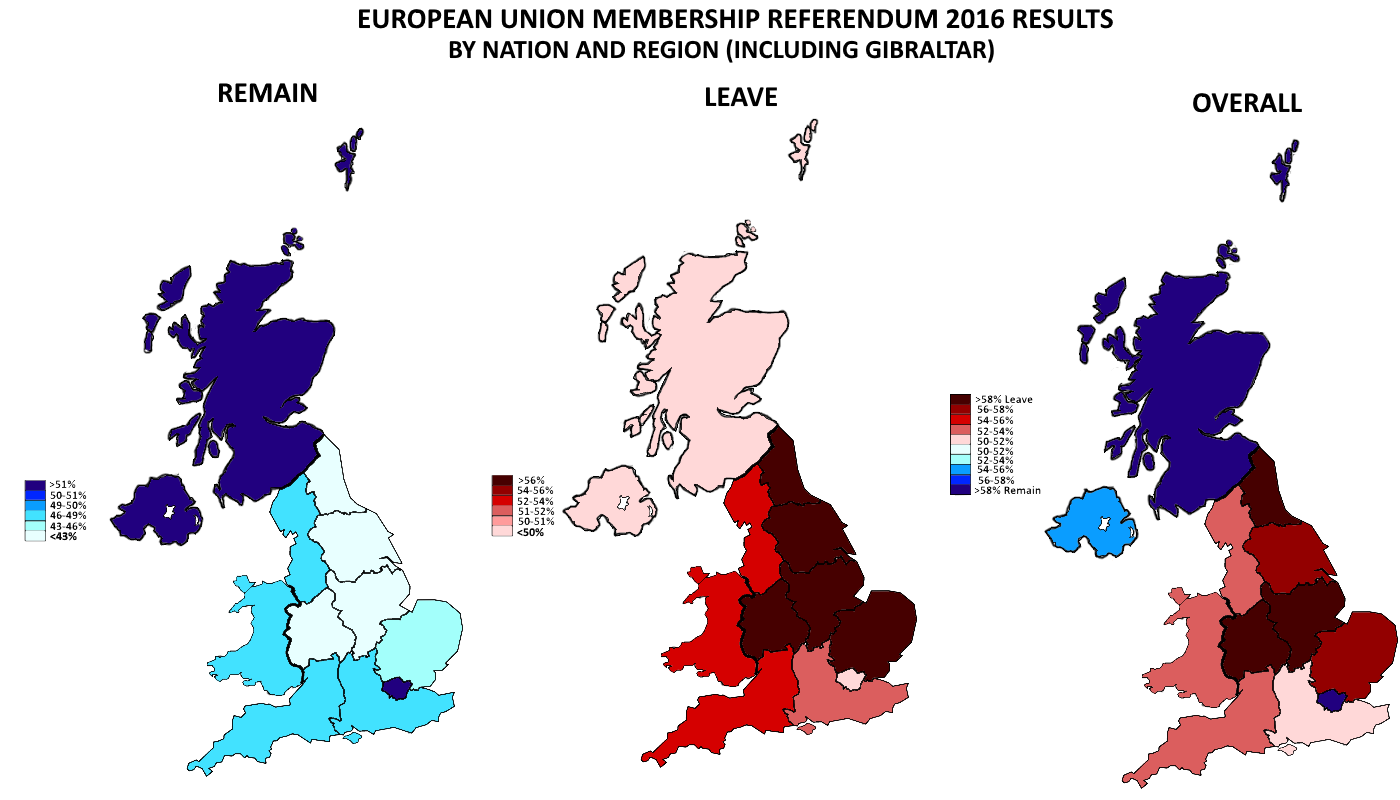 The obvious thing to note here is the fracturing of the UK into a London city state, a European Scotland, Northern Ireland and a eurosceptic rump EnglandandWales.

I said on Wednesday the result would be close and although I called the result wrong, the general picture was right – the Welsh result was decided along the M4 in favour of Leave; the regions and nations you would’ve expected to vote Remain did so.

Again, I think everyone expected it to be close, the areas you would’ve expected to vote Leave or Remain did so. The Welsh result broadly fell in line with England, with Labour heartlands in particular producing strong Leave votes – the Bridgend and RCT results will be embarrassing to Carwyn Jones and Leanne Wood respectively.

The surprise results were Monmouthshire voting to Remain and both Neath Port Talbot and Swansea voting Leave. The vote seems to have split along education and class lines; Wales’s wealthier and/or better-educated areas (alnog with those more naturally Welsh nationalist) – which are few and far between – voted Remain. More deprived areas voted Leave.

Whether the steel crisis played a part in the NPT result remains to be seen, but the result could well have massive implications for Tata’s sale process, especially as they’ll soon have a more productive and cost-effective plant within the EU and Port Talbot etc. outside it.

Why did Leave win?

Immigration, immigration, immigration. Economic arguments aren’t going to cut it with people who don’t have much to lose in the first place: the white working class and the already retired (particularly those on final salary pensions). The sovereignty argument was for constitutional obsessives and this was ultimately won by Labour voters.

Immigrants are an easy scapegoat: they’re faceless and the logical argument to vote against immigration is easy to understand (too many people + too generous welfare = too few jobs, too few houses, long queues, people speaking foreign). The main parties have tiptoed around the issue and completely failed to address it properly without smearing people as racists or xenophobes. This is the reaping of a crop sewn under New Labour by politicians who have no idea how the other half live.

It’s no surprise that the one indicator that correlates with high Leave vote (other than age) is a poor education – areas with high numbers of people with degree-level qualifications generally voted Remain across the UK (with the exception of Scotland and Northern Ireland where the issues are more complicated).

Leave voters have been left behind by de-industrialisation, ignored, belittled or are direct victims of globalisation and free movement. Add to this the anti-politics messages of UKIP and it’s no surprise they fought back.

Why did Remain lose?

In short: too smug, too slow, too London.

Too many people in the Remain camp (SNP aside) thought the Project Fear campaign won them the Scottish independence referendum and thought lightning would strike twice. No, it didn’t. They won in spite of it in 2014. The browbeating in a climate of what’s being dubbed “post-truth politics”was never going to fly, particularly with voters who don’t usually matter in UK general elections. This time they did matter.

In Wales, the most active campaigning from either side wasn’t from the official campaigns but from the pro-Leave right-wing English press : Daily Mail, Express, The Sun; the most popular and widely-read newspapers in Wales. That’s probably the big difference between Wales, Scotland, N. Ireland and London – the fact there was no Welsh message. I received my first and only campaign literature on Wednesday.

It was supremely arrogant of David Cameron to call the referendum so soon after the devolved and English local elections. I initially thought eight weeks would’ve been enough time to get some sort of campaign off the ground but it clearly wasn’t and it should’ve been delayed until at least early autumn.

It’s clear the close timing caused huge, huge problems for party machinery at a Welsh level. I know some AMs attempted a proto-campaign but didn’t have the resources or manpower available to press on. So while it might seem fair (even right to a certain extent) to criticise the Welsh parties and politicians for not being engaged with the campaign, it’s not entirely their fault.

The Political and Economic Fallout

This has been the most spiteful, negative, poorly-run campaign I’ve experienced since I’ve been old enough to vote. It’s at least as bad as the AV referendum in 2011 but made worse because of the high levels of publicity this one’s got and the seriousness of the vote’s impact.

From the Remain side we mainly got scare stories, while all we got from Leave was jingoism and tin foil hat conspiracy theories. It’s been a shambles and the political repercussions could stretch beyond the result of the vote itself. I wouldn’t be surprised if many people’s – particularly young people’s – trust in politics, politicians and the democratic process has been terminally damaged.

This referendum has cracked open a rift that, until now, had only existed within the Conservative party but has spread to the entire population (except Scotland). Although I personally accept the vote, that doesn’t mean I’m not angry, mainly because I’m not convinced voters were given the right information to make an informed choice either way.

My other big worry, in the longer-term, is when immigrant numbers are down to “more manageable” levels and it doesn’t solve all the world’s ills, another scapegoat will need to be found and it’ll be the poor and areas not pulling their economic weight in this brave new microcosm – like “the sponging Taffs”. In my opinion the real source of problems in the UK isn’t immigration but the cost and supply of housing.

The biggest ramification is, obviously, David Cameron’s announcement this morning that he’ll stand down as Prime Minister by October. There’s a real prospect that one of the prominent Vote Leave Tory MPs – Michael Gove, Boris Johnson, Andrea Leadsom – will be UK Prime Minister by the end of the year. It’ll probably have to be a Brexiteer to have any credibility in exit negotiations.

Economically, we’re already seeing the impact on the financial and currency markets – something written off as a scare story has come true and it won’t end there. Market volatility isn’t unusual though and it perhaps looks worse than it is, with things stabilising at a lower level after the Governor of the Bank of England’s statement earlier.

If the negotiators don’t get this right, this is a potentially disastrous decision for the Welsh economy in the short term. Wales exports more to the EU than we import and, as mentioned, we were a net beneficiary of EU funding. That won’t change in the short term, but the UK will likely leave the EU before the current round of structural funds ends (in 2020).

In terms of Welsh politics, Wales four MEPs are effectively working down their notice and will be lame ducks in Brussels – though you would expect Nathan Gill AM (UKIP, North Wales) to remain in Cardiff Bay full time after the result (Edit: he lasted a couple of months).

The National Assembly is due to debate the result next week – I’ll cover that debate, obviously. The First Minister has already called for funding for Wales to be protected, while the Prime Minister said the devolved administrations would be involved in Brexit negotiations – what that means in practice remains to be seen.

Scotland’s gone. It’s a matter of when rather than if. There will be serious, serious problems if the incoming Prime Minister denies Scotland a second independence referendum – should Nicola Sturgeon pursue that. It may even push Scotland towards either an unofficial/illegal plebiscite or even a unilateral declaration of independence.

Gibraltar’s another one. They could attempt independence themselves and become one of the European microstates like Liechtenstein or Andorra. With the Greenland and Crown Dependency precedent of constituent nations and territories having different relations with the EU to the “parent state”, there’s the outside possibility Gibraltar could become some sort of EU protectorate under UK rule.

Next, Northern Ireland – the only part of the UK which will share a border with an EU member state. The prospects there are not good. I don’t think there’ll be a “Border Poll”/referendum on a United Ireland, but something special will need to be arranged to prevent dissident republicans and loyalists destabilising the peace process. A bit of good news is the UK and Republic of Ireland have open borders via the Common Travel Area agreement, which is outside the EU. There’s no reason in my mind why that shouldn’t continue.

The good news is this referendum proves people will vote for something based on things other than economic arguments if you offer them something different. As economics is the big stumbling block to Welsh independence, it suggests people can (but not necessarily would) be turned into thinking Wales isn’t “too poor“ to be independent. All the arguments the Leave campaign used apply to Wales too and, outside the EU, the vision for an independent Wales can be much broader. We really can be a “mini Switzerland”. Plus, if the economy takes a hit, it might become easier to argue for an independent Wales rejoining the EU.

The bad news is that, unlike the Scots, we can’t argue there’s any sort of mandate for Wales to be a special case in Brexit negotiations. Wales voted out in line with England and, as a result, we’ll be sidelined and hold absolutely no leverage. I’d expect the First Minister and Senedd to disagree, but that’s reality. The only crumb of comfort there is the Welsh result for Leave wasn’t as strong as England (excluding London). If the economy takes a big hit – as expected – then we’re going to be a slowly rotting appendage on Merrie England. If it came down to a choice between the two unions, I’d expect the Welsh to fall in line behind the Union flag.

We’re stuck with England and we’re going down with the ship.