This is a re-write of an older post looking at the minor implications of independence – this time policy on public holidays, fittingly posted on St David’s Day.

If you didn’t already know, public holidays – as opposed to statutory paid annual leave – are state-mandated paid holidays which usually all but essential public workers take off.

How public holidays work in the UK 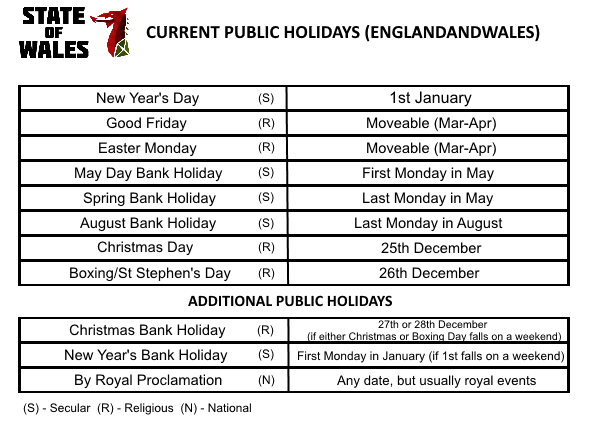 EnglandandWales have the same number of public holidays – 8, with occasional ones in lieu of a public holiday if the date falls on a weekend.

Northern Ireland has 10 official public holidays – the ones in EnglandandWales, plus St Patrick’s Day (17th March) and the anniversary of the Battle of the Boyne (12th July).

There’ve long been calls for St David’s Day (1st March) to be a public holiday in Wales – going back to before devolution – and the National Assembly voted unanimously to make St David’s Day a national holiday in 2000.

However, while the Conservative-Lib Dem Coalition Government discussed the proposal (which would’ve involved moving one of the May bank holidays to March 1st), they ditched it.

The power to create public holidays in Wales was retained as a UK reserve power in the Wales Act 2017 (Schedule 1, Part 2, Section N4 if you want me to be specific), meaning the Senedd doesn’t have the power to make any changes to the law even if they wanted to.

Additional public holidays can be created by Royal Proclamation – for example, to mark a major Royal event such as a Jubilee or a wedding of a senior member of the Mountbatten-Windsor family. State funerals for the monarch are normally a public holiday too.

What does the rest of Europe do? 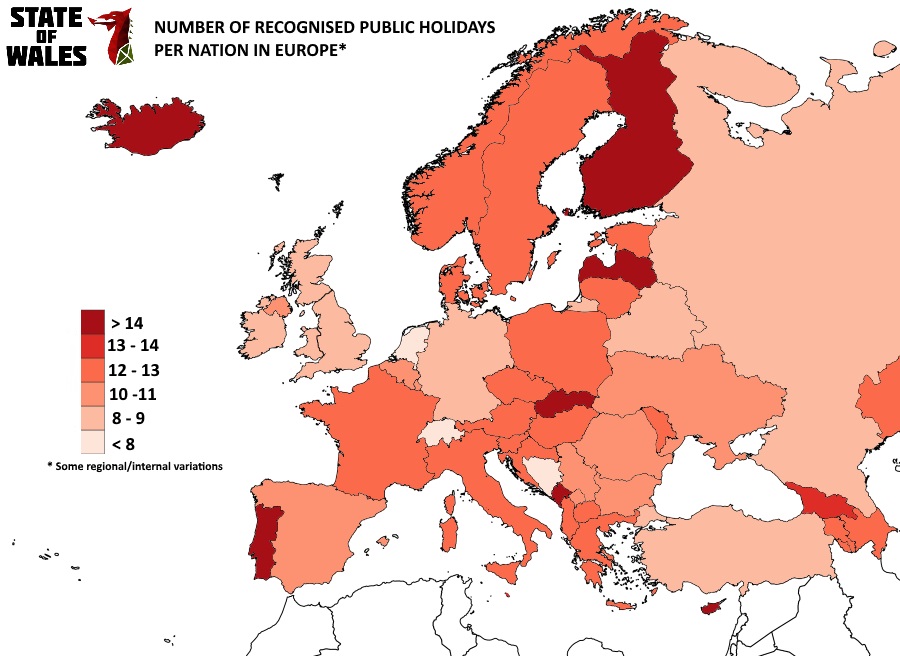 There’s no EU policy on public holidays; it’s at the discretion of member states, though in those member states which have a federal or quasi-federal constitution – including Germany, Switzerland and Spain – public holidays are decided at a state/sub-national level.

The latter means that while there are a small number of national-level public holidays in Switzerland, for example, when you include holidays in each canton the number increases to 10-12; the same goes for the autonomous regions/nations of Spain and German federal states (for example, Bavaria has 13 public holidays while Schleswig-Holstein has 10).

Some nations, like Greece and Finland, have mandated that every Sunday should be a public holiday.

So, in principle, to align with practice around the rest of Europe an independent Wales could add another 3 or 4 public holidays, as our current 8 is below average – though that would come at a cost.

How much do public holidays cost?

Whenever the issue of new public holidays comes up, you can guarantee there’ll be a talking head from one of the big business organisations, like the CBI, plonked in front of the cameras to tell us what a terrible idea it is because it’ll cost the economy a bazillion pounds.

A study by the Centre for Economics & Business Research (CEBR) suggested every bank holiday costs the UK economy £2.3billion.

Of course, every bank holiday has a positive economic impact too. People are perhaps more likely to go out socialising two or three times on a weekend if the holiday is on a Monday, they might be more likely to buy DIY equipment, while busier workers might take the opportunity to do some shopping.

Public holidays also have a positive impact on wellbeing and national happiness – though this would depend on multiple factors like the usual weather at the time of year and what the bank holiday is for (state funerals being more sombre than a Royal wedding, for example).

Public Holidays: What could an independent Wales do differently?

You would assume that if Wales ever got the prerequisite powers under devolution, St David’s Day would be made a bank holiday (as St Patrick’s Day and St Andrew’s Day in Northern Ireland and Scotland respectively). We don’t really need independence to agree with that.

In terms of the broader picture under independence, there would be a chance to radically change the public holiday calendar.

The big problem with the current calendar is that public holidays aren’t spread out particularly well. There’s a big gap between New Year’s Day and Easter, and another big gap between August and Christmas. We also (inexplicably) have two bank holidays in May – mainly a legacy of fixing Whit Monday on a single date. 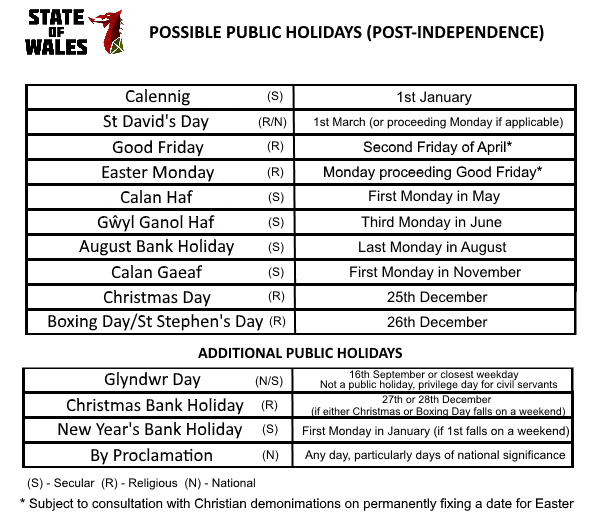 The New Year’s-Easter gap can easily be filled by a St David’s Day national holiday; you would assume this would be picked as the date on which Wales would hypothetically become independent after any transition period. By moving the spring bank holiday here, on paper it wouldn’t have any impact on the economy.

There has been discussion around fixing a permanent date for Easter (which would make scheduling holidays a bit easier). Wales could do this unilaterally in consultation with the western Christian denominations (Anglican, non-conformist and Catholic) or wait for them to decide themselves; as Father Jack would say, “That would be an ecumenical matter”. The second or third weekend of April has been suggested by the current Archbishop of Canterbury.

Extra public holidays could be created between May and August (Gwyl Ganol Haf/Midsummer) and between August and December (Calan Gaeaf) – both named (for the sake of naming them) after traditional Welsh festivals. Combined with St David’s Day this would increase the number of public holidays in Wales from 8 to 10, which would still be behind the European average but more than at present and better spread out.

That could increase to 11 if the Whitsun/Spring Bank Holiday at the end of May was retained. There may also be no need to increase the number of public holidays , perhaps even reduce them, if work patterns changed (i.e. four-day working week).

Glyndwr Day (16th September or closest weekday) could be included as a non-official/parliamentary holiday which civil servants can take as a privilege day. I envisage it being used for the official annual opening of the Senedd by the head of state.

Presumably, the Welsh head of state – whoever that might be and in whatever form that might take – will have the power to proclaim national holidays, whether for good reasons (i.e. Wales winning a Rugby World Cup), as a one-off (i.e. 75th, 100th anniversary of VE Day) or for bad reasons (national emergency, state funeral). If Wales retained the monarchy you would expect major Royal events to be public holidays as they currently are. 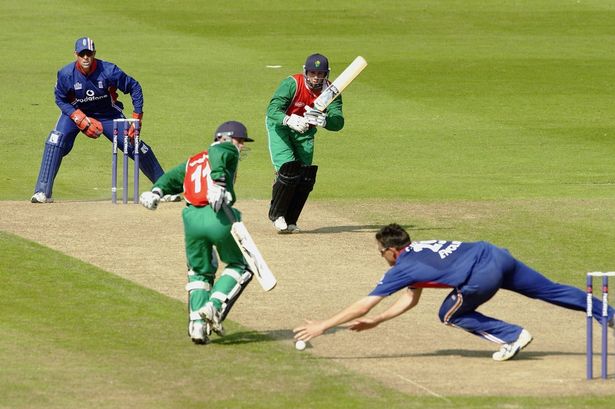