How have Wales’ MEPs performed? 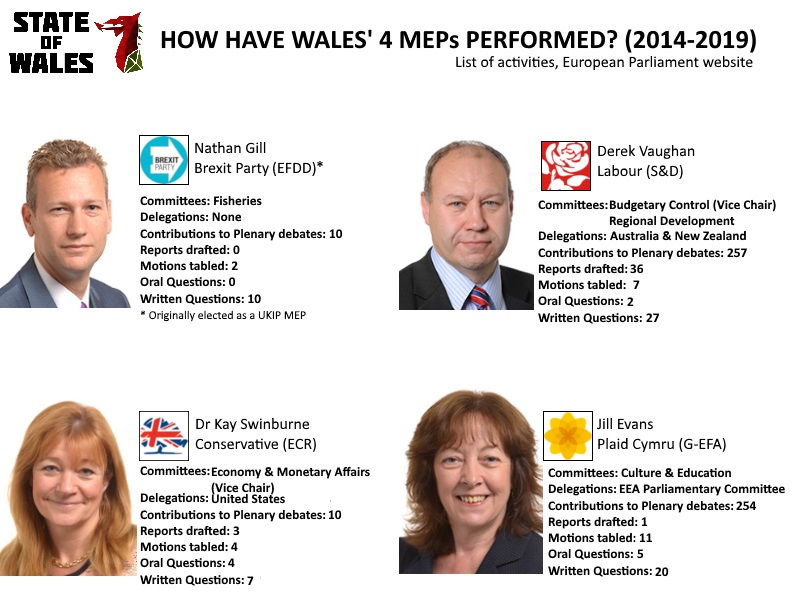 On any objective assessment, Labour’s Derek Vaughan contributed the most of the Welsh MEPs, closely followed by Plaid Cymru’s Jill Evans. Only Jill Evans and Nathan Gill are standing this time around though.

1. “Taking Back Control”: The Brexit Process

We still don’t have any idea of precisely how the UK will leave the EU or even when. The problem has been that, far from there being competing ideas as to how to achieve a Brexit that honours the 2016 referendum whilst minimising damage, it’s fallen back to Remain vs Leave arguments.

Leave voters are almost certainly going to fall into line behind The Brexit Party and their seemingly inevitable first place will be used by Brexiteer Tories and others to put “No Deal” back on the table.

If this election goes as badly for the Conservatives and Labour as it’s expected to – in line with the local elections in England earlier this month – then it’s likely to put even more pressure on Theresa May and Jeremy Corbyn to reach an agreement that would enjoy the support of a majority of MPs. That’s heading towards “Customs Union” territory.

The pair of them are so stubborn though, it’s still hard to see where the breakthrough is going to come from.

2. A second referendum by stealth?

Remain parties are bigging this up as a chance to stop Brexit or get a second referendum on the table; Brexiteers are doing the opposite. Neither of them is right and, ultimately, the result of this election can’t do anything besides indicating the relative strength of feeling for or against Brexit.

In that case, the Remain side has already cocked this up.

There’s a very obvious pro-Brexit option on the ballot paper (Brexit Party) alongside more extreme options like UKIP. For Remainers in Wales, there’s going to be four choices for pro-People’s Vote parties (Plaid, Change UK, Lib Dems and the Greens) and Labour has said they’re all things to everyone to confuse things further.

There had to be an option on the ballot with “Remain” in the name. That could well have been a joint list of pro-Remain and People’s Vote candidates, with the lead Remain party in each region getting the top spot and working down from there.

Instead, there’s a smug-off between the Remain parties to prove “We know best!” – exactly the kind of insufferable condescending attitude that lead to large swathes of the UK voting Leave in the first place.

The Lib Dems and Change UK are hipsters sneering at each other across the vintage store, both taking a, “We were Remain before it was cool and nobody else is allowed” approach. They don’t want to win, they want to be proven right, meaning – in the spirit of the Lib Dem’s new found candour –  both of them are acting like a bunch of wankers.

While Plaid realise the maths of the situation (mainly because it favours them), they’ve seen votes in it for themselves in other elections and are acting as though the Brexit agreement with the Welsh Government and their lukewarm campaigning for Remain didn’t happen. Meanwhile, the Greens are just going to mess everything up by taking X% away from the lead Remain parties for absolutely no reason.

If this was really about putting Remain or a second referendum on the agenda, the parties should’ve been able to put their political differences aside for the good of the cause. They haven’t and they’re going to pay the price for that in the form of Farage’s rictus grin on May 27th and a fresh push for “No Deal”. Congratulations. *slow hand clap*

3. A referendum on Theresa May’s leadership?

You’ve got to give Theresa May some credit: she’s got staying power. That’s probably because there’s no choice for the Tories but to keep her in office in light of there being no clear alternative leader/Prime Minister who can unite the UK and Parliament behind a single Brexit vision.

This year’s English local elections, as said, were dire for the Tories. We know Theresa May will be going at some point before the next scheduled UK General Election, but if there’s another bad result in this election, it might well be enough for some senior members of the party to demand an immediate leadership change. The signs at the moment aren’t looking good for Theresa and the manoeuvring has begun in earnest.

This election will likely prove once and for all that Nigel Farage has been and forever will be bigger than UKIP. Much like the 2016 Leave campaign, the Brexit Party have got out of blocks for this election far faster than their opponents.

To those on the right – particularly blue-collar conservatives – Farage has cultivated a persona of a Terry-Thomas style loveable cad; someone who just about manages to stay on the side of “right opinion”, offering a nudge and a wink to more extreme views without outwardly expressing them.

They’ve got the bandwagon, it’s pretty obvious what they stand for (despite not having any policies), they seem to be suspiciously well resourced and they have Farage. They’re going to come out on top and in a big way.

While Farage is eager to mask his more extreme views – which perhaps makes him more dangerous – UKIP now uses a cudgel to smack you around the head with them.

Their support is much weaker than it has been, but it’s still likely to be just about good enough for them to win seats – much like the BNP have in past European elections. Their co-opting of Stephen Yaxley-Lennon and offer of full candidacy to various alt-right e-celebrities has certainly kept them in the headlines when they were otherwise doomed to irrelevance.

But it remains to be seen what deep insight a football hooligan and convicted fraudster who likes wearing milkshake, a shitposter who taught a dog to do a Nazi salute and a gamer who think rape jokes are edgy really brings to the table other than an experiment in how far free speech can go. In that case, they’re hardly Hannah Arendt are they?

They can say what they want, though free speech isn’t there to shield people from the consequences of what they say; it’s there to allow them to express themselves without government interference. The worst thing you can do is give them an audience because when it comes down to it they’ve got nothing to say.