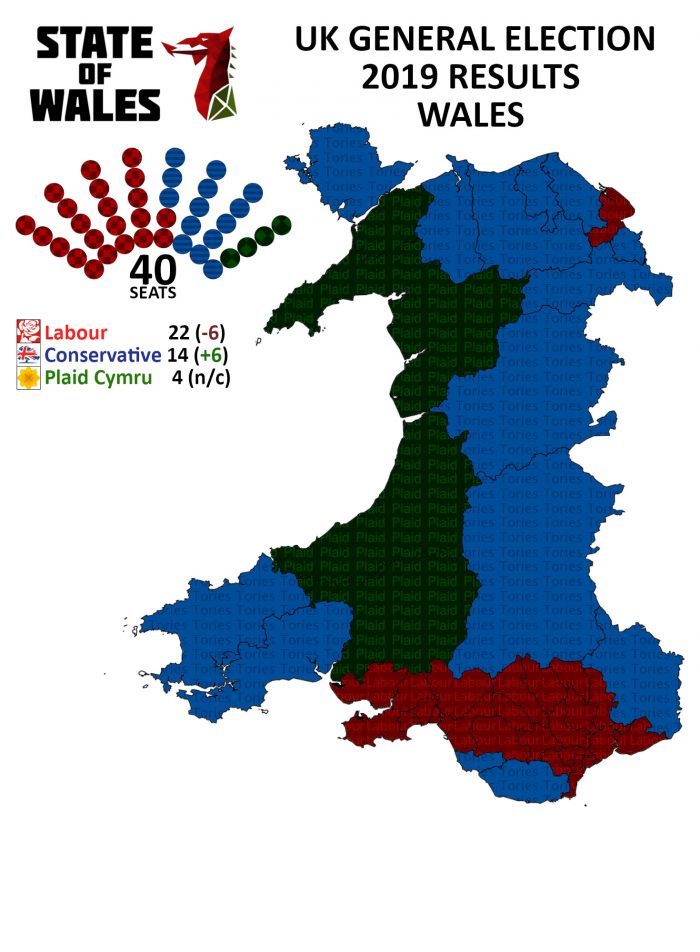 In the end, the Welsh polls were almost spot-on.

While Labour wasn’t completely wiped out in the north, it’ll certainly feel like it. The Tories have achieved their best result in Wales since 1983 (and Labour their worst since the 1930s), taking seats like Wrexham and Clwyd South for the first time and also seeing the election of the first women Tory MPs. For the Conservatives in Wales, this is a dreamland result and they came very close to winning both Newport seats, Gower and even Carms. E & Dinefwr.

My only surprise is that people are surprised at the Bridgend result – it’s been coming for some time and while Brexit will have played its part, it’s as much down to an increasingly unpopular Bridgend Council and slow rot in Labour support south of the M4. I’ve given Labour people in and around Bridgend plenty of veiled warnings about this at Oggy Bloggy Ogwr. The good news for Labour is the Valleys held firm, albeit at reduced majorities, but that’s where Labour’s campaign machinery has traditionally been stronger. Labour also performed particularly well in Cardiff and Swansea despite a Tory threat to Cardiff North in the former.

Plaid MPs didn’t want this election but all in all they’ll be satisfied with how this turned out (as I touch on later).

Just proving how cruel politics can be, Jane Dodds’ term as an MP lasted just over three months (until dissolution) and the Lib Dems face yet another uphill battle to regain a presence in Wales. Whenever Peter Black mentions other parties (of which he’s fond of doing so with regard to Plaid Cymru) as being “an irrelevance”, this happens. Just saying.

As expected, the Brexit Party did well in the south-east but didn’t exceed what UKIP achieved in 2015. They didn’t come close to winning any seats and they finished either just behind or in front of Plaid Cymru scrambling for third, fourth or fifth place in most cases. 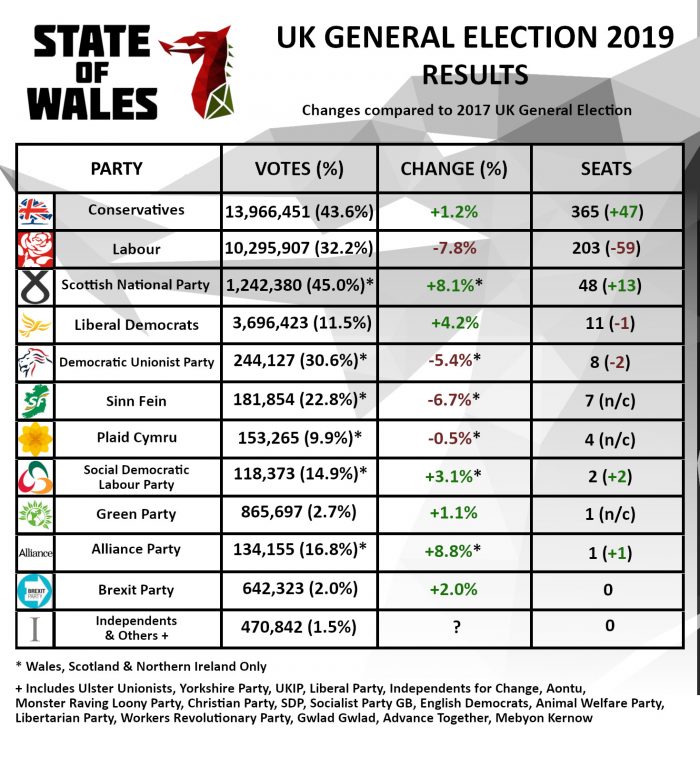 What does this mean?

“People’s Vote” is dead; Brexit is definitely going to happen – “The People” have spoken quite loudly: Get Brexit Done. There’s no obstacle to the Withdrawal Agreement passing before the end of January and the UK will be out of the EU completely by December 2020 (at the end of the transition period).

This raises all sorts of questions regarding the speed by which a trade deal can be reached with the EU. For the time being, it’ll be best for AMs to debate the practicalities and prepare for what’s coming instead of making vain attempts to stop the unstoppable and influence things over which they have no influence. In a few years time, it can re-emerge as a campaign to rejoin the EU, but for now, the idea of a second referendum is stone dead and this marks the point at which Remain was finally beaten.

Radicalism is alive and kicking (on the right) – Look through the Tory manifesto again and take note of some of the policies: compulsory voter ID, an immigration points system, ending automatic halfway prison release, increasing military spending, negotiating 80% of current trade agreements within three years and a number of constitutional reforms which have gone under the radar (and are potentially quite sinister). For the Conservatives, this is as radical a platform as there’s ever been and the new intake of MPs are very much “drys” instead of “wets”. It’s the 1980s all over again – and we know how that turned out for Wales. Remember too there’s a commitment to push through boundary reforms which will reduce the number of MPs in Wales to 29.

The end of Corbyn (but maybe not the end of Corbynism) – Jeremy Corbyn says he won’t lead Labour into the next general election, but he’ll likely go once any “inquest” has been completed – probably before next year’s English local and PCC elections. This result is slightly worse than Michael Foot in 1983, suggesting he overachieved in 2017 and should’ve gone out on a high. Anecdotally speaking, there were more questions over him personally than Labour’s policies, so it may have been the case of having the right message but the wrong messenger.

The natural reaction would be to suggest Labour shifts back towards the moderate centre-ground – but with Momentum’s influence that’s easier said than done. You would expect Labour to make a conscious effort to ensure the next leader is a woman and someone from the Corbynite wing – like Angela Rayner or Rebecca Long-Bailey – might be able to reconnect with voters lost in the north of England alienated by Corbynistas’ metropolitan-style socialism. Wales is a different story, but more on that in the next few days.

Plaid Cymru will be more relieved than anything else – As said, Plaid MPs voted against holding an election, probably out of fear for what might happen. It had all the makings of a disaster: a winter election, squeezed by two populist idealogues, holding two marginal seats. In the end, despite a drop in overall vote share and a scare in Carmarthen East, they needn’t have worried so much. Ceredigion and Arfon are safe seats now. The only disappointment was Ynys Môn but that’s worth looking at another time.

The Brexit Party was of more use to other parties than Unite to Remain – If you’re going to have an electoral pact under first-past-the-post it has to be in every seat, not done selectively. In the end, the pact didn’t make a blind bit of difference either way; Plaid came third in Ynys Môn and Llanelli and the Lib Dems promptly lost Brecon & Radnorshire. The Brexit Party, arguably, helped everyone except themselves; they helped Plaid retain Carmarthen E. & Dinefwr, saved a number of Labour seats (including Alun & Deeside and Gower) and probably helped the Tories win Bridgend and Clwyd South.

Scottish independence and a United Ireland are back on the table (but won’t be easy) – The SNP have performed admirably yet again, though not quite as well as the exit poll indicated. The single biggest bulwark against perpetual right-wing rule from London (if that’s not what you want, it’s clear many voters in Wales do want it) is independence. The Scots realise it all in all, but Labour and the Lib Dems clearly don’t. There’s a clear mandate for Scottish independence, but the downside is getting a second referendum won’t be easy as the Tories have the numbers to block any move. I don’t see how it can happen.

Meanwhile, in Northern Ireland there’s a nationalist majority for the first time in spite of a big drop in support for Sinn Fein. It seems the people of Ulster are rejecting the dog-whistle politics of the DUP and Sinn Fein and are gradually turning to more moderate voices like the SDLP and Alliance Party.

The Lib Dems are in terminal decline (again) – Any green shoots from 2017 and the Euro election have been well and truly stamped back into the ground. In the space of a couple of weeks, Jo Swinson has gone from being the next Prime Minister to unemployed. It’s hard to say where this is going to go as their biggest hope at staying relevant (in Welsh politics at least) is the Education Minister, Kirsty Williams. They can either plan for a future as a minor party rebuilding from the ground up, or they can continue to take a smug higher ground and face a genuine prospect of extinction.

The television debates have lost their value and need a rethink – Maybe you can argue the head-to-heads made more of a difference and had more cut-through than the multi-party debates, but I doubt anyone’s mind was changed by any of them. Green and Plaid leaders and candidates performed reasonably well but there was no pay-off for them. The collective importance of the debates has been massively overplayed and if anything we need fewer of them – a maximum of three, not the seemingly 10+ (that doesn’t including the unofficial debates like Andrew Neil grillings). You can get fatigued watching these things very easily and I say that as a supposed political anorak.

Once I’ve done some number crunching I’ll have a more detailed look at the results in Wales and what it means for the parties etc. in the coming days – probably no later than Monday (16th Dec). 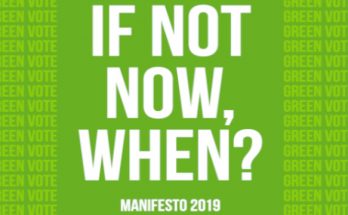