We’re all familiar with the big long-term challenges facing Wales (and, in some cases, the rest of the world) that generate a lot of publicity – regardless of whether it leads to action or not. This includes climate change, homelessness/rough-sleeping, fake news/strength of the media generally, gender equality, racism and so on….and that’s before mentioning that Brexit stuff.

At the start of a new decade, what are the issues going under the radar and likely to come as a nasty surprise to decision-makers if we don’t take them as seriously as we should be doing?

The NHS has wised-up to this, but it could be a case of too little, too late.

One of the main drivers in improved life expectancy in the developed world over the last century has been improved access to antibiotics and vaccines, as well as improvements to living conditions which limit exposure to infections (i.e. improved sanitation). Ironically, this may also have created a massive health time bomb.

Bacteria and alike might be relatively simple organisms, but they can adapt very quickly under the same principles of natural selection as any other species – if one strain of bacteria becomes resistant to antibiotics due to genetic mutations, it’ll stand a greater chance of survival than those which don’t mutate. Through horizontal gene transfer, they can pass these mutations to other bacteria quickly.

The main driver for resistance to antibiotics has been their overuse – in both medicine and agriculture – which creates an environment which forces bacteria to adapt more quickly. Other contributory factors include not properly finishing a course of antibiotics, poor hygiene (in healthcare settings) and a slowdown in both the development of the next generation of antibiotics and vaccine take-up.

Just to underline the danger here, sepsis (aka. septicaemia) – ultimately the body’s overreaction to infection – already kills more people annually than some of the most common forms of cancer, while bacterial pneumonia has always ranked high up the list of causes of death.

Mass antibiotic resistance is likely to be most keenly felt in the developing world first (as it usually is), but this would mean we could see diseases like TB, typhoid and diphtheria eventually make a comeback in the developed world, while some bacterial STIs (like gonorrhoea and syphilis) – and even the most common forms of food poisoning – may become untreatable, perhaps in some cases even fatal.

Dealing with the Dead 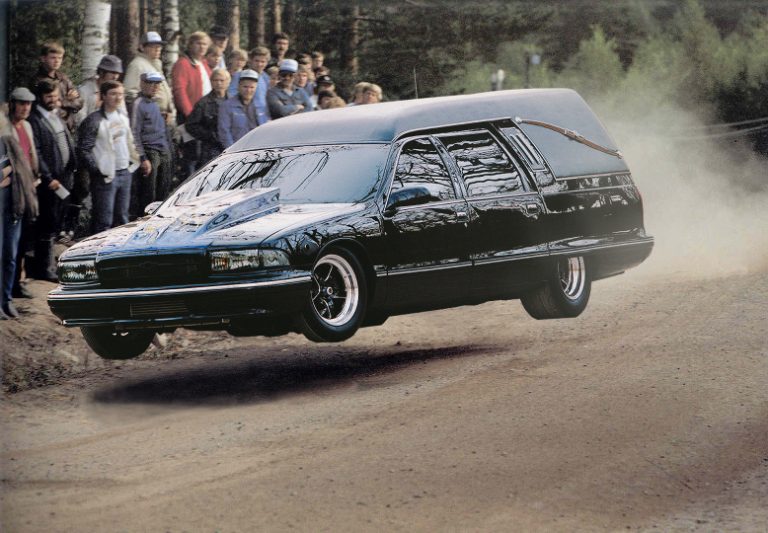 Wales is running out of cemetery space and has been for several years.

It’s not a simple case of picking an empty field on the outskirts of a settlement and plonking down a cemetery or crematorium as though it’s Sim City. Some sites might be unsuitable due to drainage issues or might have underlying geological problems, while many present cemeteries may have expanded as far as they realistically can.

There’s also a question of public safety. Some cemeteries in Wales are hundreds of years old with memorials as old to match – many of which have since been rendered unsafe. Local government cost-cutting in light of austerity may also have put pressure on councils to maintain public cemeteries to a lower standard than they used to be maintained.

The Financial Times claims that a lack of space has been a driving factor behind the rising cost of funerals – which in Wales is now anything up to and beyond £4,000. While the number of public health funerals (aka. pauper’s funerals) in Wales is relatively small, they’re on the increase too as a result.

Although cremation is generally cheaper – with some funeral directors offering ceremony-less direct cremations for around £1,000 – there are growing environmental concerns due to the number of heavy metals released into the atmosphere from things like fillings, hip replacements and Slayer.

One alternative that’s emerged in the last few years is alkaline hydrolysis (aka. water cremation) which liquifies remains, but is itself controversial as the “off spill” (i.e. you) is usually released into the sewerage system. Green burials (where bodies are buried to decompose naturally) are another alternative, but face similar space issues as an ordinary burial.

Birth rates in the developed world have been falling for some time, largely as a result of social progress: improved access to contraception and safe abortion, improved education and employment prospects for women and lower infant mortality (meaning smaller families).

That said, fertility rates in Wales have been consistently below the level needed to “naturally” maintain the population (birth rate matching death rates) – known as the replacement rate, which roughly lies at 2(.1) children per woman over their lifetime. 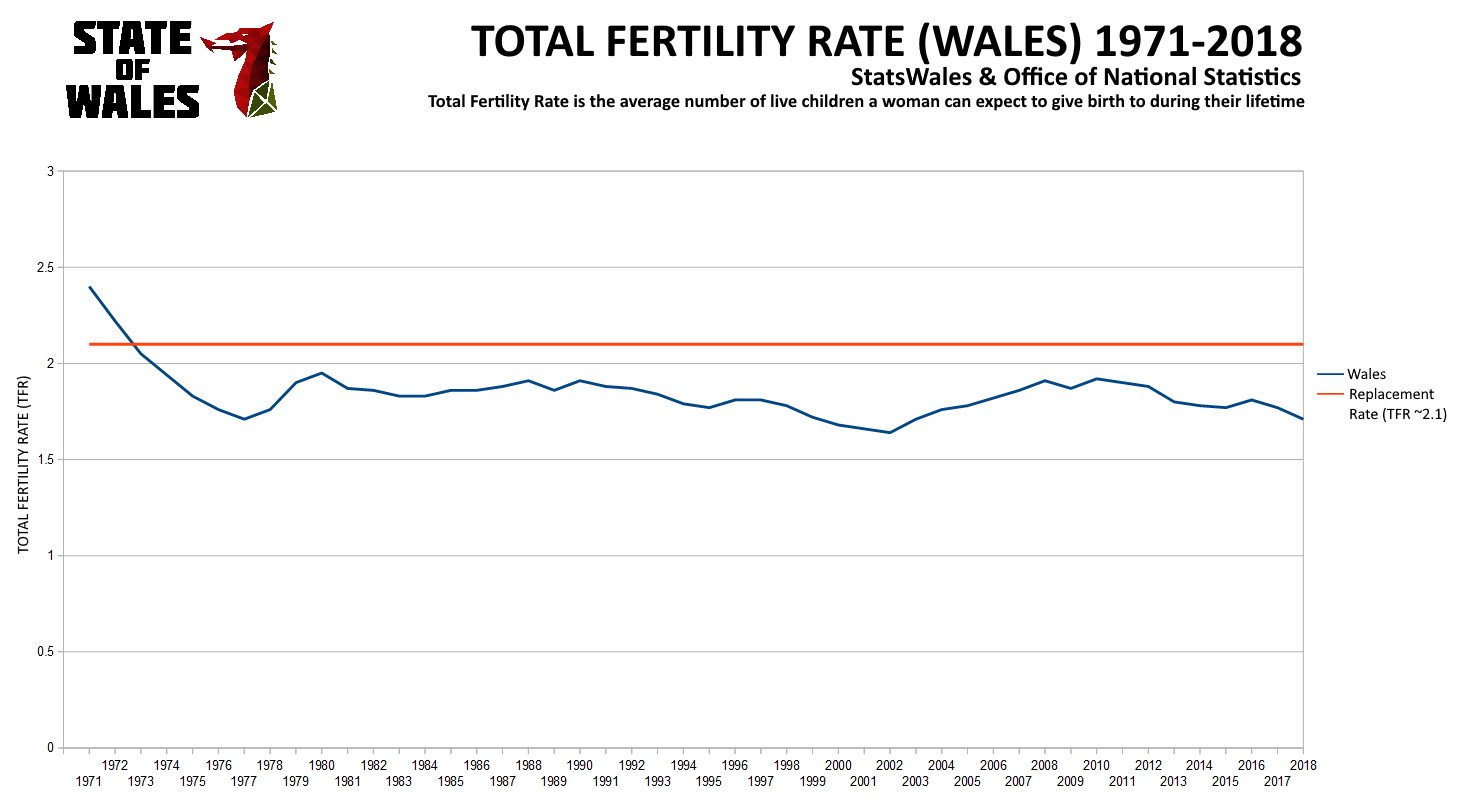 In Wales, the birth rate hasn’t been above the replacement rate since the 1970s and despite relative stability since then (with the occasional mini baby boom), the population of Wales is in a long-term steady natural decline.

While the obvious positive from this is a possible reduction in environmental and resource stress, this has all sorts of potentially negative socio-economic implications too, including the demographic ageing of Wales (topped up by retiree migration) and the impact this has on the ratio between working-age people and the dependent population (see also – What we were told about the future of Wales) – not to mention the political implications of an older population.

While the overall population of Wales has increased during this period (mid-year estimates for 2018 put the Welsh population at just under 3.14million) it’s likely driven more by migration (including temporary migration by students from outside Wales) than births.

A Cardiff University projection suggests the Welsh population will begin to decline from 2023 onwards, described as the “first period of sustained population decline in a century”.

This could naturally have implications, long-term, for the amount of money Wales receives via the Barnett Formula (if it isn’t replaced) and, in the context of independence, relative tax revenues and spending priorities.

Compared to most of the developed world though, the expected Welsh population decline is mild. The Baltic states, Japan, Italy, Germany, Spain and much of eastern Europe are already much further along the process; some parts of Lithuania have lost 50% of their population, while Italy is expected to lose up to 6million people by 2050.

Underpopulation could end retirement and the welfare system in the UK as we know it (because it would become unaffordable) and probably lead to unexpected consequences such as weakened military and foreign power projection, declining sport performance, deflation, labour shortages (which might lead to pay increases to compensate), declining innovation and, in an attempt to deal with it in the short-term, massively increased immigration from outside of Europe which could have consequences of its own such as increased far-right extremism.

The Crisis in Grassroots Sport

This one’s a bit of a cheat because people are discussing it – though perhaps not with the sense of urgency the issue deserves.

Amateurism has traditionally driven grassroots sport in Wales; every village used to be able to put out multiple teams in many cases. Apart from national cups, until the 1980s onwards there was little in the way of organised structure. There were various merit tables and alike, but competition was often regional in scope and driven by local (and in some cases cross-border) rivalries. With no great tradition of attending matches in Wales, the emphasis has always been on the team and the club, not necessarily producing elite athletes or economics.

With the advent of professionalism – particularly in rugby union – the demands on players and individual clubs have become so great that some clubs struggle to put teams out or even keep the floodlights on. There’s long been a clash between the business and regulatory elements of sport and the social/community element. The Welsh Premiership (rugby) is/was supposed to be a development league for the four regions. Instead, many of the Premiership clubs have sought investment to become forces in their own right (as the WRU cuts back funding) – putting out older players who may or may not have played at the highest level – while youth development largely falls by the wayside or is left to clubs lower down the pyramid and regional academies.

While money in sport below the professional level in Wales isn’t great anyway, promotion and relegation can still be ruinous and even if a club loses relatively small sums of money or faces an unexpected bill it can put them on the brink of ceasing to exist.

Injuries are also said to be getting worse and the smaller clubs don’t have the resources to be able to deal with lengthy lay-offs for players who may simply “retire” after youth-grade rugby.

There’s now far more choice when it comes to keeping entertained and occupied – grassroots sport has to compete with the virtual variety, while some so-called amateur teams have to pay players to turn out. Games in the lower divisions are also regularly called off due to lack of players or poor playing conditions.

That said, it’s not the case that every organised sporting activity is seeing a decline in participation. Park Run events are quite popular as are things like Leisure League 5 and 6-a-side football. Women’s sport in general – particularly women’s football – is going through an unprecedented period of growth. You usually won’t find many problems filling teams for those below the age of 14-16 either.

The situation has seen some big shifts in local power structures. Maesteg used to be one of the biggest household names in club rugby but recently had to drop down to Division Three. Maesteg Quins and Maesteg Celtic have since overtaken them in the pyramid.

There’s no easy or palatable solution to this, but it could lie in shorter seasons with fewer, higher-intensity games, ending promotion and relegation in some circumstances/a franchise system – and even (I’m putting my life on the line saying this) club mergers; if you want an example of a merger working successfully, there’s the Cymru Premier’s Penybont FC (Bridgend Town and Bryntirion Athletic) – but even then it was fuelled by necessity and money from a new ASDA supermarket.