After being selected by Twitter followers and non-followers, this latest detailed series of posts will look at how the constitution might work in an independent Wales.

As it hasn’t taken me as long to do as first thought, and due to the coronavirus pandemic slowing work down on the Senedd side of things for the forseeable future, I’ve brought it it forward, publishing articles every week into the summer.

This is a particularly complicated subject. The posts themselves are split into four broad themes containing several individual articles. Here’s what’s coming up:

Theme 4: Rights in a Welsh Constitution

What’s the point of a constitution?

The constitution is an agreed set of principles and ground rules for how a state works and is usually the highest law in the land.

Constitutions can also radically differ from nation to nation (which I come back to later). Some are written, some are unwritten. Some have lengthy clauses covering absolutely everything to the letter, others are basic and left open to interpretation by the courts.

Constitutions, of course, aren’t the sole preserve of nation-states. Local councils, corporations and international organisations like the EU and UN have constitutions – though they may not be called as such.

There’s no right or wrong way to draft a constitution and there’s been lengthy academic debate and entire theories dedicated to constitutional design – though I’ll come back to this in later articles (Part IIIa, Part IIIb).

Generally speaking, the role of a nation’s constitution is to: 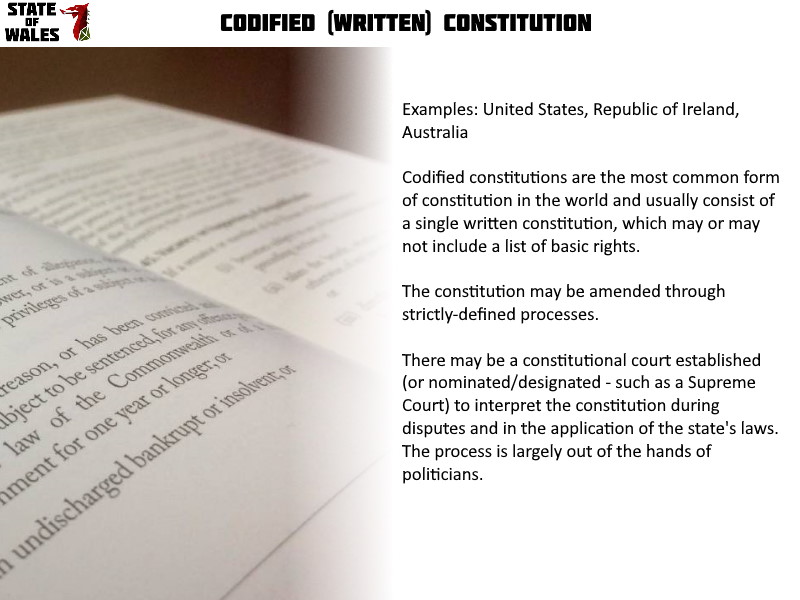 Clear checks and balances on state power – The biggest advantage is that everyone knows where they stand and instead of vague concepts such as parliamentary sovereignty (Part II), there’s usually clear separation between the legislature, executive/government and the judiciary/courts.

Justiciability – In a codified system, all laws are usually judged against the constitution (as the highest law in the land) independently by the courts. This means it’s easier to challenge the government in court and means policy-makers and legislators have to think very carefully about the constitutionality of the laws they introduce. This doesn’t mean that governments are unable to act in an emergency (most written constitutions have clauses on emergency powers – Part VI), but it does mean they’re kept on a leash and there’s no concept of “parliamentary sovereignty”.

Entrenchment (Good) – Constitutions are usually hard to amend or overrule, giving greater/more permanent protection to the rights of citizens (if a constitution includes them). The chances of a constitutional crisis diminish because it’s often very clear where everyone stands (as mentioned above).

Rigidity of interpretation – Written/codified constitutions can include clauses which are strictly interpreted, instead of allowing a degree of flexibility and leeway. The obvious example would be the Second Amendment of the US Constitution on the right to bear arms, which was designed for a post-colonial period when the US still faced external threats and needed to maitain a citizen militia.

Entrenchment (Bad) – While this can be a strength, codified constitutions are often very difficult to amend (by design) meaning outdated or irrelevant clauses from the past become very hard to alter or remove. Some states with codified constitutions do have various processes for amendment, whether by referendum (Republic of Ireland, Australia), a lengthy formal ratification process which involves federal states (USA) or supermajorities in the respective parliament/legislature (Germany).

Judicial tyranny – Codified constitutions usually create a very powerful independent judiciary. While that sounds like a good thing, it also means that unelected judges can “legislate from the bench” and overturn laws – which elected representatives have passed or are trying to pass – based on their own judgement. If the judiciary is politically compromised (i.e. North Korea, China), then it renders any rights under a constitution null and void for the average person in the street (known as a facade constitution). 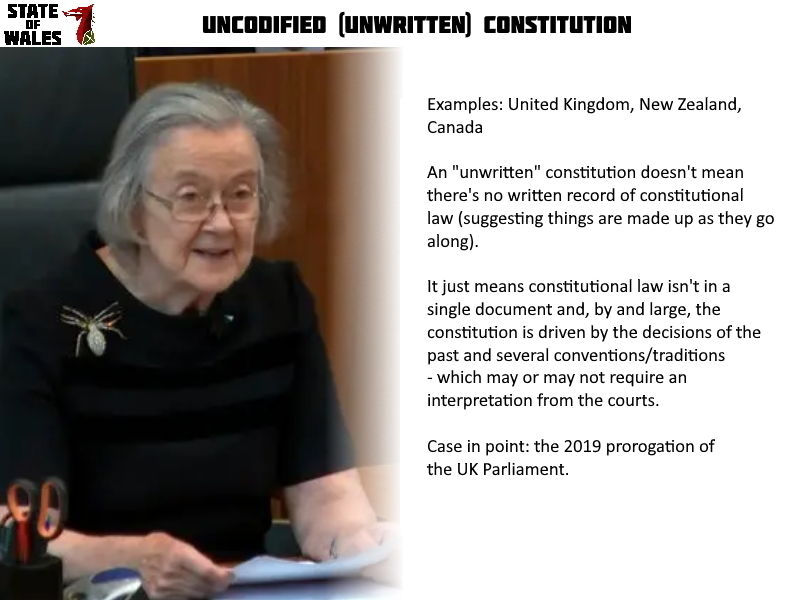 Maximum flexibility and adaptability – There are essentially no limits to what can or can’t be done in terms of constitutional law unless explicitly stated somewhere (i.e. Human Rights Act 1998). An uncodified constitution can easily evolve with changing social and political attitudes.

It’s inaccessible – Ordinary citizens may or may not know what their rights are and a single person can’t sit down and go through an uncodified constitution if there’s no single volume or set of documents. This distancing between a citizen and the rules of the state can give the impression of being repressed or subject to the whims of an entrenched elite who understand it all.

It’s easier for politicians and governments to abuse their power – While open interpretation can be a good thing in certain circumstances, it also means that ambiguity over where power ultimately lies can effectively hand the head of government or head of state with near-dictatorial powers; conventions can be readily ignored when it suits.

Separation of powers isn’t clearly defined – It’s often much harder to determine where power lies as well as the independence of the judiciary/courts. It’s all based on convention/tradition. As a result, an unwritten constitution may be “nonjusticiable”, meaning the courts find it more difficult to strike down new laws or actions which they believe to be unconstitutional. 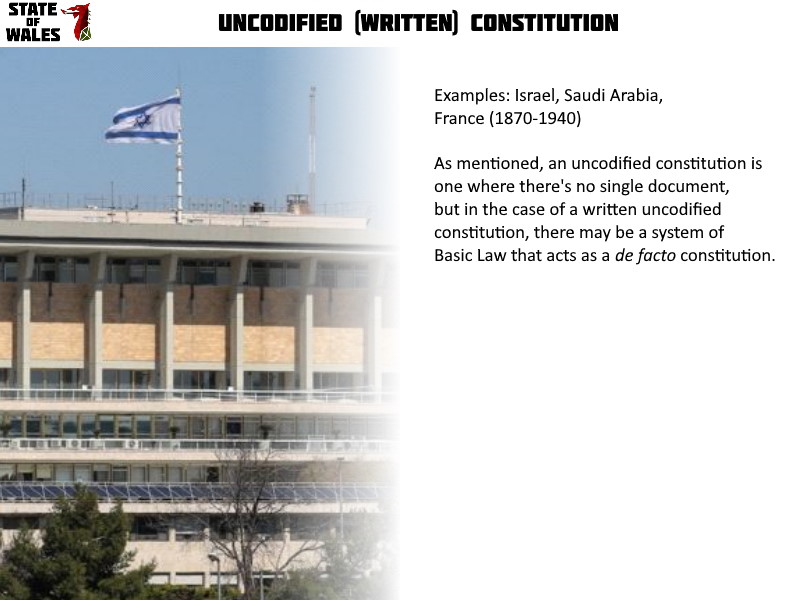