You could think that the only options for head of state are a constitutional monarch and some form of republic.  Other than the ones which are out of the question, one option that doesn’t get raised as often but could provide a balance between the two that equally satisfies (or dissatisfies) both camps is an elected monarch.

I’ll be looking into the possible powers and role of a Head of State in Part VII.

Top 3 Arguments for an Elective Monarch

A balance between apolitical monarchical pomp and a democratic mandate – As said, it theoretically provides the best of both worlds in the time-honoured Welsh tradition of “half n’ half”. You have some of the ceremony and pomp of a constitutional monarch, yet the same mandate from the people as a president in a republic; though in practical terms it would be a “crowned republic” in a more literal sense than the UK is.

Justifies a longer term of office, bringing an element of stability/familiarity – Ceremonial presidents tend to have longer terms than executive presidents anyway, but this could probably be extended even further for an elected monarch or could even be an appointment “for life”. With that comes some of the advantages of a constitutional monarch in terms of building diplomatic experience and a sense of familiarity/continuity which could foster political stability.

Anyone can become an elected monarch – Like an elected president, the office would be theoretically open to anybody and, as it would almost certainly be a ceremonial/figurehead role, the requirement for some measure of political experience and familiarity would probably be relaxed. It would probably be seen as an extension to the honours system – perhaps the highest honour – rather than a strictly political role.

Top 3 Arguments against an Elective Monarch

It’s a bit eccentric – Most nations either opt for a constitutional monarchy, absolute monarchy, a republic or a so-called “Democratic People’s Republic”. It would be a bit strange to be the third nation in Europe and one of the few globally with an elected monarch – though you could argue it would be a unique selling point too.

It would be a republic in practice, so what’s the point? – Compromises sometimes create something nobody likes instead of being something everyone tolerates and this might be an example of the former. If it works like a republic, then you might as well have a republic. Maintaining elements of the constitutional monarchy would be an attempt to cling on to things that are generally incompatible with a republic, including….

A royal title, even if elected, implies someone is “better” than everyone else and may evolve into hereditary position – Privilege is at the heart of any constitutional monarch and even an elected one would come with some element of elitism about it. We have a problem with nepotism in Wales and there are plenty of groups and organisations in civic society  which are theoretically open to anyone but may well act as gatekeepers. There’s a risk that if you create an elected office with a royal title, you’ll start to see the descendants of previous electees standing and winning, creating a semi-hereditary monarchy by stealth or even outright – even if that happens in republics too (Clinton, Kennedy, Bush families). 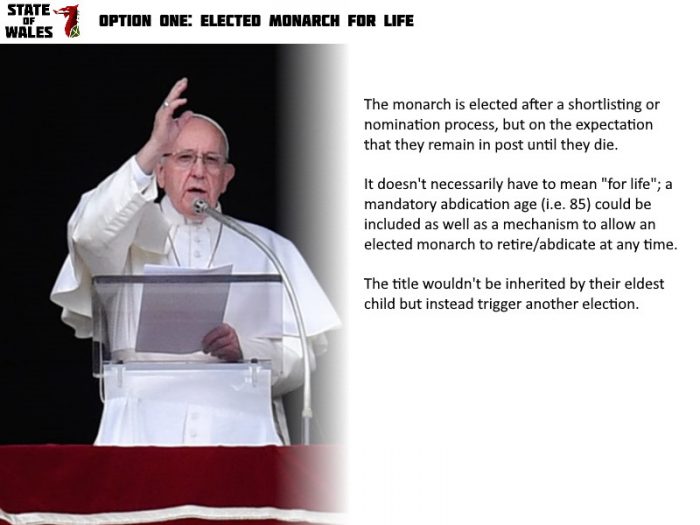 This is a bit closer to what we have now so is more “traditionalist” whilst retaining a democratic mandate.

The most well-known real-world example is the Pope as head of state of Vatican City. Other modern-day examples include Cambodia, as well as Saudi Arabia – whereby the heir to the throne is selected by the House of Saud at large.

A similar system was used historically in the Dutch Republic (Stadtholder), the Holy Roman Empire, Sweden and Poland-Lithuanian Commonwealth. Some English and Scottish monarchs have been chosen by their respective parliaments, notably William III and Mary II as joint monarchs (Part IX).

The obvious risk would be, as mentioned, that it would eventually evolve into a hereditary monarchy by default – as has happened in some of the nations which once had an elective monarch. 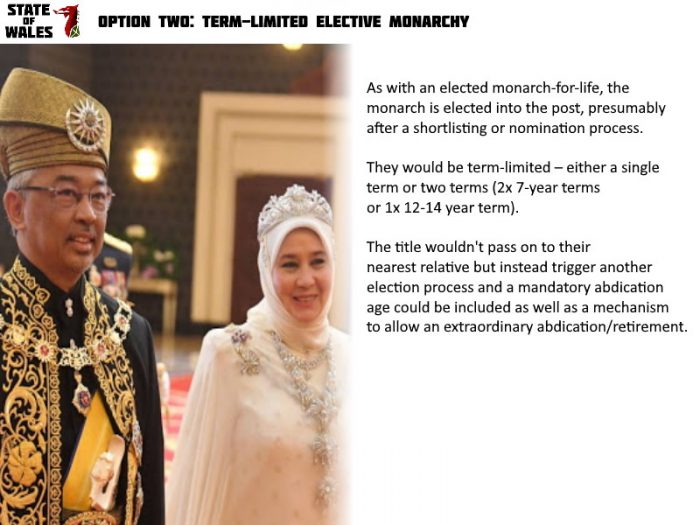 This is a bit closer to a republic and there would be little difference between this and a ceremonial president (Part IVb) other than having a regnal title and some of the pomp and ceremony associated with royalty.

There are several real-world examples where a term-limited monarch is elected including Malaysia, Samoa, the United Arab Emirates and Andorra (where the President of France serves as co-prince).

How would you nominate and elect a monarch?

Assuming the position was treated with a heightened sense of dignity than that of a president – and linked to the honours system – then the nominations process could be far more stringent.

In addition to nationality/citizenship and other requirements we might expect for a president of a republic (Part IVb), other clauses could be included such as banning prospective candidates from being a member of a political party for a certain number of years before seeking a nomination. Former elected officials at any tier of government could be banned from standing too – to prevent the position being used as some sort of political reward for time-serving.

The nomination and selection process could be stricter, perhaps even completely closed (done via a national convention of elected members and other appointed members akin to an Ascension Council), with potential candidates requiring a minimum number of votes to get onto the ballot.

There would probably be a general expectation that those seeking the office will have done some form of (non-political) public service, have good standing (crimes of conscience being exempted), have a reputation for selflessness as well as an ability to bring dignity to the role. They would likely be already well-known to the public.

Candidates shouldn’t be able to nominate themselves unless they were seeking re-election (if there is a system of re-election and they don’t simply serve a single term).

The options for election would likely be the same as that in a republic, with alternative vote perhaps being the best option (Part IVb).

Practicalities of an Elective Monarchy

There would be some big differences between a president in a republic and an elective monarch.

Title & Style – An elective monarch would have a royal title – possibly Tywysog(es) Cymru (English: Prince(ess) of Wales) – and would choose a Welsh language regnal name like a constitutional monarch (Part IVa). Wales would be known as “Principality of Wales” in the proper sense because the head of state would be a Prince or Princess. The style would probably be “Their Excellency” or “Their Highness” with some sort of recognition for former Tywysog(es) and their consorts.

We could probably do away with bowing and curtseying except for the investiture ceremony itself. The office could have enough flexibility that each Tywysog(es) changes the style and tone to suit their own needs. So we could have a more informal “republican” style Tywysog(es) who does away with some of the ceremonial aspects, as well as a more formal “regnal” Tywysog(es) depending on their personal preferences.

Official Residence – Same issue as Part IVa; but you could make an argument for the residence to be “grander” than might otherwise be the case due to the nature of the office.

Gender Balance – As with a republic (Part IVb), the Constitution could include a clause that each incoming Head of State is the opposite gender of the preceding one – which would be easier to do if a Tywysog(es) served a single term. So if the first post-Constitution elective monarch is a man, the next one would be subject to an all-woman shortlist and vice-versa.