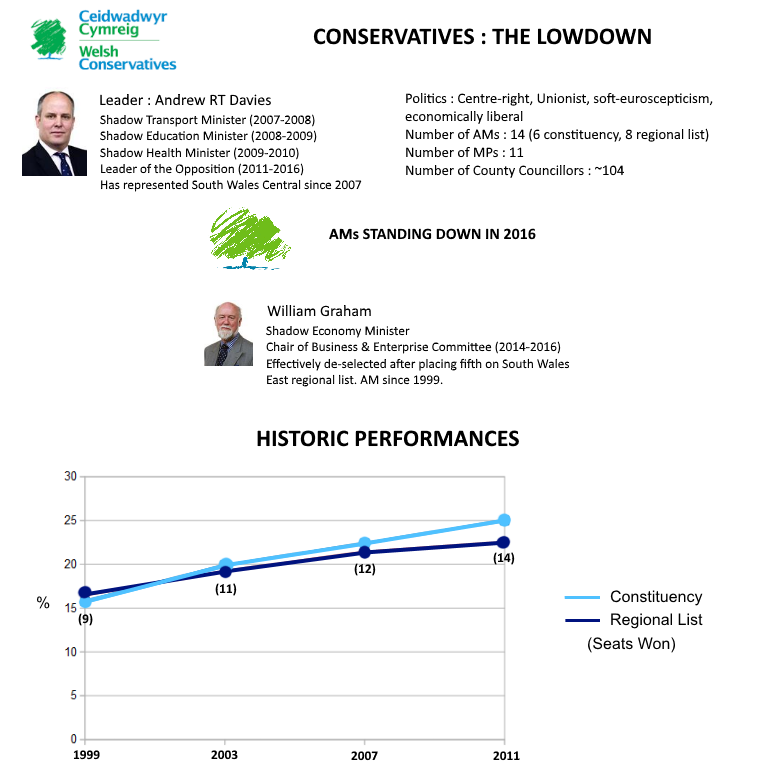 The results of the 2011 election were a shock to the system for the Welsh Conservatives. They had a good night, despite the difficulties of being an incumbent party in power at Westminster, but they also lost two of their bright stars – their reforming leader Nick Bourne and leader-in-waiting Jonathan Morgan.

Andrew RT Davies was subsequently narrowly elected Tory leader and Leader of the Opposition in the Assembly despite perhaps not being many people’s first choice. As a former Shadow Health Minister, he set his party’s stall out from the start to attack Labour’s management of the NHS, repeatedly calling for a full public inquiry (similar to the Keogh Inquiry in England) and backing a policy instituted in England to establish a ring-fenced fund for rare cancer treatments.

In the Assembly itself, the Welsh Conservatives are, generally, an effective group with a small number of stragglers who perhaps aren’t cut out for the job. The few attempts by Tory AMs to introduce backbench legislation have also been poor. In terms of legislative and committee scrutiny, however, their performance has been good if not excellent – particularly with regard the Human Transplantation Act 2013.

It’s clear that while Andrew Davies has, undoubtedly, grown into the role of Opposition Leader, there’s been tension between devolutionists and unionists – like the row between himself and then Welsh Secretary, David Jones, over income tax devolution. The Welsh Conservative group found themselves stuck between a rock and a hard place in supporting the principle of the Assembly being responsible for some of the money it spends, but at the same time disagreeing on how it should be done and to what extent.

The result was a very public falling out between Andrew and some of his backbenchers and devo-sceptic party members, which very easily could’ve led to a leadership challenge. Andrew won that round, and the news got better with the dismissal of David Jones, and the loss of two of his more vocal critics to Westminster after they became MPs in 2015.

With the UK Coalition Government “delivering” some of their promises on further devolution, and with economic growth returning to the UK – accompanied by a very good performance in the Westminster 2015 election – you can argue the Welsh Conservatives have every reason to be optimistic going into the Assembly election.

There are, however, significant storm clouds on the horizon.

Firstly, Wales has been hit particularly hard by UK Government cuts and the Welsh Conservatives propose cutting several devolved departments and universal benefits – like free prescriptions and tuition fee grants – to bolster the NHS. I doubt that’s a prospect that’ll go down well unless they can prove unequivocally that services would improve as a result; England’s NHS isn’t the land of milk and honey they think it is.

Secondly, they’ve given no indication of what they would do on public service reform/local government reorganisation in light of the Williams Commission other than hold costly referendums.

Thirdly, Europe and UKIP. Despite Andrew Davies’ own declaration in support of “Brexit”, no significant divisions within the Welsh Conservatives have appeared so far. Once the referendum campaign is in full swing, we might start to see Cardiff Bay Tories succumb to the same problems as their Westminster peers in order to stem UKIP, who are clearly threatening to out-manoeuvre the Tories on the right and could even cost them some seats.

A strong group of AMs – ….with one or two exceptions. As an opposition they’ve done the job reasonably well and that’s quite understandable because they’re often coming at things from a completely different perspective to the other parties. At times they perhaps take themselves too seriously, but what this generation of Tory AMs have never done is disrespect the institution or try to undermine it – probably because devolution is now wholly accepted at the top of the party. However, they do have a problem in that it’s clear many of the people who’ve sat on their benches see the Assembly as a stepping stone to Westminster.

Solid organisation – They got their act together last May to great effect. They’re not really into gimmicks and run traditional campaigns. Their mantle as “the resistance” to Labour and the left in general has probably dealt them a stronger hand than the other parties have given them credit for. With Jeremy Corbyn at the helm of Labour, the “silent minority” of right-leaning small-c conservatives in Wales could be drawn into the Tory fold. You could say the way the Welsh Conservatives are organised is excessively centralised, but it means they (usually) keep a tight lid on dissent.

A credible and genuine alternative – They’re the only established party in Wales offering something tangibly and practically different to the administrative social democracy of Labour, Lib Dems and Plaid (with regard devolved politics; they can’t do the same levels of damage as the Tories at UK level). It’s a cliche that “profit”and “market” are dirty words in Wales but I don’t think that’s necessarily true. There’s a large entrepreneurial community in Wales – the Welsh economy is marginally more dependent on small and medium businesses than the rest of the UK – that the Tories could tap into. It’s just they’ve never properly wedded that with support for public services (other than their obsession with the NHS).

Gaffe-prone – I don’t like to focus on things like this, but the Tories have made slip ups during the Fourth Assembly, and the behaviour and attitude of one or two of their number has let them down on occasion. The attempted “putsch” against their leader in 2013 at times verged on childish, while Nick Ramsay tarnished an excellent record as a committee chair and was certainly “tired and emotional” in the chamber which is completely inexcusable (it was his birthday, and you don’t have to be Columbo to put 2+2 together).

Unpopularity outside their core vote – The Tories will, for the foreseeable future, maintain a level of unpopularity which will prevent them leading a government or going into government as part of a coalition. They’re untouchable to the other parties in the Senedd, and it’s highly unlikely any other party would put up with a Conservative First Minister. I’ve said before that the way to solve this is to become a wholly-Welsh “Meldingite” federalist party which appeals to right-wing small-n nationalists – perhaps even going so far as to form a new liberal party with the Welsh Lib Dems under a completely new name and branding.

Leadership? – I’ve come to like Andrew RT Davies over the last five years. Not to drag out more cliches, but of all the leaders he’s the one “you could see yourself having a pint with” (you could say that of Leanne Wood too, and Carwyn Jones to a certain extent). His problem is you can’t picture him as First Minister. That’s not to say he hasn’t come a long way since being elected leader as his performance in the Senedd has improved dramatically. It’s just he might be a bit too boisterous for the big seat; so far we’ve put dull but affable eggheads there. What I will say though is he would certainly liven things up as a First Minister. 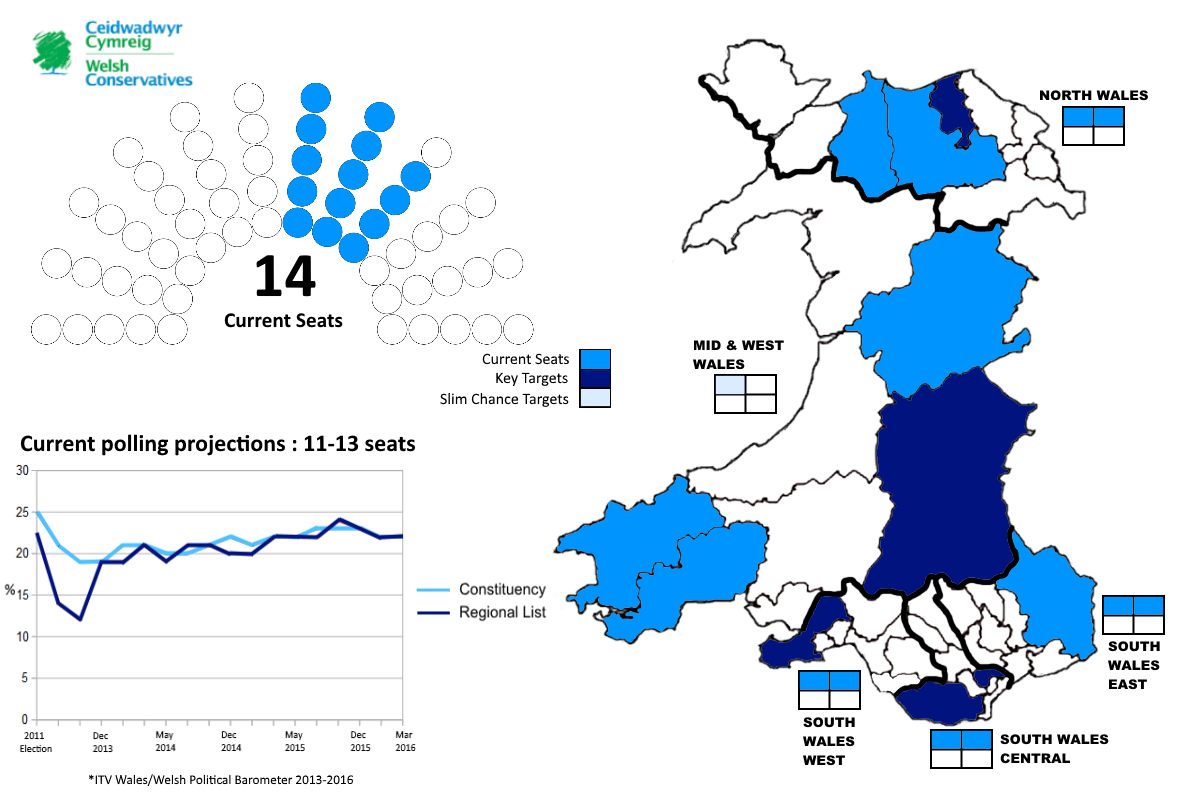 On long-term trends, the Conservatives are the only party other than UKIP who can say they’re on a clear upward trajectory and, as said earlier, have every reason to be optimistic going into the election. However, the latest poll was a blow, with indications they may lose their place as the official opposition as well as several list seats.

As long as they target their campaigning carefully, they might be able to endure a dip in votes without really losing anything. They’ll probably want to win, or retain, at least two seats on every regional list (except Mid & West Wales) because that’s where a bulk of Tory AMs come from, including some of their more capable AMs. Their FPTP/constituency seats should be safe.

Cardiff North is an obvious constituency target, as are Brecon & Radnor and the Vale of Glamorgan. They’ll probably be looking at Vale of Clwyd too following last year. But in order to form a government, they’ll effectively have to unseat the entire Labour front bench – taking seats like Bridgend, Wrexham, Clwyd South etc.

There’ll be a big push in Gower following their surprise victory last May and the fact Edwina Hart is stepping down – though Rebecca Evans appears to be a capable replacement. If Rebecca wins she could well prove as difficult to unseat as her predecessor so this might be the Tory’s only chance for the foreseeable future to take it.

Holding at least 12 seats, including retaining all of their current constituency seats. Any more than that would count as a pretty good result in the face of an expected UKIP surge. At a bare minimum you would expect the Welsh Tories to want to remain the official opposition, regardless of the numbers involved.

The unexpected loss of William Graham is a handicap in its own right. However, alongside that there’s losing their place as the official opposition (presumably to Plaid Cymru), and losing seats on the regional lists to UKIP.

As mentioned, the Welsh Tories are overly-reliant on regional AMs to make up their numbers, and the list elections are notoriously volatile. Perhaps two or three of their list seats are at a real risk of being lost. That includes David Melding, which would be a big blow to the overall capabilities of the Conservative Assembly group and a huge loss to the Assembly as an institution.