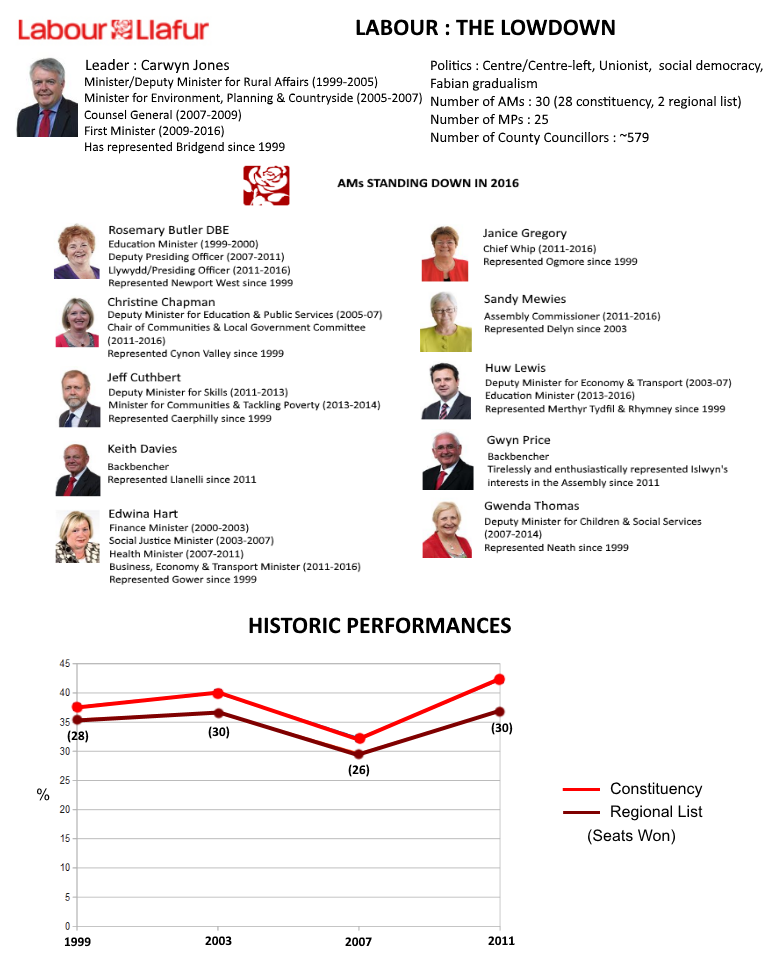 The story of Labour in the Assembly is essentially tied to their time in government. I’ve already covered that quite extensively (here, here, here, here and here), so this will be shorter than those for the other parties and I’m going to concentrate on Welsh Labour as a political group.

There’s a perception that the way the Assembly works doesn’t allow much room for backbench rebellion, but that’s been tested this term, with two significant but ultimately unsuccessful rebellions – one on the proposed smacking ban, the other on the M4 Newport bypass. Although the party came through unscathed, it perhaps shows their reputation for rigid discipline is starting to wane and backbenchers are beginning to speak for themselves a bit more.

Back in 2014, Prof. Gerald Holtham called for Labour to provide their own opposition in light of their entrenched status as the establishment party – though there’s still some way to go until we have a Westminster-style “backbench culture”. Meanwhile, it doesn’t appear as though the Corbynite-New Labour split at Westminster has transferred to the National Assembly despite AMs declaring for different sides during the leadership election.

It’s also fair to say the performances of some Labour backbenchers have been less than impressive, and this is becoming a long-term problem for the party. Nodding donkeys make good lobby fodder, but they don’t make good future ministers. That lack of talent and ideas – because since the advent of New Labour, the party have promoted loyalists to maintain discipline and party unity over “thinkers” – is the cancer that’s going to slowly wreck Labour unless addressed, as has happened in Scotland.

Clearly health is going to be the party’s Achilles heel, with the opposition focusing their attacks there – for good reason. To their advantage, they can point to some marked success with the economy, and will hope the opposition’s focus on health will give themselves a chance to point towards areas of policy where they’ve had success – like Jobs Growth Wales and capital investment – while glossing over their other big policy failure, which is secondary education.

Carwyn Jones – The most popular political leader in Wales (though that’s not saying much). The Welsh have traditionally been small-c conservatives when it comes to leadership changes and unseatings in politics are rare; despite our reputation for contrarianism we’re perhaps more likely to support an incumbent than we would care to admit. Of the people who occupied Labour’s front bench in the Fourth Assembly, Carwyn’s the only one you can see leading them. With no serious challenge to him he can focus on other things and doesn’t have to play to the party base as often. Unless something unthinkably catastrophic happens, Carwyn will still be First Minister on May 6th. That ought to be depressing for a country that calls itself a democracy, but that’s Wales for you.

A huge core vote – The Labour hegemony in south and north east Wales effectively gives them a 15-20% head start in every election, acting as a blocking vote which prevents other parties gaining a foothold. It requires nothing less than a Scottish-style democratic revolution to overturn it. That revolution doesn’t look like happening because of a disunited opposition – each party having significant support (so there’s no “single alternative” voters can agree on) – and the fact Labour have taken to small-n nationalism like a duck to water, even if they’re as British a party as Scottish Labour.

The state of the Welsh media – Safe to say, Welsh Labour wouldn’t last a single term with Fleet Street levels of scrutiny; the one occasion the London papers took a close look at their governance of Walesresulted in Labour ministers having kittens and panicking. Many people are going to see this as a Westminster mid-term because they’re reliant on Anglo-centric news, don’t understand how devolution works or don’t know what the Welsh Government are responsible for. The devolved elections have also already been eclipsed by the EU referendum. That’s a boost to any incumbent Welsh Government, as it means failures are glossed over and they can fallback to their default position since 2010 of blaming all Wales’ woes on a distant Conservative government in Westminster.

Poor government record (especially health)– I’ve never believed Labour have done as bad a job as some of its opponents claim, but the current state of Wales is hardly a ringing endorsement of their 17 years in power. They tend to get “the little things” right, and manage to score a UK or world first here or there in something trendy but not really a high priority – like sustainable development. Elsewhere, on the big and strategic issues, there’s little to suggest Labour are any good at running a country, seeing it as a series of localised or isolated issues that need to be pedantically micromanaged. They’re a bit like a doctor who only treats symptoms and not the cause of an illness; which usually results in bad outcomes for patients (i.e. us).

Crap AMs – Labour have foisted some truly awful AMs on us down the years. You look at some of the one’s who’ve served in the Fourth Assembly and you question how they got there. I have to presume a few of them are “time-servers” from local branches who are given a seat for a term or two to shut them up, but who can be relied upon to vote the right way at the right time. Other parties have a similar problem, but it’s more pronounced in Labour : there’s rarely any great oratory on the Labour benches, there’s little talent, there’s no visionary thinking and there’s very little scrutiny of what their own government are doing (outside the committee rooms). A handful of enthusiastic youngsters and polished careerists doesn’t mask the fact that Labour (and all parties to an extent) are in the early stages of political dementia in Wales (related : Is Wales a post-political country?).

Their vote is weakening – This is all relative as Labour are still way out in front as the largest party, but something that’s perhaps gone uncommented on in the past (except by the likes of the Wales Governance Centre) is just how much Labour’s support has shrunk since 1997. Aside from the occasional council by-election, the days of Labour regularly getting 50%+ of the vote are over, and the norm is becoming the 35-38% range. It’s still a big advantage due to FPTP, but even that won’t last forever. Once it falls into the high-20s, things will start to get interesting. The problem is it’s not the present opposition parties picking up that vote, it’s UKIP. 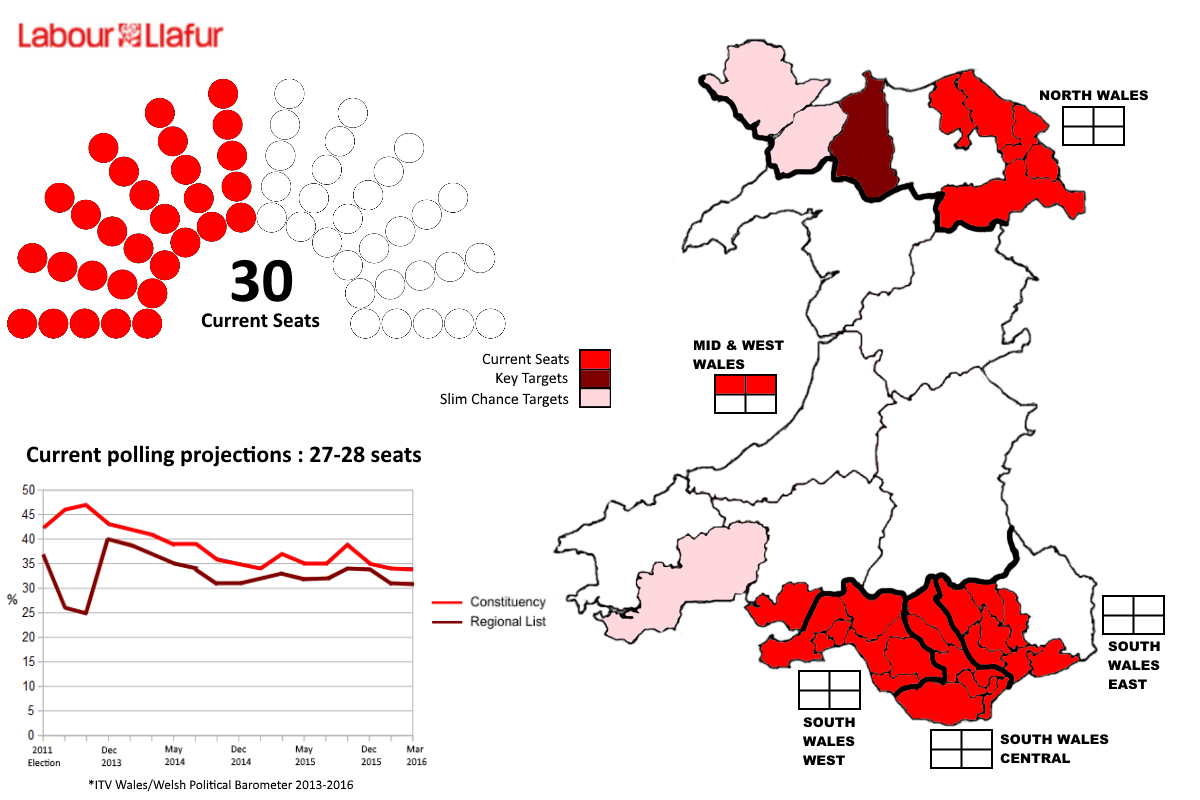 Labour have been on a clear downward trend for the best part of three years and all signs point to their performance being almost, but not quite, as bad as 2007 – which means they’ll only have 27-28 seats instead of 30. That might not sound dramatic, but in a 60-member chamber it makes a big difference and will determine whether Labour govern alone or in some sort of coalition (formal or informal). So for the moment it looks like it’s going to be a relatively poor election for Labour despite topping the polls – though there’s still a long way to go yet.

There’s very little room for Labour to manoeuvre in terms of target seats; it’s more about retaining what they’ve currently got – particularly Llanelli, Rhondda (both from Plaid Cymru) and one of the two list seats in Mid & West Wales.

Elsewhere, they’re likely to come under assault in Cardiff West, Caerphilly, Cynon Valley and Aberavon from Plaid Cymru but should have enough of a head start to hold them off. The Conservatives are also likely to attack Cardiff North, Vale of Glamorgan, Vale of Clwyd and Gower (possibly Bridgend too), while the Lib Dems will certainly want Cardiff Central. I’d expect at least one or two of those Tory and Lib Dem challenge seats to change hands.

You can see Aberconwy being their only realistic chance of taking a seat from another party, while they’ll fancy their chances in outlier seats like Arfon, Carmarthen West & South Pembrokeshire and possibly even Ynys Môn – though all of them are unlikely to produce results.

Keeping the damage to a minimum by retaining everything they currently hold and see the other parties lose seats to each other and UKIP.

That’s harder than it sounds due to the mathematics involved and the fact that in (geographically) large swathes of the country – outside south and north east Wales – Labour are also-rans. As said, only Aberconwy and maybe the odd list seat really stand out as seats outside Labour’s heartlands that they can realistically take.

27-29 seats will be the bare minimum expectation and should enable Labour to run a minority government due to the projected fractured nature of the opposition. Regardless, a result on a par with 2007 will probably put pressure on Carwyn Jones to step down as First Minister at some point in the next term (if he doesn’t do that anyway as his tenth anniversary in the job falls in 2019).

Anything less than 27 seats will certainly prompt a formal coalition, which Labour are always half-reluctant to enter into as it chips away at their perceived right to rule Wales as “The Establishment”. The nuclear scenario is that the opposition get the numbers to form a working “Rainbow Coalition” and remove them from office – but that’s unlikely this year, especially if UKIP win big and because of Plaid’s ideological resistance to working with the Conservatives.