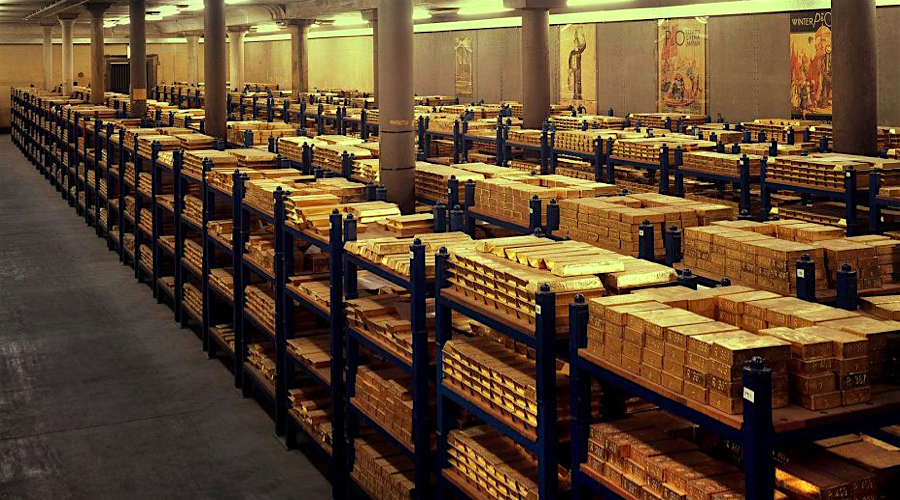 I’ve been banging on about how important economics is to arguments for and against Welsh independence – I’d like to point you to this Bella Gwalia article also – so the next logical step is trying to figure out how “rich” Wales is at the moment.

To start with, how do you define “how rich” a country is? Truth be told there are many different ways of doing so:

How does Wales measure up?

The 201 GERW report (pdf) estimated Wales raised ~£27.1billion in taxes during 2017-18. Disaggregated HMRC tax statistics said that in the same period Wales raised £19.6billion (when you include local taxes like council tax and business rates rises to around £21.5billion).

So already there’s a ~£5.6billion discrepancy between the two figures, but I’m inclined to believe the GERW report because the methodology is much stronger and uses multiple sources to fill in the blanks which weren’t included in the HMRC figures (like interest, dividends and climate change levies).

Based on the GERW estimate, Wales raises about £8,650-per-head in taxes. That’s a lot of money, it’s just a question as to whether it’s enough?

In terms of devolved government, the answer is “yes” – Wales raises more than enough in taxes to cover the costs of devolution and send a surplus (of up to £11billion) to the UK Treasury to cover UK-wide spending (see also: How is Wales funded?).

Would that ~£11billion surplus cover all of the expenses of independent Wales (defence, welfare, foreign affairs, criminal justice)? We don’t know, but I doubt the total cost of those things to Wales is anywhere close to the £24.7billion which is made up of the £11billion Welsh contribution to UK-wide spending and the £13.7billion estimated budget deficit.

Verdict: Hard to tell because there are no 100% accurate figures for Welsh tax revenues and there’s no idea of what an independent Welsh budget would look like. 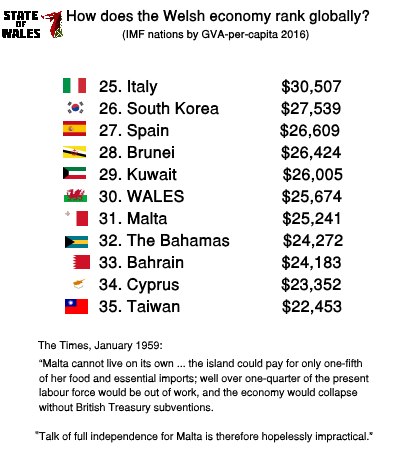 The main measure of how productive an economy is is Gross Value Added (GVA) which measures the total value of the goods and services produced by a nation + subsidies minus both direct and sales taxes.

The latest figures from the ONS, published on 18th December 2018 (link), say Welsh GVA was £62.2billion, or £19,899 per head in 2018 – making Wales the fastest-growing of the UK’s nations and second-fastest growing nation or region (out of 12) after London. Cardiff was also the fastest-growing city in the UK in 2016.

Nevertheless, the figures still place Wales at the bottom of the table, with GVA-per-head at 73% of the UK average. The Isle of Anglesey and Gwent Valleys also remained the bottom two performing sub-regions – though experiencing some considerable growth.

Globally, the picture is better with the 2016 GVA-per-head figures (£19,140 = $25,674) placing Wales 30th in the world based on the IMF’s 2016 listings. Though Wales would place a few places lower if all of the UK’s nations were counted independently, we’re toe-to-toe with one of the world’s pre-eminent manufacturing hubs (Taiwan), two former imperial powers (Spain & Italy) and a number of oil and gas-rich nations (Kuwait, Bahrain, Brunei).

We could do better with the right economic policies in place and independence may prove the catalyst as long as there’s a clear plan.

Verdict: The best way of looking at it is that Wales does poorly at a UK level, but globally we’re almost in the top tier of the world’s strongest economies.

Purchasing Power Parity (PPP) measures the purchasing power of a currency once inflation and cost of living are taken into account. Normally, the “home currency” is compared with the US dollar. For example, if an iPad sells for $1,000 in the United States and the UK had a PPP of 1 it would be priced at £1,000 in the UK.

There are no separate figures for Wales because we share a currency with the rest of the UK.

The news isn’t good. There’s been a sustained decline in the purchasing power of the pound since the 1970s. The fall in the pound’s value after the Brexit referendum vote and the fact inflation is exceeding real-terms wage growth has made matters worse.

Broadly-speaking, Wales has a lower cost of living than the UK average mainly because housing costs are cheaper; figures from 2010 (pdf) show that Wales was about 2.4% less expensive than the UK average. This figure might be even better if we had control over our energy and water supplies and more localised supply chains to reduce logistical costs.

Verdict: It’s hard to tell how various Welsh currency scenarios would affect Welsh PPP – but there are signs your money will currently go further in Wales than most of the UK; so you would probably feel “richer” in Wales with less money.

The latest figures I could find, from 2015 (pdf), shows Wales doing surprisingly well in terms of household wealth. Median household wealth in Wales – the value of everything a household owns, including pensions, property etc. – stood at £214,000.

Most of this is down to a proportionally higher increase in property prices, higher numbers of pensioners (with access to public and private pensions), large tracts of agricultural land owned by a few households and maybe this is a sign that the Welsh are quite happy to sit on what they’ve got instead of taking risky moves like playing the stock market, remortgaging or equity release.

Verdict: We’re doing better then you would’ve thought, but there remains an inequalities issue (a subject in its own right).

The main measure for this is Gross Disposable Household Income (GDHI). GDHI is all the money left to spend or save after taxes, pension contributions and property costs have been deducted.

The latest figures, from 2015 (pdf), show total GDHI in Wales was £50.6billion or an average of £16,341-per-head. This was 85.5% of the UK average, which itself is dragged upwards by London and SE England. Wales places 9th of the 12 nations and regions of the UK – a bit higher than our economic productivity would suggest.

Once London and SE England are excluded, Wales rises to 93.5% of the UK average. Take into account the slightly lower cost of living and Wales might be even higher than that – maybe around 95%.

There are, of course, major regional variations – Cardiff, Newport, all of north Wales, Powys and Monmouthshire have higher levels of disposable income than the Welsh average, while the Valleys have significantly lower than the Welsh and UK averages.

Income inequality in Wales is also broadly less than the rest of the UK, as a greater share of income comes from those earning at or below the UK average salary and we have a smaller proportion of top-earners.

Verdict: Wales comes out relatively well – better than you would expect – but there are regional problems and something of an east-west divide.

Absolute poverty is a global measure where people don’t have access to the basics to sustain life and/or live on less than $2 a day ($730 a year). The only people in Wales likely to experience this is a very small subsample of the homeless due to the existence of a welfare safety net which, if you only claim JSA, ensures your income is at least £10.44 a day.

The latest Welsh statistics (for 2015-16) showed 23% of Welsh households were in relative poverty – that’s household income at 60% or below the UK median average. This is the highest rate of the four Home Nations, but only slightly higher than England (22%) and actually lower than the West Midlands (24%) and London (27%).

The figure’s distorted slightly because the median Welsh household income is lower than the UK average (at £25,896) and is the lowest of the Home Nations (as mentioned earlier). If Welsh relative poverty figures were based on this, you would expect poverty levels to drop slightly because the poverty line changes.

Verdict: Could do a lot better, but statistical quirks make poverty in Wales out to be a bit worse than it perhaps is in reality. “Something needs to be done” though – an entire topic in its own right.

It’s a mixed picture, but there are some things we can scotch straight away.

Wales definitely isn’t “poor”. Factoring in household wealth, relative poverty levels, cost of living etc. means the average person won’t materially be any worse off living in Wales than any other part of the UK or western Europe even if they earned less here. Wales remains one of the wealthiest and economically productive countries in the world. It’s a bit like shopping at Waitrose instead of Harrods.

Can we do better? Definitely. There’s a productivity issue that’s just as much about demographics as it is about actual economic productivity in factories, offices etc. Pensioners, the long-term disabled and full-time students are economically inactive and Wales has a higher proportion of all of them resident here (a sizable chunk of the former being from England) which means our GVA is divided by a higher number of “non-productive” residents (though they may still be doing work that’s not counted in economics figures, like unpaid care).

Turning our graduate conveyer belt into something that produces serious economic results and not a brain drain is key to solving this problem, as is discouraging retirees from moving to Wales.

Lastly, could the situation improve with independence?

It’s hard to tell. The Flotilla Effect suggests it could or, more accurately, could have 30 years ago. There’s no reason why the structural problems that have dogged Wales since the 1970s couldn’t be solved under devolution nor the big challenges facing us in the future; but having all tools at the government’s disposal – financial regulation, infrastructure powers, research councils, monetary policy, social policy etc. – may go some way to solving those problems. 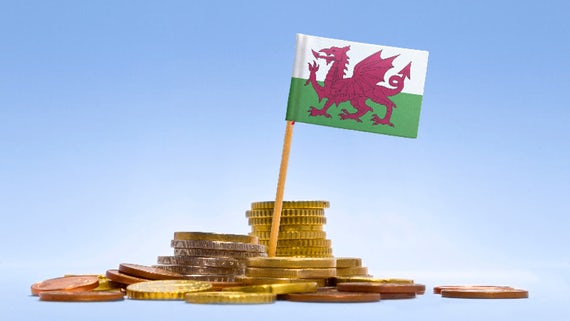 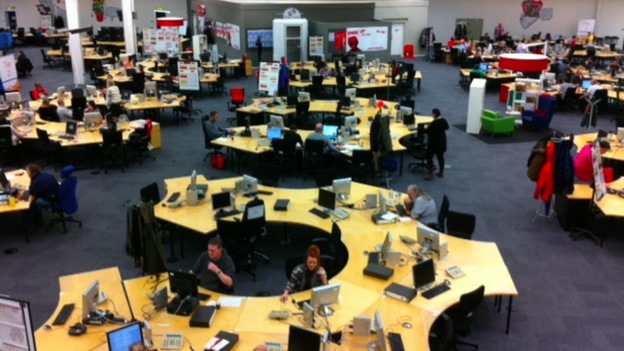