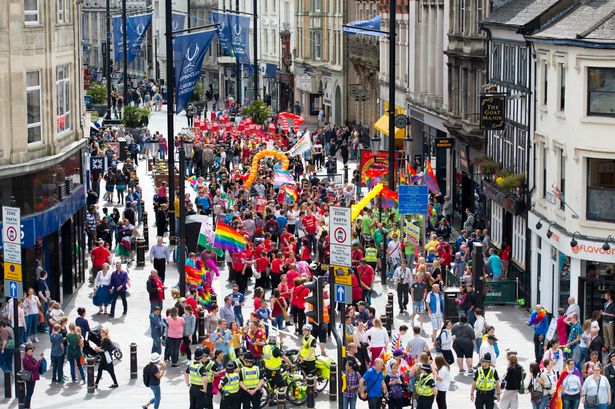 Throughout history these minority groups have enjoyed periods of relative acceptance (Ancient Greece, for example, was quite permissive when it came to homosexuality) combined with periods of suppression and even outright brutality – there are estimates that up to 10,000 homosexuals were killed in Nazi concentration camps.

Despite the fact there have been LGBT kings and queens (Edward II, James I/VI) – and LGBTs were broadly tolerated (when sexually inactive) for a long time – during the Victorian era there was a massive crackdown and homosexuality was punishable by death in EnglandandWales until 1861, after which homosexuality remained a criminal offence until 1967.

Sex is the biological and anatomical distinction between males, females and (in rare cases) intersex. Gender is the social, psychological and cultural manifestation of a person’s sex. A very small minority of people – transgenders – believe their sex is different to their gender (a women in a man’s body and vice versa) or don’t believe they have a gender at all despite their sex (non-binary).

As of today, and after decades of progress of rights for gays, lesbians and bisexuals, transgenders increasingly form the vanguard of the LGBT movement – particularly in the West; in southern Asia, “third genders” have had a place in society for centuries.

Homophobia and transphobia in Wales

According to ONS estimates (xls), in 2016 there were 26,000 homosexuals, 18,000 bisexuals and 10,000 “others” (presumably including asexuals, non-answers and transgenders) in Wales. In total, this represents 2.4% of the adult population. The under-35s are more likely than other age groups to identify as LGBT, as are white and mixed-race ethnicities. Men are also proportionally more likely to do so than women.

Every February, LGBT History Month is marked by the raising of the rainbow flag outside public buildings and earlier this year the National Assembly was named the best employer of LGBTs in the whole UK, not just Wales. Also in 2016, three openly-gay AMs were elected.

While those at the top floors of Welsh society may take to back-slapping each other, at ground floor there are still many issues that need to be addressed. “Poof” and its derivatives are still go-to insults, we’ve seen a UKIP AM call transgenders social deviants and the bullying and harassment of LGBTs – whether in school or not – is still a massive problem that’s arguably gotten worse over the last few years due to a backlash against so-called “snowflakes”.

LGBTs are also acknowledged by NHS Wales at being at higher risk of developing mental health problems “as a result of stigma, bullying or prejudice”. A research study in 2017 of over 3,000 gay, lesbian and bisexual young people found 45.2% had suicidal thoughts in the past year and 13.6% had attempted suicide. Separate research published by Stonewall found that almost half (48%) of trans people aged under 26 had attempted suicide.

Criminalisation in some parts of the world

LGBTs don’t have universal acceptance. While there’s little an independent Wales could do to directly affect that, it does place LGBTs and same-sex couples in danger if they did the wrong thing in the wrong place at the wrong time.

As of May 2016, 74 nation states and autonomous territories had laws criminalising homosexuality – mainly in Africa and Asia. Homosexuality is still punishable by death in Saudi Arabia, Iran, Yemen, Sudan, Somalia and Mauritania (as well as other sub-national states in Nigeria and Afghanistan), while LGBTs still face the possibility of life imprisonment in India, Pakistan, Bangladesh, Myanmar, Tanzania, Uganda – many of which are Commonwealth countries.

Civil rights; massive progress in a short space of time

The big one is same-sex marriage (2013), but there’s also been the decriminalisation of homosexuality (in EnglandandWales) in 1967, the election of the first openly gay MP in 1999, the equalisation of the age of consent for gay men in 2001, equal adoption rights in 2002, the repeal of Section 28 (which originally banned teaching about homosexuality in schools) in 2003, the creation of civil partnerships in 2004 and the Equality Act 2006 which banned discrimination based on sexuality.

People think social and other forms of progress is a steady diagonal line, when in fact there are periods when things go backwards – Section 28 was introduced in 1988 and was a backwards step in LGBT rights and acceptance, while the Soho bombing only happened 19 years ago.

Wales has played a big part in this. Homosexuality was decriminalised in the UK by a Welsh MP (Leo Abse). Gareth Thomas was one of the first elite professional male athletes in the world to come out as gay whilst still playing (and not long after Nigel Owens) and Lauren Harries was one of the first transgender media personalities at a time when there were very few if any. I’ve already mentioned MPs and AMs, but also in politics, Laura McAllister is one of Wales’ foremost experts, leading the recent review on Assembly reform.

Things have moved on to such an extent that you could argue that coming out – as a celebrity or public personality – isn’t that big a deal anymore. LGBTs, as a group, have arguably been overachievers in Welsh society compared to their proportion of the population. Part of that has been because of the bravery shown by high-profile personalities who’ve come out as well as the broad acceptance of it by the public.

There are always exceptions. Transgender and non-binary people arguably face a tougher time because their physical appearance marks them out (particularly pre-surgery). Coming out can also still be very daunting for young people – harking back to the bullying statistics mentioned earlier. Despite initiatives like rainbow laces, there’s still is a sense that homophobia amongst football supporters and within the industry is preventing gay footballers from coming out making football probably one of the last remaining bastions of old-school homophobia.

A big shift in public attitudes

According to the British Social Attitudes Survey, at the start of the 1980s, a majority of people (62%) thought same-sex relationships were either wholly wrong or partly wrong. This peaked during the height of the AIDS scare (1987-1990) at 75%. By 2012 this had fallen to 28% and a majority (57%) believed there was nothing wrong with same-sex relationships – a complete about-face in less than 30 years.

A poll for Sky News in 2015 found 48% of people surveyed had no moral objection to gender re-assignment (compared to 19% who did), with majority support amongst the under-35s (56%). In the 2016 British Social Attitudes Survey (pdf), 82% of people said they were not prejudiced against transgenders at all.

Even on hot-button issues such transgenders and toilets, the majority of women (72%) and men (64%) said they were either comfortable or quite comfortable with a transgender person using the toilet of their re-assigned gender.

A standardised school discipline system – As mentioned in the post on racism, a school discipline “points system” could be introduced where pupils receive points for offences including homophobic and transphobic abuse – the number of points depending on the severity with a threshold established for withdrawal of privileges, suspension or exclusion.

A nationwide confidential support system for LGBTs – We have similar systems in place for substance abuse (DAN 24/7 etc.) so it might be worth taking some of the good practices of employers such as the National Assembly across the country. This could include LGBT-specific counselling for mental health issues, dealing with coming out (particularly for young people), reporting and recording homophobic/transphobic abuse (as well as supporting victims), LGBT-tailored advice on sexual health and providing a virtual support network that small employers and the private sector might be unable to provide themselves.

A clear transitioning treatment pathway – The Welsh Government announced in August 2017 that they were establishing a network of transgender hospital services. My personal opinion is that transgenderism should be approached as a medical problem (not a social justice one), with a clear set of treatment steps starting in/just before puberty (where it’s clear a child is trans and wishes to transition) and ending with successful re-assignment surgery, after which a person’s gender can legally change; self-selecting gender without a doctor’s approval and without actually undergoing a transition is open to abuse and may trivialise what trans go through.

Should transpeople be able to use disabled facilities? – I put a question mark because it might be too controversial a suggestion, but when you think about it it makes sense. When people are actively transitioning gender, it could be classed as a disability due to the medical intervention required. This would give trans men and women the right to use disabled facilities (particularly toilets and changing areas) which are usually (but not always) gender neutral. Once they’ve fully transitioned they should be able to use the facilities of their re-assigned gender without problem as treatments have improved to such an extent that many post-op trans are indistinguishable in outward appearance from non-trans of the same gender.

LGBTs should be included in the Sex & Relationship curriculum before secondary school – (See also: Vice Nation – Sex VI: Sex Education) It’s why Section 28 was scrapped. This isn’t “promotion” but an acknowledgement that nobody chooses to be LGBT and, as a minority, they’re protected for a good reason. Building tolerance and understanding (some level of suspicion is natural to an extent) at as young an age as possible is essential to squeeze homophobic behaviour out of children before they’re old enough to do real damage to each other. Recently announced reforms to sex education in Wales makes it sound like this is going to happen anyway.

Anonymous/blind recruitment system for senior roles – This is going to feature in quite a few of these posts. In essence, when people apply for senior roles (particularly in the public sector, but perhaps also added as a condition for private companies to receive Welsh Government funding), all distinguishing characteristics (race, gender, disability) are anonymised in job applications so unconscious bias based on sexuality etc. is eliminated and the best candidates are shortlisted regardless. This system could be extended to other types such as university applications.

Using foreign policy to support universal LGBT rights – An independent Wales could refuse diplomatic courtesies (i.e. state visits), rethink trade ties and decline all but the most urgent emergency aid to nations that criminalise or actively discriminate against LGBTs. This wouldn’t extend to domestic policy issues like legalising same-sex marriage and could be restricted to human rights abuses and the active oppression of LGBTs.