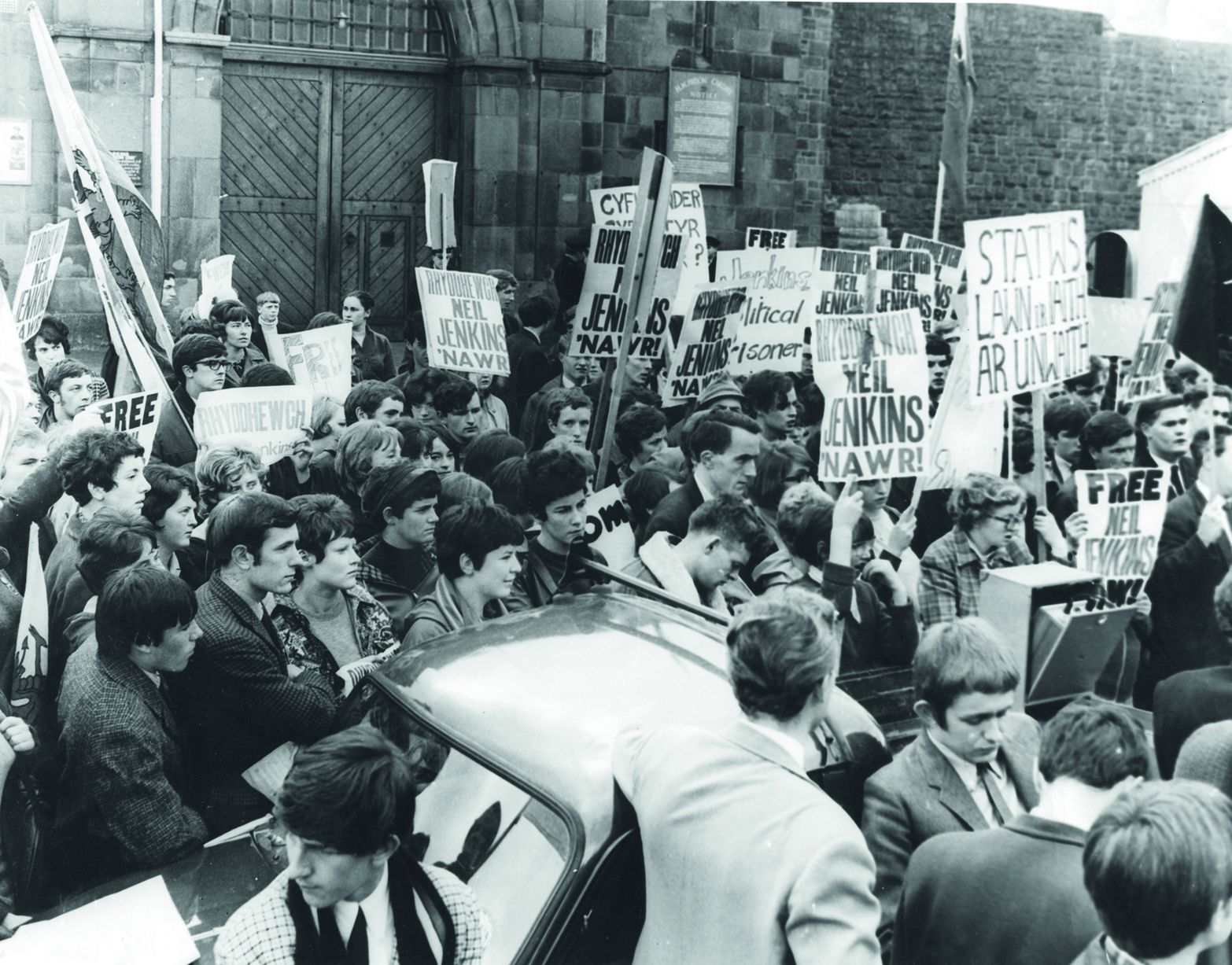 The struggle for Welsh-speakers rights

Until the 19th century, and for most of its history, Wales was predominantly Welsh-speaking, in spite of the language being effectively outlawed in public life under the Laws in Wales Acts (aka. “Act of Union”).

The language arguably only survived because of William Morgan’s translation of the Bible into Welsh in 1588 – sponsored by Elizabeth I to ensure Protestantism was taken up in Wales at a faster pace to prevent a Catholic uprising on England’s doorstep (a role that Ireland took up with devastating results for them).

When Wales began to industrialise, and people migrated from England and rural Wales to the south Wales coalfields, the Welsh language became more marginalised. In 1847, a Commission (of English appointees) reported that the Welsh were, as a people, lazy and immoral – blaming in equal parts the take-up of nonconformism (after receiving evidence from Anglican clergy) and the Welsh language (Welsh being routinely used in nonconformist services and Sunday schools); this became known as “The Treachery of the Blue Books”.

Instead of rejecting the findings, they were embraced. An unofficial policy was adopted where some (but not all) children who spoke Welsh in school had to wear a wooden block around their necks (“Welsh Not”) – a practice that reportedly didn’t completely die out until the 1930s-1940s. Between the 1911 and 1961 censuses, the proportion of the population of Wales who could speak Welsh dropped from 43.5% to 26%.

Saunders Lewis’s pessimistic Tynged i’r Iaith (Fate of the Language) radio address in 1962 acted as a rallying cry for direct action in support of the language. Not long after, Cymdeithas yr Iaith Gymraeg (Welsh Language Society) was founded and undertook a campaign which included protests such as defacing or removing English-only road signs, sit-ins, calling for investment in Welsh-language broadcasting and official recognition – some of which led to prison sentences.

They won a partial victory in 1967 with the passing of the first Welsh Language Act, which gave the language limited official recognition in public administration and allowed Welsh to be used in the courts for the first time in hundreds of years. Another Welsh Language Act was passed in 1993 which gave Welsh equal status to English in public life, but it wasn’t until 2011 when Welsh was granted official status in Wales.

Although there had been clear political progress, the 1991 census provided more grim news with just 18.5% of the Welsh population counting as Welsh-speaking – the lowest level on record.

Despite a recovery to 20.8% in the 2001 census, there was another decline to 19% in the 2011 census – offset somewhat by relatively high levels of pupils attending Welsh-medium primary schools and learning Welsh through the curriculum.

According to a technical analysis for the Welsh Government under its Cymraeg 2050 policy (pdf), the number of Welsh-speakers as a proportion of the total population of Wales is expected to remain relatively stable until 2049, rising from 562,000 people (19% of the population) at the time of the 2011 census to 670,000 people by 2049 (21%).

The key to this is education, with the proportion of people under the age of 16 who have at least some Welsh-speaking ability being relatively high – at around 40%. The analysis also suggests the majority of 15-year-olds will be able to speak some Welsh by 2031, which the trajectory suggests would lead to 1million Welsh-speakers by 2050 (31.3% of the estimated population at that time).

The media, commentators and members of the public can get away with saying things about the Welsh language and Welsh-speakers that they wouldn’t get away with if aimed at any other minority group.

Even so-called “liberal” bastions have an attitude towards Welsh; The Guardian’s hatchet job on Welsh-medium education in the summer of 2017 being a case in point and, more recently, Rod Liddle’s succinct and concentrated anti-Welsh bigotry in the supposedly respectable Sunday Times. He’s since promised to make a joke about the Welsh in every article from now on.

This seems to be at odds with public opinion towards the language (as I turn to later) and something of a sport for a vocal minority. The reason it riles people is, I suspect, because it harks back to the attitudes that led to The Blue Books and kickstarted what you could call an act of cultural genocide which the Welsh were encouraged unofficially and officially (particularly by the Anglican church) to carry out against themselves.

Then you have the tropes such as, “Everyone switched to speaking Welsh as soon as we walked through the door”, “there are no vowels/it’s a made up language”, ranging to outright contradictions – that Cymraeg is a way to enter a shadowy Welsh-speaking elite/crachach that opens up opportunities for social advancement, yet at the same time is “pointless and useless”. It can’t be both.

Use in public and everyday life

According to the Welsh Language Commissioner/Welsh Government survey covering 2013-15 (xls), Welsh-speakers who work in the private (29%) and third/voluntary sectors (25%) are less likely to speak Welsh with colleagues than those working in the public sector (35%). Using Welsh at work is also less common amongst the under-30s than the over-65s. The rates of people writing in Welsh at work are even lower (19% using written Welsh compared to 52% who don’t use written Welsh at all).

This is despite a majority of Welsh-speakers saying their employers supported the use of Welsh – though support was less forthcoming in the private and third sectors, where support was often limited to informal business. There have, of course, been high profile examples of businesses banning the use of Welsh by staff.

Fluency: Who counts as a “Welsh-speaker”?

There’s some ambiguity over what benchmarks a person needs to meet in order to be counted as “a Welsh-speaker”. Completing the equivalent of a GCSE Short Course is far too little to be considered fluent in the language, but should be enough for partial knowledge in written and spoken Welsh which might be enough for someone to count as a Welsh-speaker.

This presents a problem because while 84% of fluent Welsh-speakers use the language daily, it drops to just 20% or less for those who have limited knowledge.

That doesn’t matter if you want a language to survive, but to thrive it’s different.

Welsh finally being made an official language in Wales is perhaps the most important legal step made in centuries, when you consider that the goal of the British establishment has been for the language to be driven to extinction through natural attrition than active repression – much like Cornish. Although it hasn’t made much of a difference in terms of the numbers of people speaking Welsh, it’s an important symbolic milestone.

From the Welsh Language Commissioner’s survey, a majority of Welsh speakers (54%) said they have complete or partial success in using Welsh on official forms, with a further 44% saying they “sometimes” had success. So, when it comes to using Welsh in an official capacity the services are there and the number of cases going before the Welsh Language Tribunal each year are relatively small.

There are gaps of course – Welsh-speakers are likely to encounter problems using Welsh routinely outside Y Fro Gymraeg, community councils aren’t compelled to use Welsh in the same manner as county councils and Welsh language services aren’t always provided by every single public-facing company (only those deemed essential).

Welsh language culture is well-supported. S4C has an annual budget of around £74.5million – much higher than Scottish Gaelic BBC Alba and the Irish language TG4. It also has quite a broad reach both inside and outside Wales, particularly online. The often-quoted statistic is that for every £1 spent by S4C, £2 is generated for the Welsh economy and independent companies established to provide programming for S4C have since gone on to do the same in English – Rondo Media and Tinopolis coming to mind.

Although the range of Welsh language programming on commercial radio stations in Wales has come under some criticism, BBC Radio Cymru 1 & 2 caters well for a broad audience – despite declines in listening figures (part of a broader trend). Some £4.2million was spent in 2017-18 to support a number of Welsh language cultural, media and promotional activities – including the National Eisteddfod, which is perhaps unique in the world as a festival.

Initiatives like Hacio’r Iaith and Wicipedia are also digital-proofing the language.

Public attitudes to the language

People in Wales are overwhelmingly positive towards the Welsh language. According to a 2016 Cardiff University survey on prejudice in Wales, Welsh-speakers are one of the minority groups seen in a positive light with 64% of people having a favourable opinion and just 11% unfavourable; even amongst Anglophilic groups like UKIP and the Conservatives, hostility to Welsh-speakers was pretty low (albeit higher than the average).

A separate survey found that just 16% of people believed the Welsh language was a “nuisance” and a majority (53%) believed more should be done to preserve the language. It was only on a question worded with more militant language – that “extreme measures should be taken to protect the language” – that the public was more equally divided.

Maybe more people should put their mouth….where their mouth is (I suppose); if you support it, try it out. It’s safe to say that despite the chuntering in comment sections on news sites, in the real world, attitudes to Welsh are far more positive now than they were in the 19th Century when it was being called “evil” without irony.

Language policy in itself (WM education, broadcasting, adult learners) is best addressed separately and, as a devolved responsibility, is already discussed and debated in the Senedd every now and again. So I’m going to focus exclusively on equalities and civil rights issues here.

Broader rights, not micromanaging standards – I’m not a fan of the current Welsh Language Standards. There are simply too many of them (up to 200) and the levels of bureaucracy involved are excessive for public organisations. A sensible compromise would be a wider-ranging Charter of Rights for Welsh-speakers when using public services (with maybe 20 articles), which could eventually be worked into a Welsh Bill of Rights or Constitution. The future of the Welsh Language Commissioner is currently up in the air too as a new Welsh Language Act – which was under development but eventually dropped in 2019 – put the office on the chopping block.

Linguistically-motivated hate crimes? – Welsh-speakers are a minority and deserve the same protections as other minority groups, so should aggressive (stress aggressive) anti-Welsh language (or anti-English language, for that matter) sentiments be recorded as a hate crime or fall under the banner of racism? It would have to be carefully balanced with freedom of speech (a joke or satire shouldn’t count, for example), but there’s a big difference between arguing against the merits of Welsh-medium education (which can be dealt with rationally) and, for example, threatening or belittling someone because they’re speaking Welsh (or English).

Quotas for Welsh-speakers in public-facing roles (within Y Fro Gymraeg particularly) – Like race, this would be best dealt with proportionally; for example, there’s no point aiming for 20% of police officers in Gwent to be Welsh-speaking, but it might make sense in Dyfed-Powys or North Wales. The danger with quotas of any kind is that you end up with a box-ticking exercise that doesn’t result in hiring the best person for a particular job, but for some public-facing roles in essential services it perhaps would make sense for a small number to be ring-fenced for Welsh-speakers, or to have at least one Welsh-speaking member of a larger customer services team, for example.

A Chartermark for Welsh language services – The most powerful weapon Welsh-speakers possess is their wallet. Creating a national chartermark for private companies (who aren’t legally obliged to provide Welsh language services) based on their attitudes and use of the language, will inform Welsh-speakers (who often hold higher qualifications than English monoglots and therefore likely to be in higher social grades – pdf) where to spend their money and where not to.