Yesterday, a by-election was held in Newport West for the UK Parliament seat held by the late Labour MP, Paul Flynn.

There’s very little you can draw from by-elections like this, but I’m going to try to do so anyway. 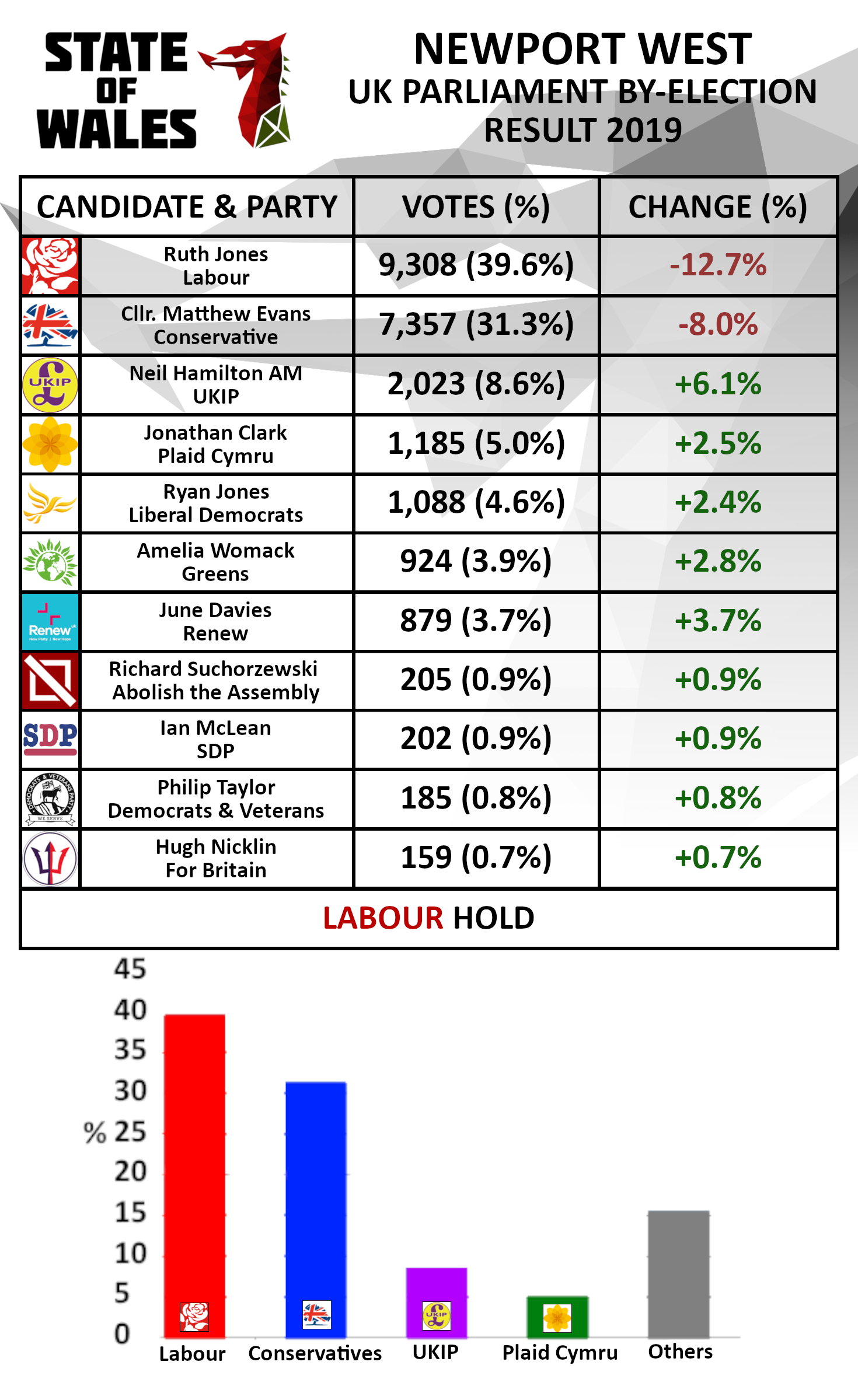 Arguably, the biggest story from this was the turnout. At just 37.1% (I laughably suggested something in the low 50s) it’s far from the lowest turnout record but it’s still poor by Westminster standards and is actually similar to turnout in Senedd elections, producing a similar result too.

The obvious reason was the weather, which was awful yesterday (even for Wales in April). This would’ve naturally suppressed turnout amongst older voters who in themselves are more likely to vote in the first place.

Also, for pretty much anyone who looked out the window or got back from work or shopping or whatever – having seen the UK constitution collapse in on itself in a Brexit shaped black hole over the last few weeks – would this by-election have really been high-stakes enough for them, and are MPs worth, getting drenched for? The answer is “No”.

Aside from the vote shares, there were no real shocks.

Labour won, as expected, despite a large drop in vote share. Paul Flynn had a very large personal vote and his popularity may well have lead to some Flynn voters (rather than Labour voters) staying at home. Ruth Jones will have to rebuild that trust. While the win was never in any real doubt, if Labour isn’t more relieved than pleased to have come out of this with a defendable majority then they’re fools. It begs the question: what would’ve happened if Change UK/Independent Group put up a candidate?

It was a fairly poor result for the Conservatives. There’s no evidence of the type of swing to them needed to re-take control of the House of Commons in any future General Election. Despite pushing hard in favour of the Newport bypass, there’s no doubt the ongoing political car crash in London will have perhaps been more at the forefront of people’s minds than a new road. Government parties rarely do well in by-elections, though this remains a fairly respectable share of the vote.

As said, you can’t read too much into this but if there are any messages coming out of this it’s for Mark Drakeford to speed up the bypass decision-making process, for Labour and the Tories to try and work out a Brexit deal and a UK General Election probably won’t solve the current mess.

I’m sure many of you saw the odds doing the rounds that UKIP would finish second, but it was essentially a sucker bet to draw in money on an otherwise predictable result. Second place sounds plausible enough to be true in a broader context but was never likely to happen. UKIP clearly hoovered up Leave voters from the Conservatives. While they’re back in the game they’re still nowhere near 2015 or 2016 levels of support and are still a minor bit player even less significant than the Lib Dems during their peak as “the third party”. This does, however, show that they’re likely to retain seats in the Senedd come 2021 as things stand. What would happen if they went up against Farage’s Brexit Party?

For Plaid Cymru, yes mathematically they doubled their vote share and narrowly retained their deposit (I assume) – which I said last time was their realistic aim – but I’m not here to flatter vanities. Plaid has a tendency to manufacture triumphs from very little. Based on the effort, time and resources that went into this they ought to be, not disappointed as such, but not overly pleased with themselves either.

What I will say is Plaid’s approach to this campaign was positive and spirited – which was refreshing to see. If they replicate that in more marginal constituency seats in the Senedd and at Westminster (Llanelli, Ynys Môn etc.) and on the 2021 regional lists it might produce results, but they need a completely new approach for seats in “British Wales” where their vote share remains in single figures.

It’s almost exactly the same story for the Lib Dems – who showed signs of a modest recovery – as well as the Greens; Amelia Womack would make an outstanding AM or MP, but while this was a good showing by Green standards, first-past-the-post is a killer for their ambitions.

Renew were the big surprise of the minnows. Coming from nowhere and with almost zero publicity to almost 4% of the vote is a pretty good effort. Was it the plane stunt?

As for the rest, there’s little to say other than they should be thanked for contributing to the costs of democracy, though I wouldn’t be crowing too much about Abolish the Assembly‘s abject failure; 2021 will be a different proposition and any vote for UKIP is also vote for London direct-rule.