Next Thursday (April 4th 2019), a by-election will be held for Newport West’s UK Parliament seat following the death of veteran Labour MP Paul Flynn on 17th February. He held the seat for almost 32 years.

Here’s a summary of the seat, the candidates and my own expectations.

For the most part, Newport West is a typically urban constituency with a young age profile, a high proportion of residents with a degree-level qualification, greater ethnic diversity compared to the rest of Wales and higher than average proportions of people claiming out-of-work benefits. It’s generally considered the wealthier of the two Newport constituencies, though any heavy industry (particularly steel) has long been replaced by white collar work.

The constituency includes the bulk of the city centre, most of the densely populated inner-city districts like Pill and Stow Hill, as well as the post-war housing estates of Bettws, Gaer, Malpas and Duffryn. These are primarily working and lower-middle-class areas – though districts like Rogerstone have expanded to house M4 commuters, while Allt-yr-yn is relatively well-to-do.

Despite being predominantly urban, the constituency also includes several rural and semi-rural areas such as the ancient village of Caerleon (located to the north), as well as Marshfield and Castleton (both located a few miles away from Cardiff’s eastern suburbs).

Newport West is home to some of south Wales’ most important public and private sector employers including EADS, gocompare.com, the Office of National Statistics, the Port of Newport, the Passport Office, the University of South Wales’ Newport campus and the Royal Gwent Hospital. A semiconductor cluster is being developed at the former LG plant as part of the Cardiff City Region, which underlines the area’s growing importance in high-tech manufacturing.

The constituency is also home to an infamous landmark – the Brynglas Tunnels – with an impending decision on whether to give a proposed bypass the go-ahead being front and centre of the campaign. This is somewhat ironic as MPs won’t have any say in it at all – it’ll be decided in the Senedd.

Other issues likely to come up include Brexit, the impact of welfare reform (as the constituency has a high number of households which will have been impacted by universal credit), the Kurdish hunger strike (Newport having a large Kurdish population), the future of the city centre (due to a large number of vacant shops) and a sharp increase in house prices caused by Bristol’s expanded commuter belt since the abolition of Severn crossing tolls in 2018.

At local government level, there are more Labour councillors serving wards in the constituency than Conservatives, with a few Independents thrown in.

By-elections tend to bring out the single issue types and various smaller parties of all descriptions, so there are a lot of candidates, listed in alphabetical order by party:

….I almost ran out of colours to represent them.

You’ll probably want a brief summing-up of some of the parties you won’t have heard of before.

Renew are a centrist pro-EU /pro-People’s Vote party with a number of environmentalist policies tagged on – pro-green, pro-free market. They currently don’t have any elected representatives in the UK, though there’ve been a few defections.

Anyone under the age of 40 (or otherwise unfamiliar with politics) is unlikely to have heard of the SDP (Social Democratic Party). To cut a long story short, they were a centrist group which split from a “hard-left” Labour in the 1980s (sound familiar?) and eventually merged with what was left of the old Liberal Party to become the Liberal Democrats. The SDP carried on largely in name only, though they had a councillor in Port Talbot for years if I remember correctly. They’re apparently a pro-Brexit party now.

Abolish the Assembly, For Britain and Democrats & Veterans are all UKIP splinter groups; they’re all pro-Brexit too.

Abolish the Assembly‘s aim is self-explanatory. For Britain are a minor far-right party that takes a hardline anti-Islam stance.

Democrats & Veterans are another hard-right party but of a more personal freedom persuasion (as long as it’s a conservative interpretation of personal freedom – no gays; hang ’em flog ’em, old white men should be allowed to do and say whatever they like etc.). They’re led by (infamous) former UKIP candidate from Penarth – John Rees-Evans – who can tell whether a donkey’s gay from ten paces. 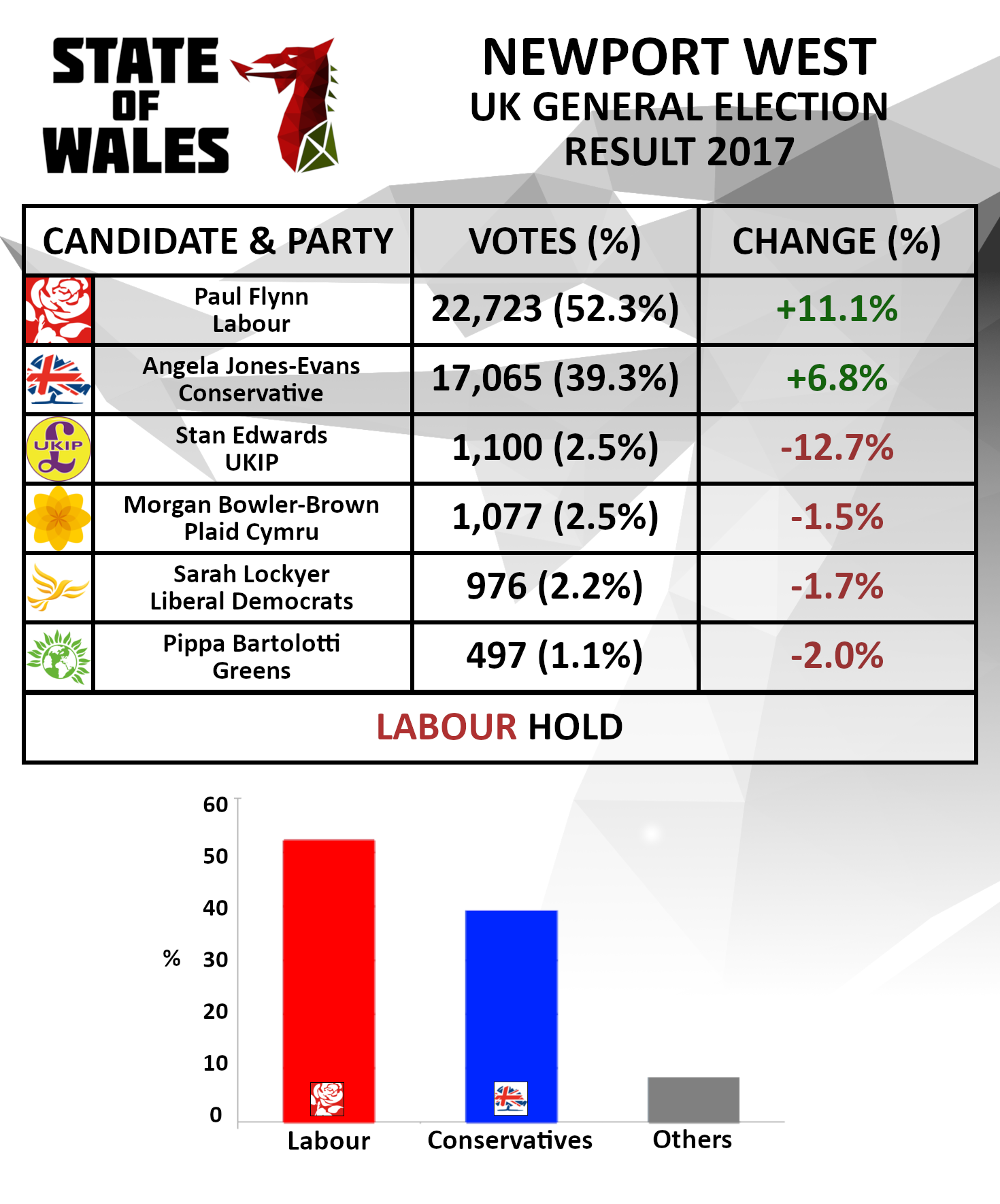 As said, Brexit-aside the Newport bypass is perhaps the main campaign issue. Plaid, Greens and Renew seem to either be against outright or in favour of alternatives (like the so-called “Blue Route”). The Tories, Labour, Lib Dems, UKIP and SDP are seemingly in favour.

It’s unclear what recent bad press for Labour and the incompetence of the Conservatives will do to voting figures or turnout – I’d be surprised if turnout was much higher than 50-55%.

On paper, this will be a comfortable Labour hold, though the Conservatives will be doing their damnedest to close the gap. Labour won’t want to lose a seat that was held for so long by Paul Flynn.

These are the sort of seats in which the Conservatives will need to demonstrate a big swing away from Labour (4-6%) in order to stand chance of regaining control of the UK Parliament (whenever the next UK General Election is called). They can point to improvements in the economy and the increase in house prices caused by the axing of the Severn crossing tolls (higher house prices in British politics being deemed to be a good thing), but their incompetence on Brexit and Theresa May’s instability threatens to overshadow this.

The Lib Dems have a presence on the city council, though they’ve never reached a double-figure number of councillors. Whether they’ll continue to suffer fallout from the Cleggocalypse and Vince Cable’s ineffective – and soon to end – leadership remains to be seen.

Plaid Cymru are keen to prove there aren’t any “no go areas”. This is the first major electoral test of Adam Price’s leadership off the back of some encouraging recent polls. They’re running a positive pro-Newport message, with AMs seemingly working in shifts to reach as many people as possible on the ground. If it goes well they should get third place, but history – and the fact Newport has never been Plaid-friendly – suggests retaining their deposit should be the realistic aim; anything extra’s a bonus.

It’s a similar story for the Greens, who might be boosted by putting forward a (relatively) high-profile Newportonian as their candidate and also standing a chance of galvanising local opposition to the bypass behind them “because they’re the Greens and hate new roads etc.”

The pro-Brexit and hard-right vote is likely to be split due to a large number of candidates, but I’d expect Abolish the Assembly to come out top in that fight (Neil Hamilton’s a vote loser for UKIP), probably retaining their deposit or coming very close to doing so and maybe competing for third or fourth place – which will lead to a whole lot of hand-wringing in Cardiff Bay.

The next update will be an analysis of the result on April 5th.