With a week to go until the UK parliamentary by-election for Brecon & Radnorshire (on August 1st 2019), it’s time for a preview.

The by-election is happening in unusual circumstances. Firstly, the campaign has taken place with a UK Conservative leadership election as the backdrop (Boris Johnson emerging the winner) – the Lib Dem leadership election also being important in the context of this seat. While, secondly, it was triggered by a recall.

In 2015, a law was passed so that MPs who were were found guilty of a criminal offence which warrants a suspension from the House of Commons can be effectively “sacked” and forced into a by-election if 10% of registered electors in that MP’s constituency sign a petition.

In February 2019, the incumbent MP, Chris Davies, was charged with expenses fraud. He pleaded guilty and was sentenced to community service and fined £1,500. This triggered the recall petition and on 21st June 2019, it was announced that 10,005 registered electors had signed it (19% of the total electorate) triggering the by-election itself.

Brecon & Radnorshire is the largest constituency in Wales by land area, covering the southern two-thirds of Powys. It’s one of the most sparsely populated constituencies as well, with a population of around 70,000 spread over an area bigger than Greater London.

While the constituency is predominantly rural and dominated by the Brecon Beacons National Park and large swathes of the “Welsh desert”, the area around Ystradgynlais is a former coal-mining area which is part of the traditional south Wales Valleys, while Brecon is an important garrison and market town. Diffused small market towns surrounded by upland farms is probably the best description of the constituency. Despite the sparsity, it hosts some of Wales’ most important cultural events including the Royal Welsh Show and the Hay Festival.

However nice that sounds, the constituency does face issues typical of a rural constituency of its size, such as poor internet connectivity, poor transport connectivity and a general distance from public services. This is compounded by it having one of the highest proportions of residents aged 65+ (26.6%) – beaten only by Dwyfor Meirionnydd.

The area has some of the highest numbers of people working in primary industries like farming, so Brexit is likely to feature quite highly in the campaign. Another issue that’s likely to have been higher up the agenda than usual is onshore wind, with renewables equally seen as a blessing and a curse for Powys – one wind farm in particular near Llandegley (Hendy Wind Farm) having proven locally controversial. Traditionally, people in the constituency (particularly the northern half) have been reliant on acute hospital services at Hereford, and the proximity to the border means that there are a high proportion of people born in England – but it also has a perhaps higher than expected proportion of residents who can speak Welsh (15.9%).

The candidates are listed in alphabetical order by party; incumbent in italics: 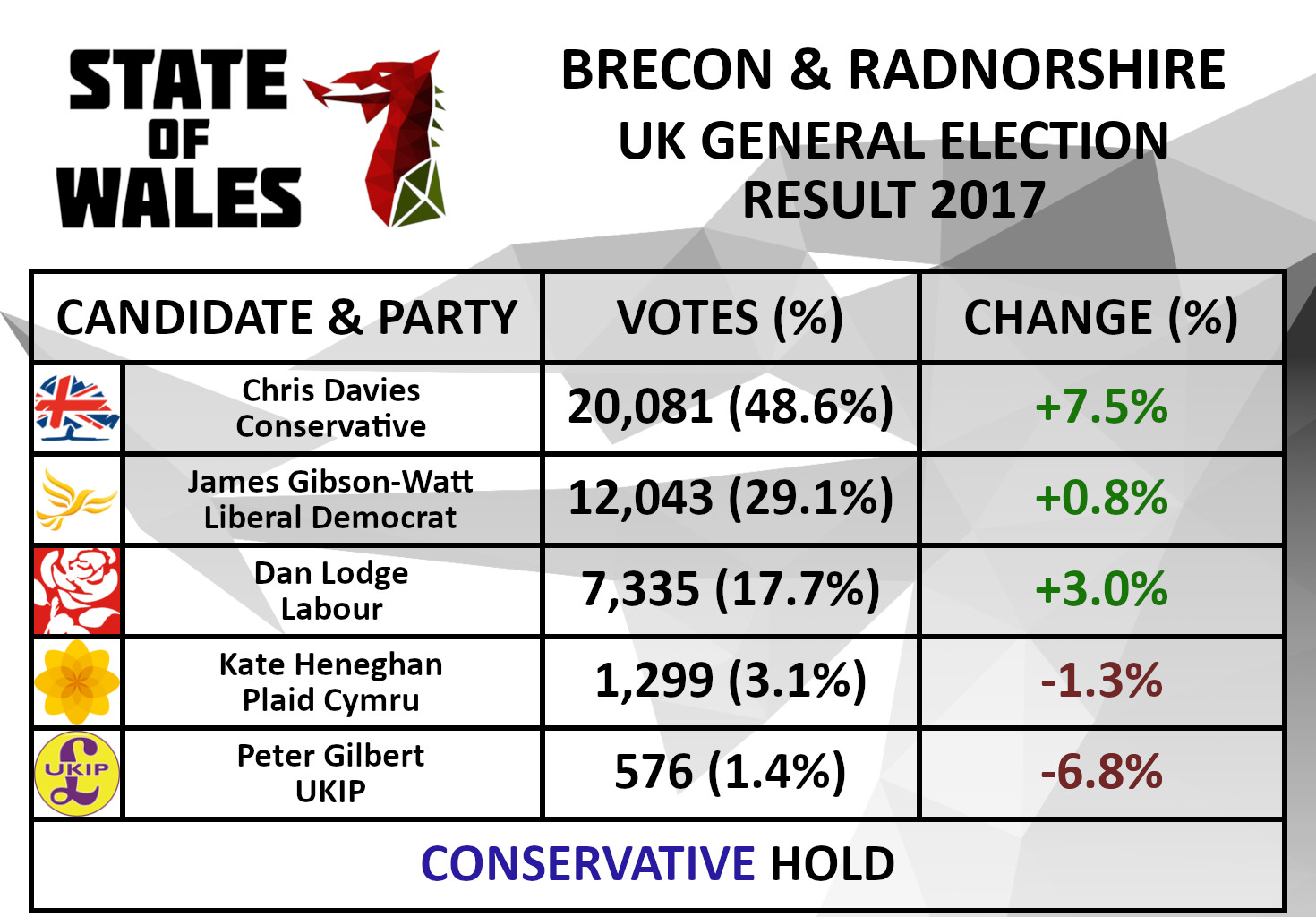 There’s only been one other election held under a recall petition (the Peterborough by-election earlier this year) and that resulted in the incumbent party (Labour) retaining their seat – albeit with a large drop in their vote share.

The seat has been a Conservative-Lib Dem marginal (or there abouts) for the last 40-50 years. Although the Tories have tightened their grip on the seat since 2015, this by-election presents the Lib Dems with a perfectly-timed opportunity to re-take the seat.

I don’t think it’s in the bag though as it depends on how well Chris Davies’ personal vote holds up and how well the Brexit Party do. On paper, as the Tories and BXP are fighting largely on the same turf, they could split each other’s vote and allow the Lib Dems to come through the middle to win comfortably, which is why the Lib Dems are perhaps the front-runners.

One of the big talking points so far has been the decision of Plaid Cymru and the Greens not to stand candidates as part of an informal “Remain Pact”. While neither of the parties has ever performed particularly well in this seat, the 6-7% of the vote it could (but not necessarily would) give the Lib Dems might prove vital.

On balance, it was the right decision by both parties. As I said in the aftermath of the European elections, there’s no point splitting votes when Brexit (and which side of that two-sided argument you’re on) remains the biggest issue in town at the moment. Although, in my opinion, Brexit is now inevitable in some form and can’t be stopped, an extra Remain MP against a minority Tory government is essential for those campaigning for a second referendum – so the stakes are quite high.

You can certainly argue, and argue well, that as the national party of Wales, Plaid should’ve put up a paper candidate. However, seeing as they want to give the impression of forward momentum, what would another lacklustre performance like Newport West achieve? Maybe this will backfire when the Lib Dems – with their long history of fighting dirty – inevitably decide not to reciprocate in the future (Aberconwy or Llanelli, for instance – I don’t think they’d ever do it in Ceredigion), but at least Adam Price can take the moral high ground, however lonely it often is when you’re up there.

Chris Davies is very firmly on the Leave side of the Tory party, so in the same manner as Plaid and the Greens stepping aside for the Lib Dems to form a united front, it probably would’ve been smart for the Brexit Party to do the same. They didn’t.

The circumstances are, of course, different due to the reason for the by-election. You actually have to go in person to specific venues to sign a recall petition and the fact the rate of signatures was so high suggests the public might not be happy having an expenses fiddler represent them, no matter how minor the offence. Meanwhile, the Brexit Party are the protest party of protest parties.

The seat also used to be a Labour stronghold, with the party holding it for 40 years between 1939-1979 and remaining competitive until as recently as the mid-1990s. However, the fortunes of Labour have declined to such an extent they’re usually nothing more than a good third place, struggling to get more than 20% of the vote.

For UKIP, retaining their deposit would be a good showing as it was in Newport West, while the Monster Raving Loony Party have never retained a deposit.

There have been suggestions it could be close between the two for the wooden spoon, so if any nationalists, Greens or Remainers can’t stomach lending the Lib Dems their vote, it might be worth considering voting tactically for Lady Lily the Pink.