Now that the dust has settled, it’s time to take a close look at the EU Parliament election results and come up with some wild and baseless commentary off the back of a crap turnout and the implosion of UK politics.

The EU Election in the UK 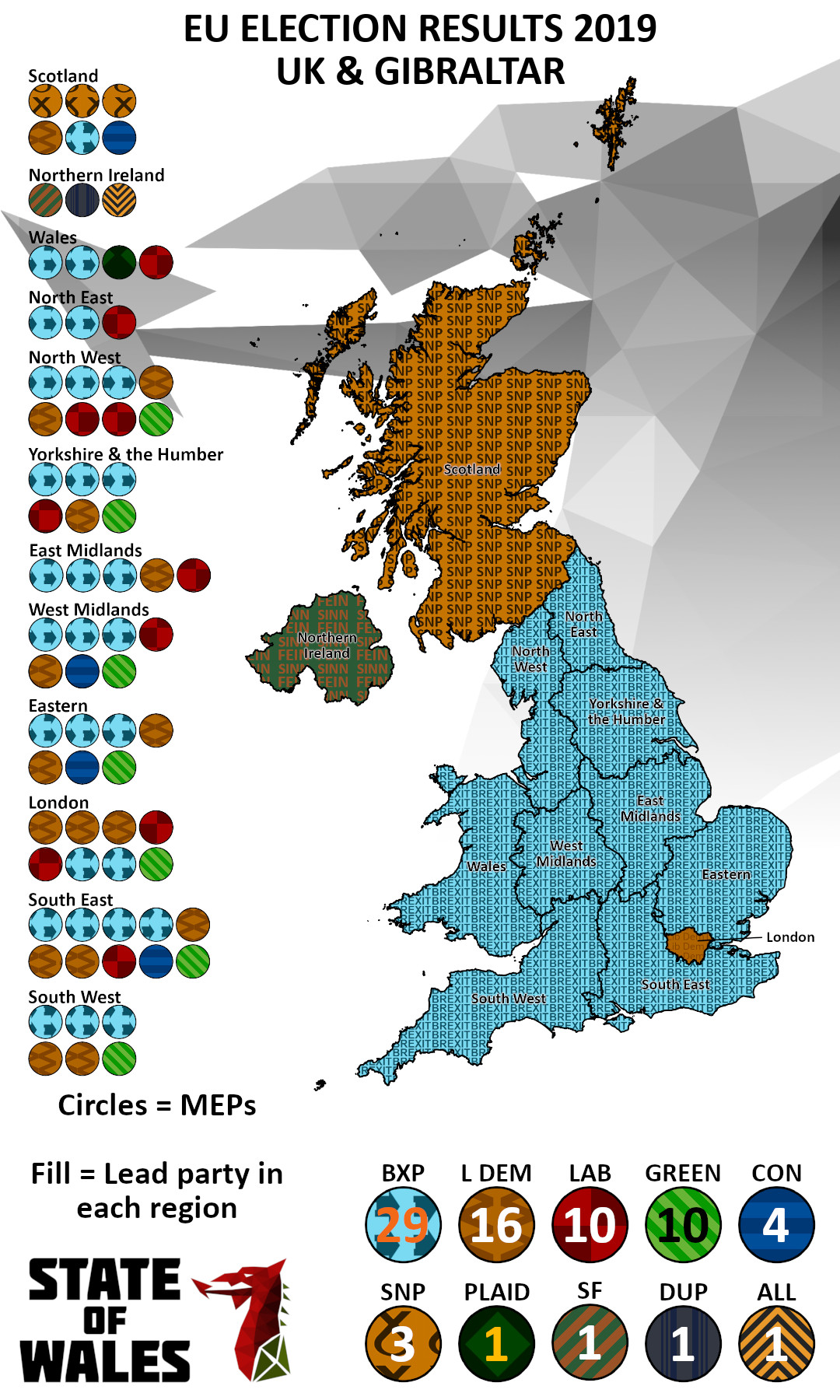 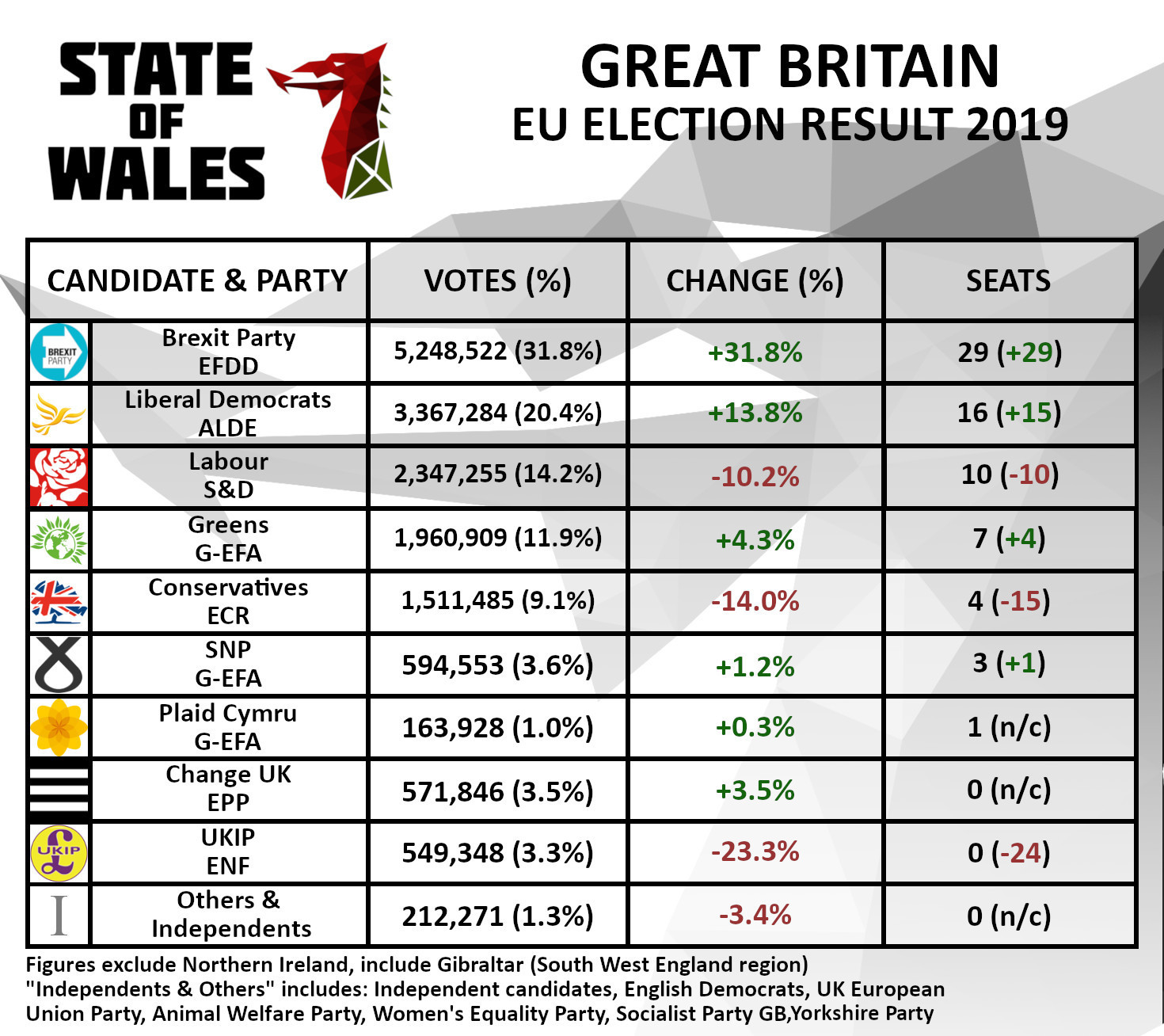 The EU Election in Wales 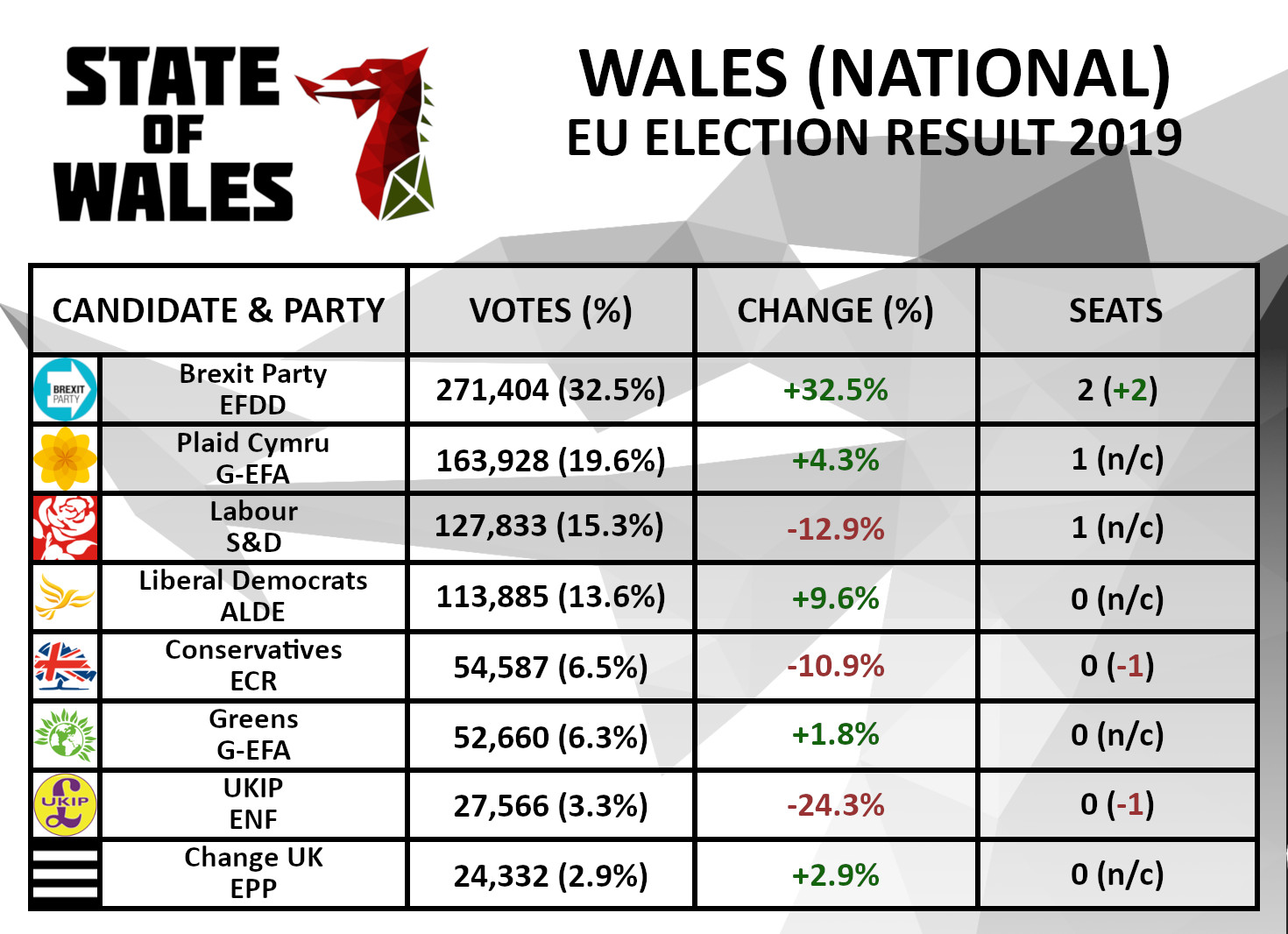 In terms of the raw figures, this was a historic election in Wales with Labour failing to win a national election for only the second time in more than 100 years (the last time being the 2009 European election).

So why aren’t I very animated about that? The European election has a completely different dynamic to other elections as it’s wholly proportional, better lending itself to protest votes. We all knew Labour and the Tories were going to do badly and the Brexit Party and Plaid do well – but in the grand scheme of things, this isn’t even a trend yet and it’ll take a couple of more polls to determine that for sure.

As said, there were no real surprises as the Brexit Party took the top spot and two seats. It’s largely a transfer from UKIP and the Conservatives, both of whom paid the price for either not campaigning at all in the case of the Tories or putting clowns front and centre of the campaign in the case of UKIP. I said previously that Farage has always been bigger than UKIP and this is his vehicle.

It would be naive to assume that the Brexit Party will “go away”, as I suspect that once Brexit is out of the way, Nigel “absolutely-not-an-overprivileged-career-politician” Farage will want to turn the party into a broader-based anti-establishment populist movement similar to the Five-Star Movement in Italy – which is now in government there. Putting the crap turnout and electoral system to one side for a moment, the parties in the Senedd need to wake up to this immediately. The first step is to not help turn them into martyrs dying on a hill for a fictional cause.

Plaid Cymru probably has the most to be pleased about from the Remain parties in Wales, but as is always the case with Plaid, there’s no reason to get too carried away. Their vote held up in Y Fro Gymraeg and they secured a number of strong second and third places in areas outside of their traditional heartlands – probably because they actually seemed to take the election seriously and planted their flag firmly in the Remain camp. They ought to be slightly disappointed that Labour managed to finish ahead of them in places like Neath Port Talbot, Caerphilly and Blaenau Gwent – which contain constituencies amongst Plaid’s target list in 2021. What will probably be more important to them is beating Labour quite convincingly into third place nationally, which is a massive psychological boost and something they can point to and say, “Labour can be beaten”.

Labour will be breathing a sigh of relief that they held on to their seat. They probably won’t care too much as they can always say “it’s not a general election”, but this does suggest that some of the dire polling predicting a fall to ~20 seats in Cardiff Bay has an element of truth to it as things stand. The blame for this lies squarely at the leadership – in Wales and London. Labour is going to have to get off the fence one way or another on Brexit because once people get into a habit of not voting for them it’ll stick. For Mark Drakeford to simply follow London’s lead on this isn’t good enough anymore and I suspect when the Senedd reconvenes next week, Adam Price is going to go to town.

The Lib Dems made a strong comeback, building upon recent good local election results in England – which suggests this is more than just a trend. The danger is that they fall into the trap of being seen as a left protest vote again. As predicted, the fact the Remain parties didn’t stand a joint list has hurt all of them – if they had, there’s a good chance they would’ve come out on top in Wales and won two clear pro-Remain/People’s Vote seats. The Lib Dems need to learn to be humble and work with others instead of the sneering “We know best” arrogance that split the Remain Vote.

This is probably the best performance by the Greens in a national-level election in Wales as far as I know. Recent polls suggest they could – at long last – be on the verge of challenging for regional list seats in the Senedd and based on this there’s an element of truth to it. But you also have to take into account the turnout and motivations for people voting; for that reason they should probably keep their expectations in check and they didn’t do anywhere near as well as their counterparts in England and Scotland.

There’s nothing positive the Tories can take from this. Like Labour, they can say “low turnout; it’s not a general election” and when it comes down to big issues people will vote differently – the Tories topped the EU poll once too. But because of their own bungling, Brexit has become the only issue in town. Another few wasted weeks on a leadership election is just going to cause more uncertainty and the wrong choice of a successor to Theresa May could very well leave lasting damage.

Change UK didn’t do anything, as expected – they just took 3% of the vote away from the other Remain parties. UKIP are swirling around the plughole of history, getting caught in hair shaven off an incel neckbeard’s back, but Wales was far from their worst performing area, possibly because they have a presence in the Senedd.

I’m not the only person who said this election would be used as a proxy referendum on Brexit and almost as soon as the results were announced, both sides pounced on them as supporting their own worldview.

Look into the results at a Wales level though and it’s nowhere near as clear cut as that – and it’s probably the same the English regions outside London.

First of all, the aggregate vote of the unquestioned pro-Remain/second referendum parties, versus the parties who unquestionably want to leave the EU without a deal – in effect, everyone except Labour and the Conservatives. 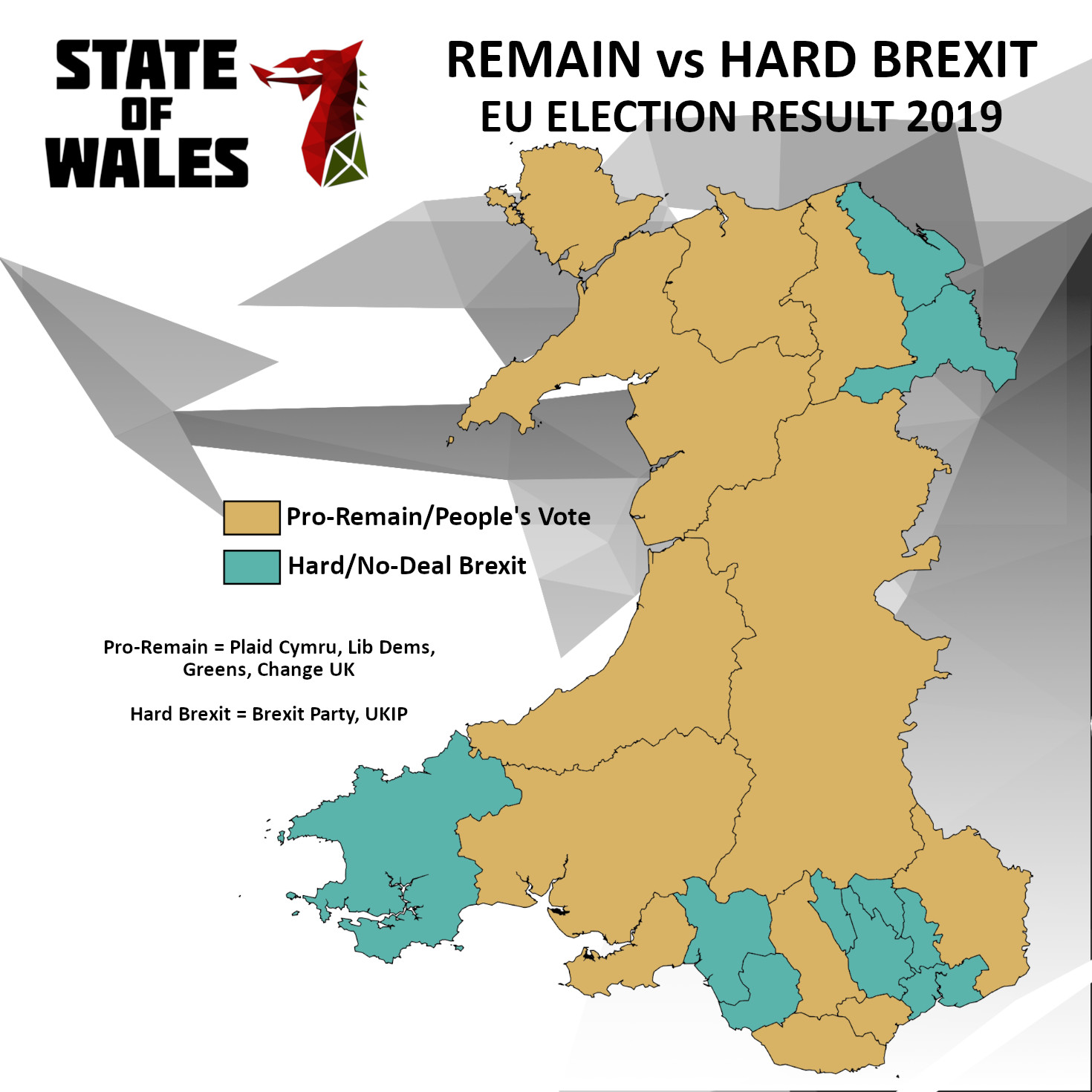 On this measure, Wales shifts towards Remain. The parties which support Remaining in the EU or a second referendum get 42.4% of the vote compared to the 35.8% who back a No Deal Brexit. The simplistic conclusion from this would be that Wales has changed its mind and would vote Remain, but that’s not the case at all. All this suggests is that given a choice, Wales might prefer to stay in the EU over leaving without a deal.

But there is a deal on the table…. 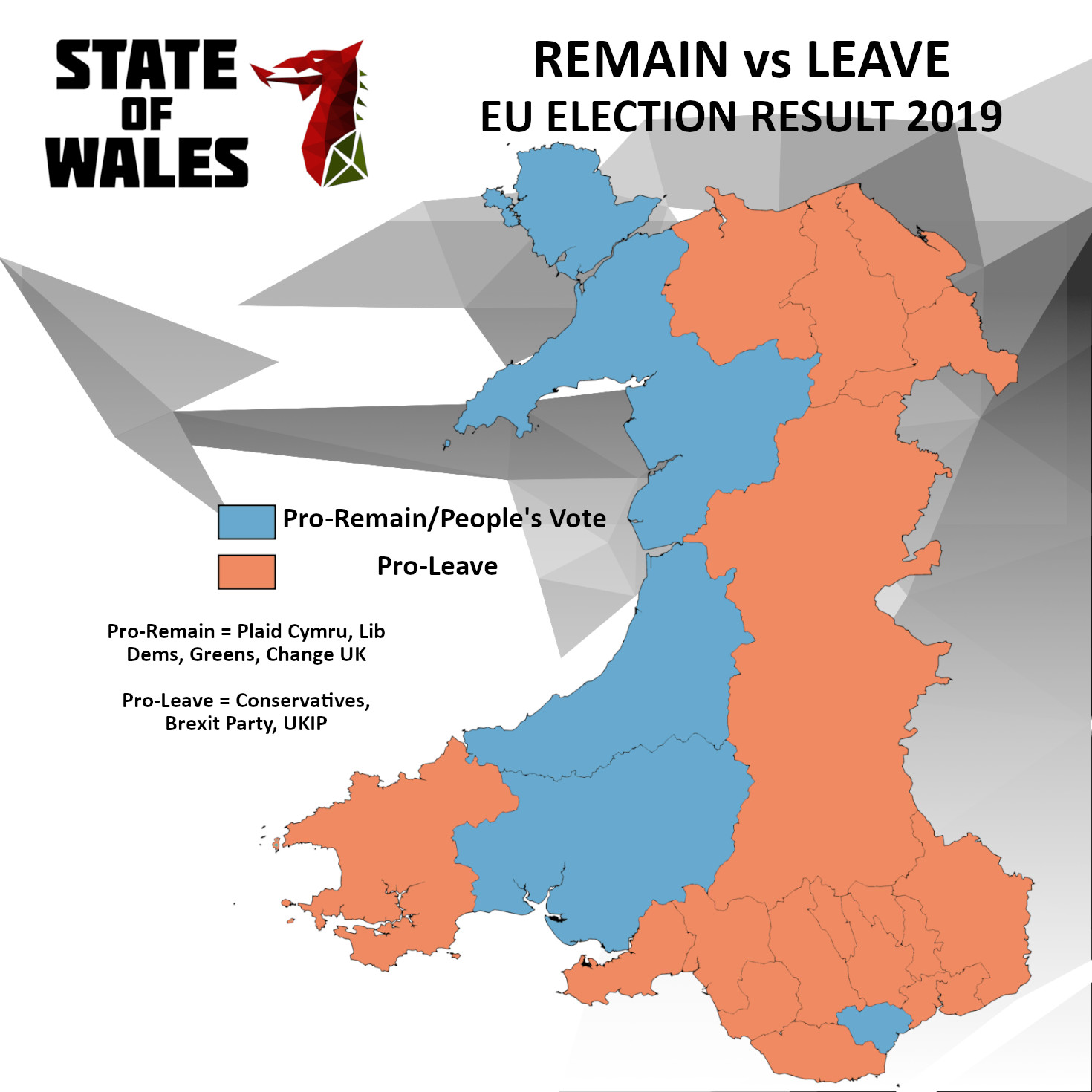 If you add the Conservatives – who at the moment back Leave with a deal – to the pro-Leave parties, then the picture changes quite dramatically in terms of which group tops the poll in each local authority; pro-Leave parties come out on top in nearly all of Wales. They even manage to nominally flip some councils which voted Remain in 2016 over to Leave (Monmouthshire, Vale of Glamorgan), while a few go in the other direction (Ynys Môn, Carmarthenshire).

However, despite all this, on national vote share, the Remain parties come out on top – based on these results – by just 0.1% (42.4% vs 42.3%). If there had been a single Remain ticket, the narrative today would be very, very different – but they blew it because they couldn’t put their differences aside.

The Lib Dems and Change UK are hipsters sneering at each other across the vintage store, both taking a, “We were Remain before it was cool and nobody else is allowed” approach. They don’t want to win, they want to be proven right, meaning – in the spirit of the Lib Dem’s new found candour –  both of them are acting like a bunch of wankers.

While Plaid realise the maths of the situation (mainly because it favours them), they’ve seen votes in it for themselves in other elections and are acting as though the Brexit agreement with the Welsh Government and their lukewarm campaigning for Remain didn’t happen. Meanwhile, the Greens are just going to mess everything up by taking X% away from the lead Remain parties for absolutely no reason.

If this was really about putting Remain or a second referendum on the agenda, the parties should’ve been able to put their political differences aside for the good of the cause. They haven’t and they’re going to pay the price for that in the form of Farage’s rictus grin on May 27th and a fresh push for “No Deal”. Congratulations. *slow hand clap*

So you could say that Wales is split down the middle, with the fence-sitters in Labour determining whether Wales would fall one way or the other in any hypothetical second referendum – and based on where the Leave parties’ share of the vote is strongest, I don’t think much has changed at all and Wales would probably still vote Leave.

The take-home message is: be very, very careful in interpreting these results – it’s not an overwhelming endorsement for either Remain/second referendum or a Farage-inspired Brexit. Nothing’s changed.

The EU Election & the EU

Although in raw figures the story is one of a rise in the far-right, it’s actually not that simple as the ENF group was formed prior to this election. On those terms, they only gained 22 seats – which isn’t particularly impressive – while their more populist EFDD cousins only gained seats due, in large, to the performance of the Brexit Party.

In many places, including Spain, Denmark, the Netherlands and Germany, populist and far-right parties were successfully curbed or under-performed. The Brexit Party’s success in the UK aside, the biggest exceptions seems to be France, where the National Rally (formerly Front National) finished in first place, as well as Italy, where the Lega Nord finished first. In Belgium, the far-right Flemish nationalists Vlaams Belang finished second.

So perhaps the real story here is the performance of the centrist ALDE group, reflecting the strong performance of the Lib Dems in the UK and breaking the duopoly of the dominant EPP and S&D groups. This means there’ll need to be a lot of horse trading to secure nominees for various EU Commission and Parliament positions – though the EPP’s Manfred Weber remains favourite to take over from Jean-Claude Juncker.