The third (often considered to be the weakest) branch of government in most constitutions is the judiciary.

At the moment, most aspects of the judiciary are non-devolved and are run on an EnglandandWales basis – calling back to the Laws in Wales Acts (Part II).

There’ll be a more detailed look into this if/when I return to criminal justice in the future. So to whet your appetites for that (I’m sure you can’t wait), I’m only going to look at the judiciary in the specific context of the constitution; I won’t be considering things like the legal system (common law vs civil law etc.), prison system, probation, policing or anything like that. 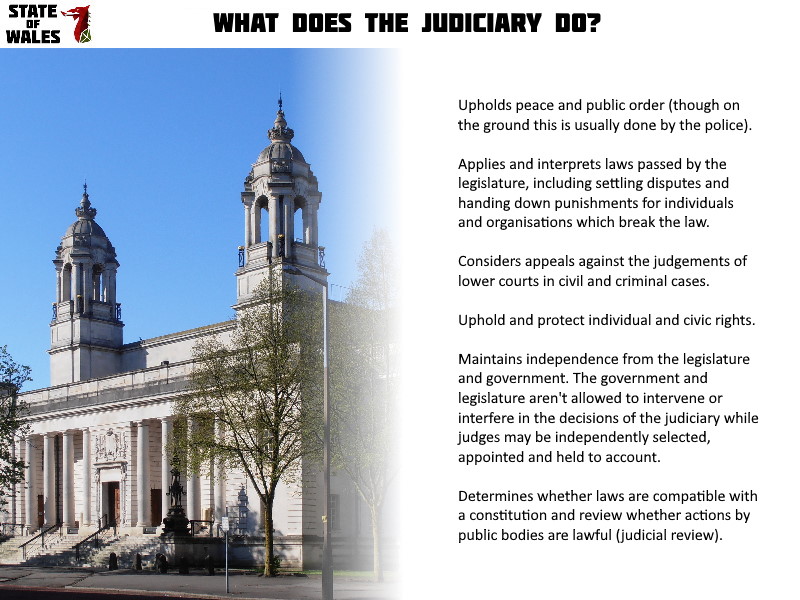 The role of the judiciary in UK politics isn’t laid down in a single text, though laws such as the Constitutional Reform Act 2005 have legislated for the creation of a UK Supreme Court.

The Act placed a duty on the UK Government to protect the judiciary’s independence whilst removing the right of certain senior judges (previously known as the Law Lords) from sitting in the House of Lords.

Wales, of course, “shares” a legal jurisdiction and administration of justice with England despite being able to draft and pass our own laws. Some elements of the judiciary are devolved – such as tribunals in devolved policy areas including agriculture, mental health, the Welsh language and special educational needs.

The Thomas Commission – which reported back towards the end of 2019 – recommended the devolution of justice and proposed some changes to the court system in Wales, though it’s highly unlikely anything will happen on that front for the foreseeable future due to entrenched opposition from the Conservatives.

It could well be the case that Wales would only get its own legal jurisdiction and control over the administration of justice through independence.

What clauses relating to the judiciary may need to be included in a constitution?

1. Selection, appointment and duties of an Attorney General

The Attorney General is the senior legal adviser to the head of state and government (in EnglandandWales). The equivalent role in the Senedd at present is the Counsel General.

In terms of independence (or devolution of criminal justice) they would be politically responsible for the public prosecutor (presently the Crown Prosecution Service), provide legal advice on new laws and would be able to make interventions on behalf of the government on points of law (i.e. overly-lenient sentences). Due to the judicial nature of the role, it would require a formal appointments process by the Senedd as a whole similar to that of the Prime Minister and Llywydd.

The Supreme Court would be the appeal court of last resort in criminal and civil cases as well as acting as a constitutional court. The Constitution would need to include the Supreme Court’s overall set-up,  role and functions, the number of Chief Justices, their appointments process and tenure. Chief Justices could be subject to a confirmation hearing in the Senedd (or an upper chamber).

This would be a move away from political control over the constitution under the Westminster System (parliamentary sovereignty – Part II) – where MPs decide on constitutional changes – to legal control. That means the constitution would be the unquestioned highest law in the land and introduce a more marked separation of powers (Part VII). It would also prevent the constitution being used as a weapon for political reasons (i.e. South Africa under apartheid, Nazi Germany), though we could lose some flexibility.

3. Structure of the appeal courts, circuit courts and tribunal system below the Supreme Court

The Welsh Government and Senedd would probably need some flexibility in terms of the number of courts and their respective jurisdictions/circuits. At a bare minimum, there would need to be a constitutionally-mandated Court of Appeal (Criminal and Civil) and a High Court (which could include a Commercial/Chancery Division to deal with things like insolvency, estates and land law).

The number of Circuit/Crown Courts, District/Magistrates Courts (Criminal, Civil, Coroner, County, Small Claims & Family Courts) and tribunals could be decided in law rather than in the constitution. All the constitution would need to do is to state that they need to exist in some form.

Similarly to elected representatives (Part Vb), for judges the constitution could include the qualification criteria (such as a constitutional requirement for judges to have been a barrister or solicitor before their appointment – though this may not apply to magistrates if we decided to keep them), disqualification criteria and terms of office (possibly including a mandatory retirement age). The appointments process would need to be independent of both the government and the Senedd – probably via a continuation of the Judicial Appointments Commission or a nominating commission within a Welsh bar association.

This is more a rights issue than a judicial one and will be looked at in more detail in Part IX and Part X. The constitution could determine which trials require a jury.