While policy is largely shaped and enacted by that we choose at the ballot box, constitutions often lay the ground rules for the circumstances under which political power can be used as well as how decision-makers are held to account themselves.

Separation of Powers and Checks & Balances

In most nations, the legislative (parliament/law-makers), executive (government, civil service etc.) and the judicial (courts/judge) branches of government are kept apart constitutionally to keep each other in check and limit each other’s powers – known as “separation of powers” and “checks and balances” respectively.

In the Westminster System (Part II), the executive and legislative branches are partially merged (the judicial branch was too until the creation of the Supreme Court), so separation of powers has never existed to the same extent in the UK, Australia, Canada etc. as it does in places like the United States.

Part of the reasoning behind checks and balances – as argued by James Madison when developing the US Constitution – is psychological. People generally don’t like having their  work interfered with from outside parties so they, therefore, have a motive to make sure it doesn’t happen to them by maintaining as much independence from the other branches of government as possible.

But there’s also a motivation to make sure other branches of government are living up to their responsibilities in terms of transparency, acting within the bounds of the law and making decisions through consensus and participation wherever possible. Taken all together, this is supposed to lead to good governance. When it doesn’t work there are mechanisms in place to hold people and institutions to account – though the Westminster System perhaps isn’t as strong here as it could be because it relies on constitutional conventions (which are effectively glorified “gentlemen’s agreements”). 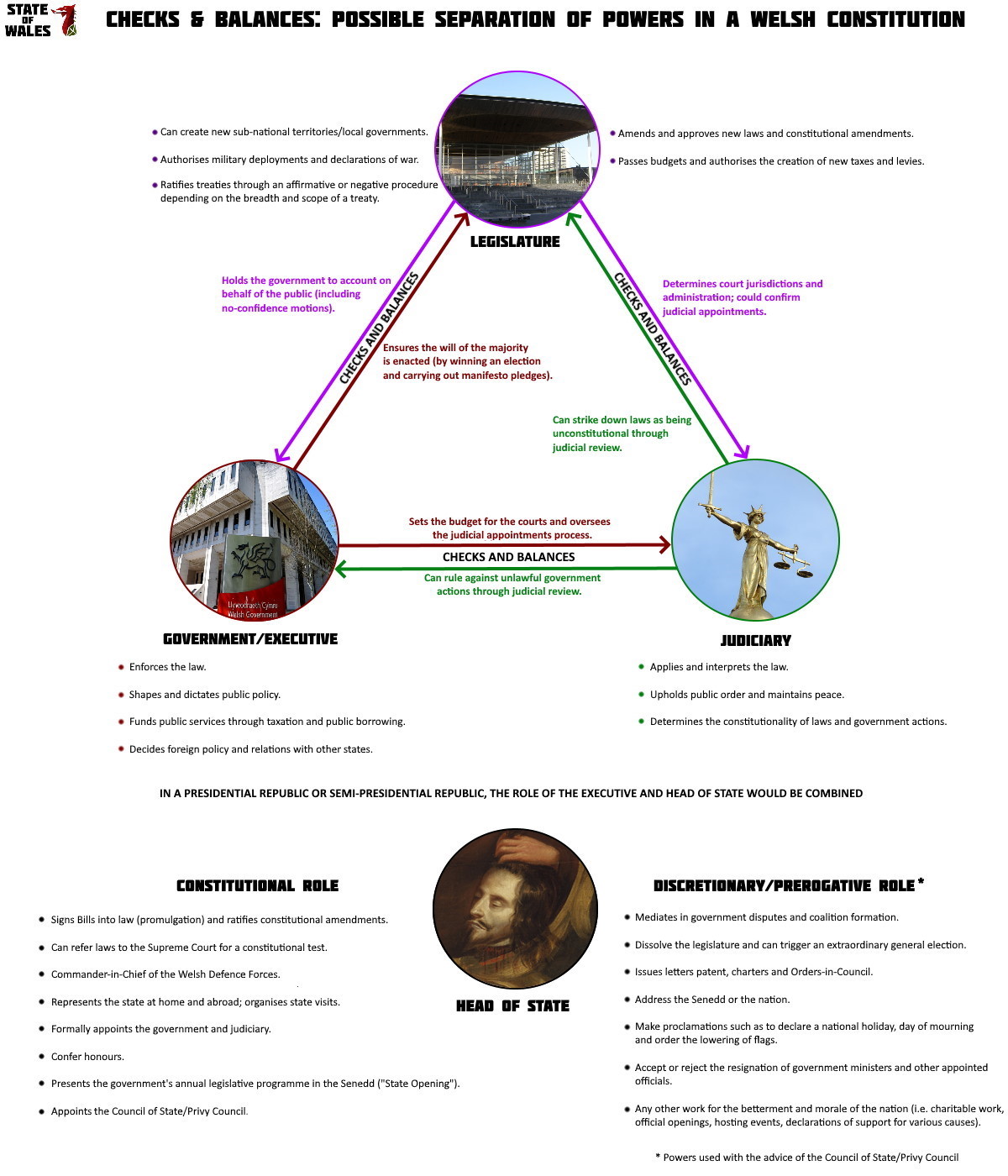 Whether republic or monarchy, there’s usually a body of advisers to the head of state – in the UK’s case the Privy Council.

The role of this body – regardless of what it might be called – would be to advise the head of state on the use of their discretionary and constitutional powers (some of which were provisionally outlined in the above graphic).

Some appointees could be mandatory – the Prime Minister and Deputy Prime Minister (where applicable), the Llywydd (and their equivalent in an upper chamber, if applicable) and at least one representative from the judiciary. As in the Republic of Ireland, former Prime Ministers could remain part of the Council, with the rest made up of personal appointments by the head of state.

It would probably meet sparingly – maybe 2-4 times a year at most and at any other time the head of state needs advice when weighing up whether to use their discretionary powers. You would assume that regular private meetings between the head of state and the Prime Minister (where applicable) would still happen – though they needn’t be constitutionally mandated.

In a presidential or semi-presidential republic (Part IVb) there would be no need for such a body as the cabinet and the president’s staff would act like it instead.

The Role of the Civil Service

The question here is whether the civil service and its role – as career bureaucrats and public administrators – needs to be constitutionally mandated or left to the law.

If it were included in the Constitution, then clauses could:

Accountability is when the processes by which an office-holder makes decisions on the public’s behalf are justified, criticised or changed. Accountability also means having a procedure to censure or remove office-holders when they’re believed to have failed in their responsibilities.

Politicians who think they’re above accountability usually turn out to be dangerous, corrupt or both; one of the signs a politician isn’t suited to the role is when they don’t like (reasonable) scrutiny of their policy positions or standards of behaviour. For Members of the Senedd, this is policed through the Standards Committee and the Standards Commissioner. For local councillors, it’s a role carried out by the Public Services Ombudsman. As said in Part Vb, the criteria for disqualification or expulsion from office or a recall election could be put in a constitution.

But what about more senior politicians, or even the head of state? For them, you have the option of no-confidence motions and impeachment.

No-confidence motions are the most commonly used procedure of this kind in parliamentary systems because any minister, Prime Minister or government that doesn’t have the support of a majority of members of their parliament either resigns (if an individual) or forces a new election to be called.

Putting this mechanism in a constitution would be straightforward, making a distinction between a no-confidence vote in an individual officeholder or minister (forcing their resignation), the Prime Minister (forcing their resignation and replacement within a set time to avoid an election), and the government as a whole (which would force dissolution and a new election).

Impeachment still exists in the UK Constitution but hasn’t been used in hundreds of years (the last attempt was led by Adam Price to impeach Tony Blair over the Iraq War) – namely because no-confidence motions are preferred and largely have the same effect.

The key difference is that while a no-confidence motion can be tabled at any time, impeachment implies explicit wrong-doing in office and requires a trial. If we had a presidential republic or semi-presidential republic, then impeachment procedures for a president would need to be included in a constitution if a no-confidence vote in the Senedd isn’t deemed to be enough to force a president’s resignation by itself (because they would have a direct elected mandate from the public to stay in office for the rest of their term).

Monarchies (Part IVa), presumably elective ones too (Part IVc), generally can’t be removed from office as a rule – though political pressure has occasionally forced abdications. If a monarchical system was seen to be failing Wales in any way (assuming we kept it in the first place), then the ultimate sanction would be to introduce a constitutional amendment (Part VIII) switching Wales from a constitutional monarchy to a republic.

Local Government: Should there be devolution/federalism within Wales?

Like the piece on the judiciary (Part VI), I’m not going to go into this in any great detail and will save it for if/when I come back to local government in the future.

Most constitutions include local and (where applicable) federal government structures developed under the principle of subsidiarity – that control over policy and public service delivery should be as close to the individual or the community as is practically possible; for example, national governments determine defence and foreign policy while local government is responsible for waste management and repairing the roads.

“Practically possible” remains one of the long-standing debates in post-devolution Wales. Despite years of on-off proposals for local government reform, we’ve failed to answer questions on who should control local services and at what level?

If we were to continue with unitary authorities and community councils, then all that would need to go into the constitution is a general power of competence for local authorities along with the necessary procedures for creating, merging or abolishing councils.

If, however, we wanted to go a bit further and devolve more powers from Cardiff down to local and regional level (possibly via the creation of federal or devolved states/regions) then there are several ways to do it.

In terms of the arguments for and against, I’ll leave it for whenever I return to local government – though if it needs stressing again, in all of these examples it’s about within an independent Wales  not the UK as a whole.

Emergency Powers in the Constitution

Safe to say this is a rather topical subject….

Routine emergency powers in the UK are currently set out through the Civil Contingencies Act 2004, though older laws – such as the Public Health Act 1984 and Emergency Powers Act 1964 – set out the powers deemed necessary to deal with a pandemic or epidemic and to govern the use of the military during a state of emergency.

If Wales continued to use an uncodified constitution then these arrangements would likely continue – these laws wouldn’t repeal themselves if Wales became independent.

If we had a written constitution, then clauses could be included to set boundaries on what can or can’t be done during a national emergency, whilst also giving government – at all levels -the necessary flexibility to deal with crises of all kinds. This could include:

A definition of an “emergency” – The Civil Contingencies Act defines an emergency as:

A requirement for a formal declaration of an emergency by a responsible office holder – The relevant office holder, whether it’s the head of state, head of government/Prime Minister or leader of a local or regional council, would need to make some sort of formal public declaration of an emergency before they can use emergency powers. Local authorities may be able to declare an emergency specific to their areas (i.e. a situation like the February 2020 floods) as a trigger for national-level support and also to use necessary powers to take specific proportionate measures in their local areas (i.e. curfews, closure of businesses and public places).

Granting broad powers to introduce regulations to deal with an emergency, but ensure they’re time-limited and subject to legislative scrutiny – As demonstrated during the coronavirus pandemic, regulations have been used to introduce emergency measures to protect the public. The regulation-making power can be broad, but appropriate checks and balances would need to be in place to ensure the government can be scrutinised. This could include a time limit (usually 21-28 days) after which the regulations automatically expire and require a vote to extend them from the relevant legislature. Regulations issued during an emergency could also be their own form of statutory instrument (“Emergency Power Orders”) as in the Republic of Ireland during the Second World War.

A power to limit, but not eliminate, some basic rights for the duration of an emergency – Emergency powers by definition have to restrict civil liberties. Under international law, states are allowed to suspend or restrict basic rights during an emergency; Article 4 of the International Covenant on Civil & Political Rights says that during an emergency, people remain protected from discrimination and some rights can’t be violated (i.e. freedom from slavery, freedom of conscience, protection from torture). The power to delay elections could be capped at one year, while any use of emergency powers that lasts longer than a certain amount of time may be subject to a mandatory independent public inquiry once the emergency measures are lifted.

Preventing the use of a Nazi Germany-style “Enabling Act” – A national emergency can’t be used as an excuse to suspend the legislature or enable primary laws (Bills and Acts) to be passed without the legislature’s involvement. If the legislature needs to close for whatever reason, then no new primary laws can be passed and all current laws are halted. There could be a block on amending the Constitution itself during an emergency too, while there should be a clause that the constitutionality of emergency powers can be challenged by the appropriate court.

It’s true there may be some situations where even these “handbrakes” would be inappropriate and would otherwise hamstring an emergency response. But those situations are usually so grim they present an existential threat to the state anyway. These would include situations where nobody would (be around to) care whether the government were acting legally or not (invasion, impact event, Cthulu, nuclear war).