Mistakes happen and attitudes change. With that, any future Welsh Constitution may have to change in order to remain a statement of the values of the nation.

While there would need to be enough slack to enable the constitution to be amended, at the same time the process would need to be difficult enough to ensure it’s done rarely – or only when politicians know that they’ll have both a consensus amongst themselves and public backing to “change the terms of the contract”.

One of the advantages of an unwritten/uncodified constitution (Part I, Part II) is that the amendment process would be as simple as changing the law – legislators don’t need a strict mandate and there’s no rule saying they can or can’t do this or that. If Wales retained an uncodified constitution than that situation would continue.

As for a written/codified constitution…

How do other nations amend their constitutions?

United States (33 amendments; 26 ratified, 1 repealed, 6 unratified) – There are two ways to amend the US Constitution. Firstly, an amendment can be approved by two-thirds of both houses of the US Congress (which is the most common method) and secondly a national convention can be called by two-thirds of US states. Once an amendment has passed Congress, it has to be ratified by three-quarters of US states (which would currently be 38 states). Amendments are repealed by another amendment. The only amendment to have been repealed to date is the 18th Amendment, which banned on alcohol sales and manufacture (prohibition).

Republic of Ireland (38 amendments; 26 approved, 12 rejected/not approved)– Any constitutional amendment has to be passed as a law in both houses of the Oireachtas before being put to the electorate in a referendum. If the amendment is approved in the referendum by a simple majority, people have a week to challenge the result before the amendment is signed-off by the President.

Switzerland (at least 312 referendums at a national level since 1848) – Every proposed change to the Swiss Constitution is subject to a referendum. The process is slightly different depending on the scale of the proposed change (an entirely new constitution vs an amendment). To explain this simply, amendments have to be approved in a referendum by the majority of voters as well as a majority of Cantons. While amendments can originate from the Federal Parliament, if 100,000 Swiss electors propose a constitutional amendment or a new constitution (“people’s initiative”), then a referendum has to be called for that too.

Iceland (7 amendments, plus unratified “crowdsourced” constitution) – In Iceland, any amendment to the constitution has to be approved in two consecutive parliamentary terms with a general election held in between. The only amendment that would be specifically subject to a referendum is the status of the Church of Iceland. 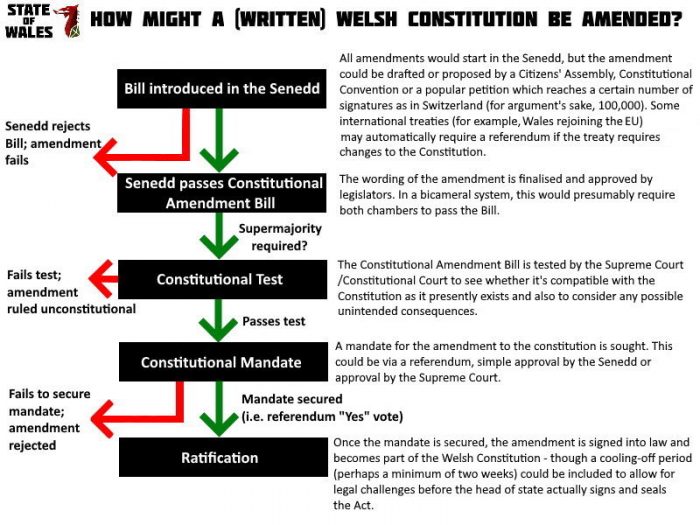 As for getting a constitutional mandate, there are three broad options:

Option 1: Referendum – If a Constitution is a contract between the state and its citizens (and future citizens) then, as a matter of principle, the people need to give their permission for any changes. A national referendum would be held to confirm any change to the constitution. Doing so would ensure amendments are only proposed when they’re deemed to be absolutely necessary due to the costs involved in holding a referendum.

Option 2: Legislative Approval – This is similar to the method in the United States, whereby amendments are tabled, finalised and approved by elected representatives alone (perhaps requiring a two-thirds majority) without a referendum. It would be a faster process, but it may also mean that if an extremist party was in control of the Senedd it may make it far easier for them to undermine the Constitution.

Option 3: Approval by a Supreme Court (Part VI) – As far as I know, no nation grants the power to approve amendments to its constitution to its judiciary. If there were a step involved where all proposed amendments need to go to the Supreme Court for a constitutional test in the first place, then it would save time if they simply decided whether an amendment was OK or not – though it would be undemocratic and would possibly politicise the judiciary as well.

All things considered, a referendum is probably the best means of securing a mandate.

There may be instances where minor adjustments need to be made to a (written) constitution without fundamentally changing the meaning of the constitution’s clauses themselves:

If there were a strict interpretation of the constitution – meaning that any amendment had to go through a formal amendment process – then you would possibly end up in a situation where a referendum would need to be held on Oxford commas and the use of Comic Sans.

So alongside the “proper” amendment provisions, a constitution could include a process for correcting amendments of the kind listed above, which could be done via secondary legislation.

As the ultimate guardians of the constitution and its interpretation, correcting amendments would probably have to be proposed by the Supreme Court, then tabled as a regulatory instrument (“Constitutional Correcting Amendment Order”) by the Attorney General (Part VI) and require the approval of the Senedd.

Entrenched clauses: Should parts of a Welsh Constitution be unamendable?

Some written constitutions – notably Germany, Greece and Brazil – contain clauses which are either very, very difficult to change (i.e. requiring a supermajority vote and/or a referendum) or can’t be changed at all.

It seems to be more common in states which have lived through authoritarian or extremist governments which abused the constitution or used loopholes to award themselves unquestioned power. That said, it may be worth considering for Wales too as an additional set of handbrakes unless we continue with the principle of parliamentary sovereignty.

Requiring a referendum in itself is a form of entrenchment because it’s a major hurdle to jump, but parts of the constitution which could be subject to an “eternity clause” may include, amongst other things: